480 CPM cadres cross over to BJP 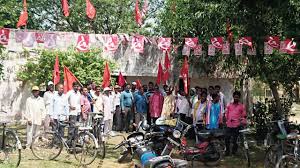 Around 480 CPM supporters were among 500 people from multiple parties who joined the BJP on Saturday, according to sources.

Sources in the party said as many as 480 of the 500 belonged to the CPM, which means only around 20 people crossed over from the other Left parties and the Congress-backed trade union.

In Ramnagar of East Midnapore, about 1,000 supporters of former CPM MLA Swadesh Nayak, who joined the BJP in October, followed suit on Saturday. The party’s minder for Bengal Kailash Vijayvargiya was present at the event.

Niranjan Sihi said Saturday’s development would not hurt the party’s organisation in Haldia.

“None of our prominent leaders has switched to the BJP. People of Haldia are with us,” Sihi said.

However, another CPM leader said the exodus “should not be taken lightly before the polls”.