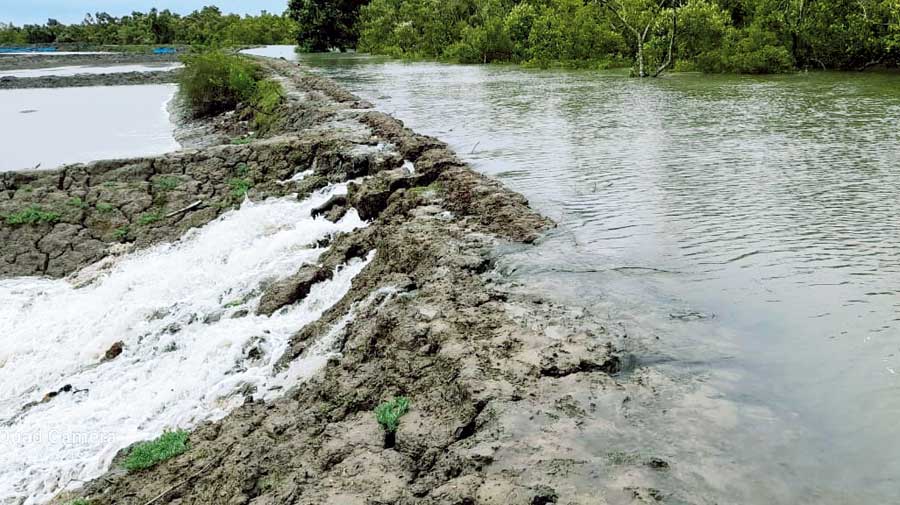 A breach in an embankment along a river at Sandeshkhali in the Sunderbans.
Pashupati Das
Subhasish Chaudhuri , Snehamoy Chakraborty   |   Calcutta   |   Published 26.05.21, 01:40 AM

Much before Cyclone Yaas’s expected landfall, several areas in three coastal districts of Bengal were swept away on Tuesday morning because of high tidal waves coupled with strong winds.

Local sources claimed that stretches of embankments that succumbed to the continued blow of wind from the early hours of Tuesday were mostly those where cyclone Amphan had hit last year and wreaked havoc. The stretches damaged last year could not be repaired owing to the Covid-19 pandemic.

At most places, local people, who joined hands with the administration to repair vulnerable stretches of the embankments on emergency basis barely 72 hours ahead of the expected landfall of Yaas, were seen blaming the irrigation department for negligence in taking up the work in time.

But irrigation officials claimed that back-to-back cyclones that had hit the sea and river embankments left little time for them to try for a permanent solution.

Former minister and CPM leader Kanti Ganguly, who positioned himself at Raidighi in South 24-Parganas to assist villagers in the face of Yaas, said temporary repairs of the embankments were useless. “I would request Mamata Banerjee to construct permanent guard walls to save the Sunderbans and other vulnerable areas.”

Irrigation minister Saument Mahapatra said: “We have stacked all materials for repairs that will be taken up once the cyclone passes.”

Officials of the North 24-Parganas district administration had to face the wrath of villagers at many places during their inspection.