Basumati brought back to life 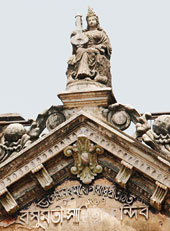 Masik Basumati, the once-popular monthly literary magazine started in 1922, which had disappeared from the news stands for quite some time, is back in circulation from February. Its silver jubilee number, which contains the works of some of the best writers and thinkers of Bengal, was reprinted at the same time, and its Nababarsha or Bengali new year number and Rabindranath issue are also in the pipeline.

This is just the beginning, and if the management, with considerable help from Mamata Banerjee, succeeds in keeping up the effort, this sick publishing house stands a good chance of revival. Published by Basumati Sahitya Mandir that used to bring out innumerable classics of Bengali and world literature for a pittance and the daily Dainik Basumati as well, the monthly magazine was a vast literary treasure trove to which the cream of Bengali litterateurs would contribute.

Shyamal Biswas, the managing director of Basumati Corporation Limited, as it is known today, is confident that he will soon be able to reprint some of the classics that are in demand but are out of print now. When publication stopped, the unit survived on “job work”, that is printing material for the government. Last April 2011 to February 2012, the turnover jumped to Rs 5 crore and the net profit Rs 2 crore plus, against a turnover of Rs 85 lakh in 2010-11, and Rs 35 lakh in the preceding year. He is trying to turn a liability into an asset, although there is not much manpower and the machinery is three decades old.

The organisation, a state government property, was acquired by the Bengal government in 1974 when Siddhartha Sankar Ray was chief minister. The building from which it has operated for decades spreads over a huge area near Sealdah on BB Ganguly Street. It is a massive though shabby pile with prominent Rajasthani architectural features from its portal onwards, and is in need of urgent repairs. On the top of the pediment above the terrace is an image of Saraswati playing the veena, and under it are written the words in stucco in Bengali: “Basumati Sahitya Mandir, Established by Upendranath Mukhopadhyay in 1287” — a legend repeated on the portal as well.

A wooden staircase leads to the editorial offices and at its head hangs the faded portrait of Satishchandra Mukhopadhyay, Upendranath’s son, who took over the reins of the organisation after his father’s death. On the first floor facing the terrace is a huge stained-glass panel with rectangular sections, depicting Indian motifs like lotuses, the swastika, the globe, and a portrait of Upendranath as well. In the distant past, the owners of this building were Dutch, according to an article that appeared in the golden jubilee issue of Dainik Basumati in 1964.

Thereafter, The Society for the Promotion of Industrial Art opened an industrial art school there. Many students were trained here by foreigners when in 1864, the Bengal government took over charge of the institution. Exhibitions used to be held here and one of the residents of this building that extends up to Lady Dufferin Hospital was Olinto Ghilardi, who was Abanindrnath’s art teacher. Next, the building, which was owned by three foreigners, housed National College under Rishi Aurobindo Ghosh.

Upendranath bought the building to publish Basumati, although his first workplace was in Beadon Street, followed by Grey Street and ultimately Bowbazar. Satishchandra used to live in this building with his family and pujas used to be celebrated with fanfare. Upendranath, who was a devotee of Ramakrishna and was close to Vivekananda as well, had started Basumati Sahitya Mandir in 1881 in humble quarters. His publishing venture flourished with Ramakrishna’s blessings, and Vivekananda himself had written the motto of Dainik Basumati, “Namo Narayanay” — in other words, service to humanity.

But before that, inspired by Vivekananda, Weekly Basumati, a digest of world news reported and interpreted for the common man, began to be published from 1895.

On the 20th year of the publication of the weekly, and within a week of the beginning of World War I on August 6, 1914, Dainik Basumati was launched. For decades, the daily used to be printed in the oldest rotary of India. When the Bengal government cracked down on Dainik Basumati because of its uncompromising editorials, and stopped its publication in 1941, Basumati Telegram was launched.

Basumati has a troubled past. Internal problems began in 1961, and after Ashok Sen, former law minister and Congress MP, acquired it in 1962, it closed in 1970, although it reopened the next year. Under the Left Front government, it stopped its operation from Calcutta from September 1992. It moved to Siliguri where it finally closed in 2003. Some workers started a movement against the closure. The struggle has been fruitful and Basumati has once again seen the light of day.