Peak of the high tide on Saturday was at 3.04pm, when the height of river water was 19.82ft from the bed 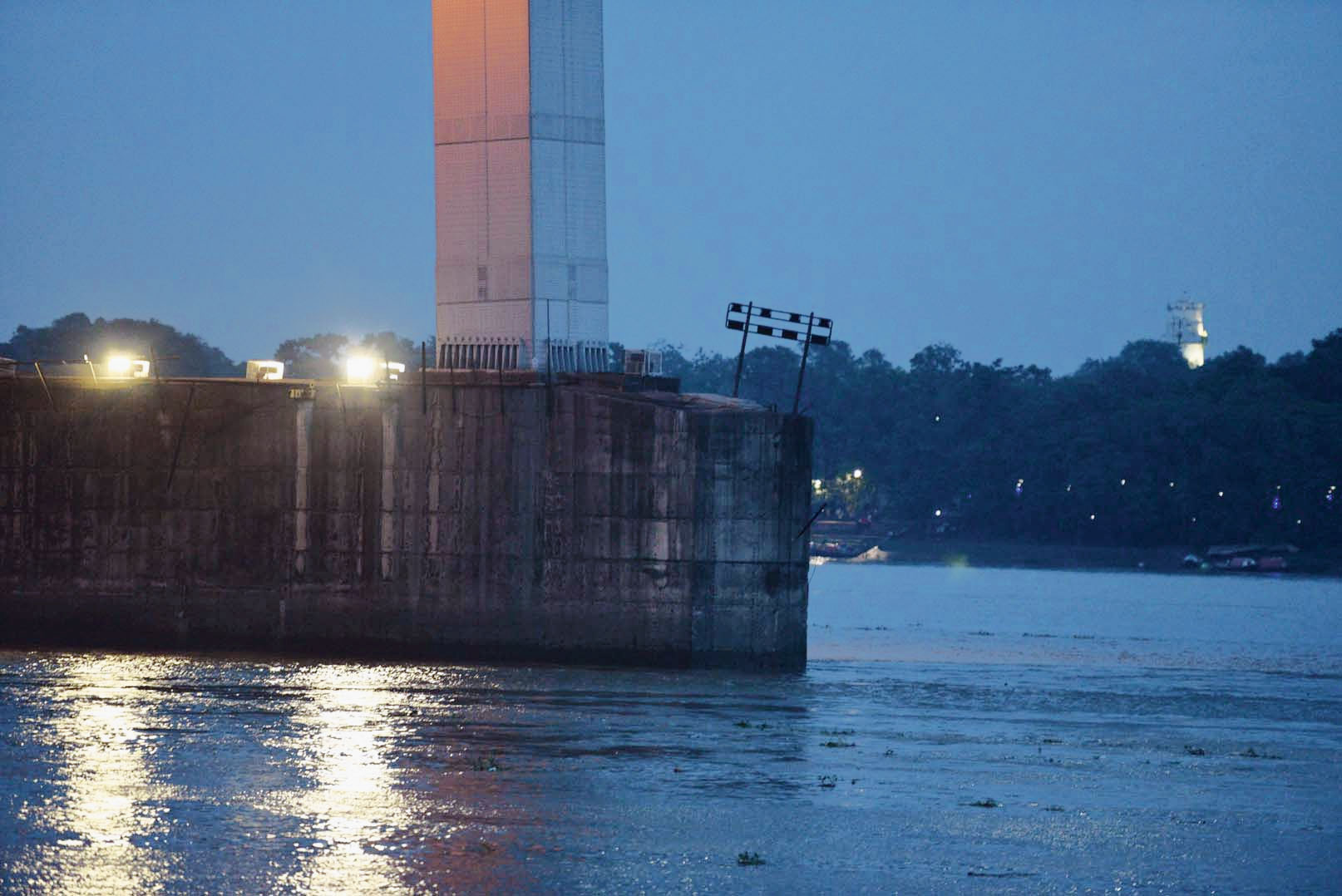 A barge got unhinged from its anchor in the Hooghly on Saturday afternoon, drifted away and came to a halt after hitting a concrete structure built to protect piers on the Howrah bank of Vidyasagar Setu.
(Gautam Bose)
Subhajoy Roy   |   Howrah   |   Published 03.08.19, 08:07 PM

A barge got unhinged from its anchor in the Hooghly on Saturday afternoon, drifted away and came to a halt after hitting a concrete structure built to protect piers on the Howrah bank of Vidyasagar Setu.

Port trust officials and a river expert said a tidal bore in the river caused the water to swell and the barge probably got unhinged from the anchor under the impact of the powerful tide.

The impact of the new moon on the tide could have contributed towards making the tide more powerful.

A bridge engineer, who saw the picture of the barge stranded after hitting the concrete, said it wouldn’t affect the pier.

An official of the Calcutta Port Trust said that the barge was carrying coal to the Kidderpore dock and was anchored in the river near Garden Reach as it was waiting for its turn to enter the dock and unload. The pressure and flow of water unhinged the anchor and swept away the barge, the official said.

“There was a very loud sound. The barge came and hit a concrete platform that was built during construction of the flyover,” said Ajit Singh, a college student who lives near the Howrah side of the river and an eyewitness. 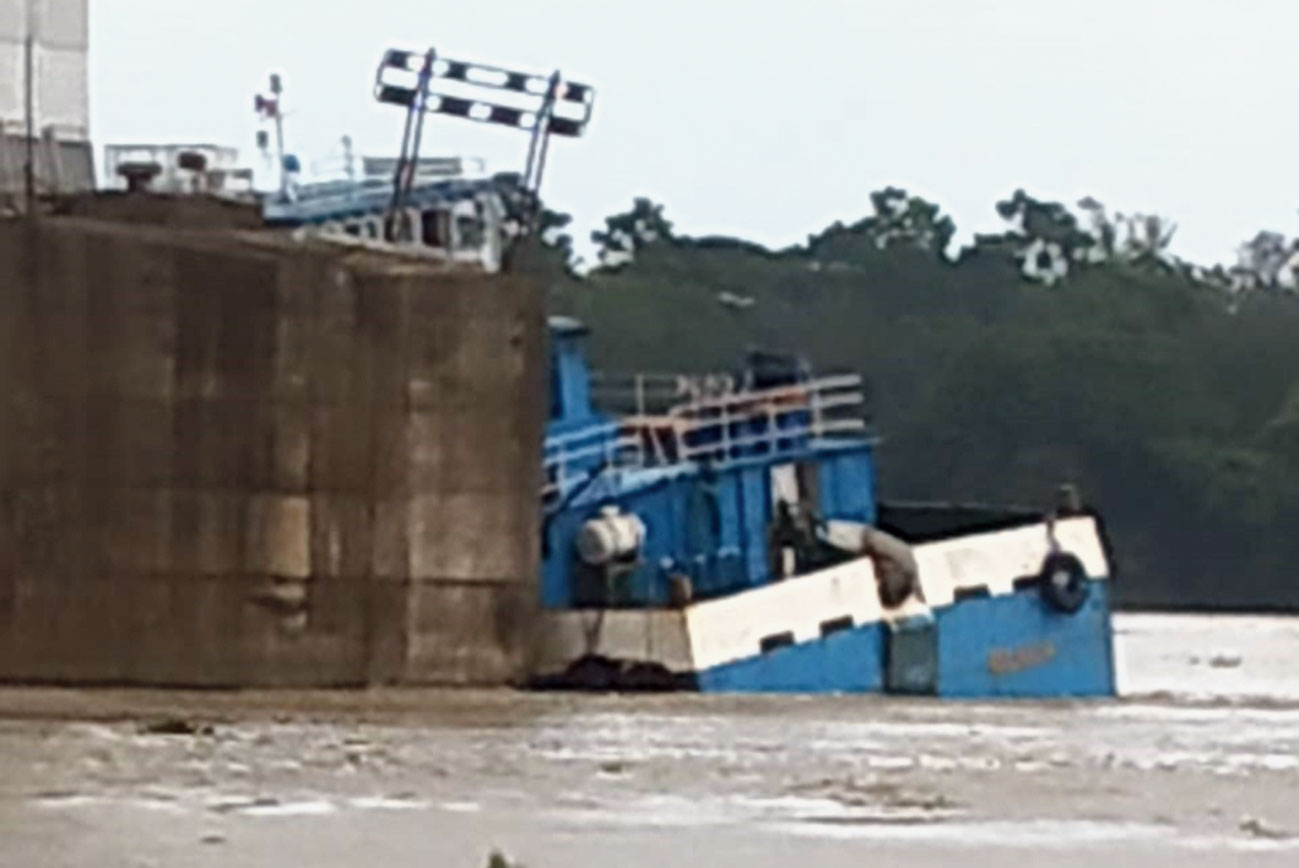 A barge. Another vessel was later brought in to tow away the barge. Port trust officials and a river expert said high tidal waves possibly resulted in the barge getting detached from its anchor.
Telegraph picture

River Traffic Police officers, as well as port trust engineers, had reached the site soon. A police officer said that a barge was brought to the site.

The new barge pushed the affected one and took it towards the Kidderpore dock, where the barge was supposed to unload the coal.

After it rammed into another barge, one of its front chambers sustained damage and developed leaks.

“Water has started to enter the chamber. The barge has been kept near the dock. Our engineers, as well officials from the company that operates it, are present at the site,” said the port trust official.

River expert Kalyan Rudra explained the possible reasons that could have resulted in the barge being drifted away. He said that water from the Bay starts entering the Hooghly and reaches its peak in around four hours and this period is known as tidal bore or baan in Bengali. Saturday’s accident happened during the tidal bore.

“The swelling of the river water is very high and it is very powerful during the tidal bore. It seems the barge got drifted away because of the powerful tide,” he said.

Rudra said a couple of other factors could have been responsible also for the unhinging of the anchor. Tides are higher for a few days after full moon and new moon, he said.

The latest new moon was on Wednesday-Thursday.

“Besides the estuary of the Hooghly is funnel shaped. The width of the river is about 3km at Sagar, 2km at Diamond Harbour and it reduces to 300 metres in Calcutta. The same volume of water naturally gets tapered and swells up,” he said.

Bridge engineers who saw the picture of the barge after it hit the concrete platform said there was nothing to worry about the health of the bridge.

“The concrete protection around the pier was built precisely to protect it from such accidents,” said the engineer.

The barge, which is about 25metres long, had loaded the coal from a larger ship near the Bengal coast, said port trust.