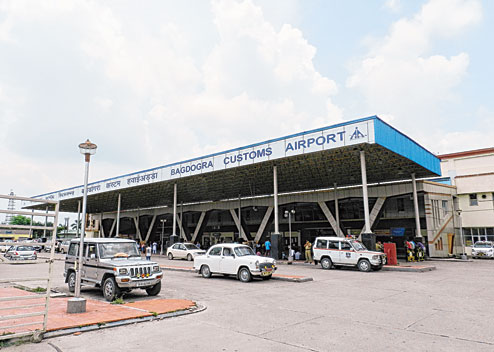 Siliguri, May 11: The number of flights at the Bagdogra airport has come down in the last fiscal compared to the 2014-2015 financial year primarily because of inclement weather and absence of Instrument Landing System (ILS).

"Inclement weather and absence of the ILS were to blame for a decrease of 12.7 per cent in the number of flights. As far as the cost of Aviation Turbine Fuel (ATF) is concerned, Bagdogra is the cheapest airport in India for airline companies because the state had waived fuel surcharge. There is no reason for airliners to shun Bagdogra. But issues like inclement weather and absence of the ILS kept the flights away," said an official of the AAI.

"We know that the growth rate of 43.6 per cent cannot repeat in each fiscal. But there should have been at least a 15 per cent rise or so," he added.

The figures of the last fiscal show that there was a high flight occupancy rate compared to 2014-15.

Sources at the airport said airline companies were not ready to operate flights in evenings and early mornings unless ILS was installed.

"Added to it was the cancellations during rainy and winter seasons every year. If the ILS is installed, flights can land and take off in low visibility and during bad weather," said a source.

In the last fiscal, the source said, flights were cancelled at least six-seven days during the monsoon and winter.

"Around 20 to 22 flights were cancelled a day, causing inconvenience to thousands of passengers. Flight cancellations on account of adverse weather happen every year. But last year, there were more days affected by the bad weather. Besides, some flights that had operated in 2014-2015 withdrew last year as the airport authorities couldn't keep their word of putting in place the ILS," said the source.

The ILS is yet to be put in place as the state government is unable to acquire the land needed for the project.

According to AAI sources, it needs a total of 24.16 acres of land for installing the ILS to guide planes at night and during inclement weather. Out of the 24.16 acres, 9.97 acres are with the Indian Air Force.

The remaining 14.19 acres were with 15 families who had encroached on the land. The government had handed over compensation to most of the families and they vacated 12.91 acres.

The airport authorities have also requested the state government to provide 118 acres to expand the terminal building and add allied facilities. The state, however, rejected the plea outright, prompting the AAI to scale down the plan and seek only 80 acres.

"The government said it could at best provide us with only 30 acres. Our senior officials are still having talks with the state," said the AAI official.