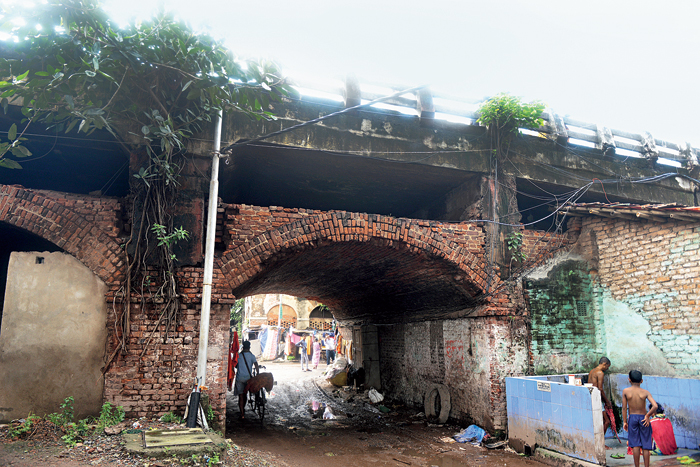 Piers on a stretch of the new approach to the Chitpore bridge from Cossipore Road were built on arches. Engineers said the piers should have been ideally built from the ground.
Pictures by Bishwarup Dutta
Subhajoy Roy   |   Calcutta   |   Published 29.09.19, 08:34 PM

The ban on buses on the Tallah bridge kicked in on Sunday morning but the roads through which they are being diverted are dotted with potholes or have become narrower because of parked vehicles.

Metro toured the roads on Sunday morning and found that the poor condition of the roads and parking could trigger huge snarls from Monday, the first working day since the curb on the busy link between the city and the northern fringes came into effect.

Vehicles are routinely parked on both sides of the carriageway, in violation of rules, on Raja Manindra Road, Dum Dum Road, Northern Avenue and RG Kar — the thoroughfares through which the buses that used to ply through the Tallah bridge will be diverted.

The precarious state of the 57-year-old bridge has prompted the government to make the structure out of bounds for buses and goods vehicles. The ban on trucks is being enforced since September 21.

Only cars and two-wheelers can ply down the bridge, at a speed not exceeding 10kmph. Pedestrians are allowed but police may regulate their flow.

The police have planned to divert a large number of buses from Chiria More. The vehicles will travel via Dum Dum Road, Northern Avenue and Belgachhia on their way to Shyambazar.

Some buses will also be diverted from the Paikpara-BT Road crossing. They will move towards Shyambazar through Raja Manindra Road and RG Kar Road.

On Sunday, this newspaper saw many goods vehicles, buses and rickshaws parked on both sides of Raja Manindra Road and RG Kar Road. Large trucks were parked on either side of Cossipore Road, occupying up to 12ft of the carriageway.

“The situation will be unmanageable if cars, goods vehicles and rickshaws are allowed to park along the roads. The stretch in front of Belgachhia Metro station needs attention, too,” said a resident of Tallah, who have to take an alternative route to go to work.

The space in front of the station has a rickshaw stand and an autorickhaw terminus.

To add to the problem, there are potholes on Cossipore Road and RG Kar Road. Khagen Chatterjee Road, which connects Chiria More and Cossipore Road, is in a sorry state, too.

Right at the centre of the intersection of Cossipore Road and Khagen Chatterjee Road, there is a huge pothole. A little south from there, there is another crater in front of a fuel station.

The police feel many smaller vehicles will enter Cossipore Road from BT Road to avoid snarls on the Tallah bridge.

A senior official of the Calcutta Municipal Corporation said the civic body had started repairing Cossipore Road and Galiff Street.

“Khagen Chatterjee Road is maintained by the PWD. Mayor Firhad Hakim has called a meeting on Monday afternoon to discuss the condition of the roads in Tallah,” the official said.