Welcoming the Most Revd. and Rt. Honourable Justin Welby, Lord Archbishop of Canterbury 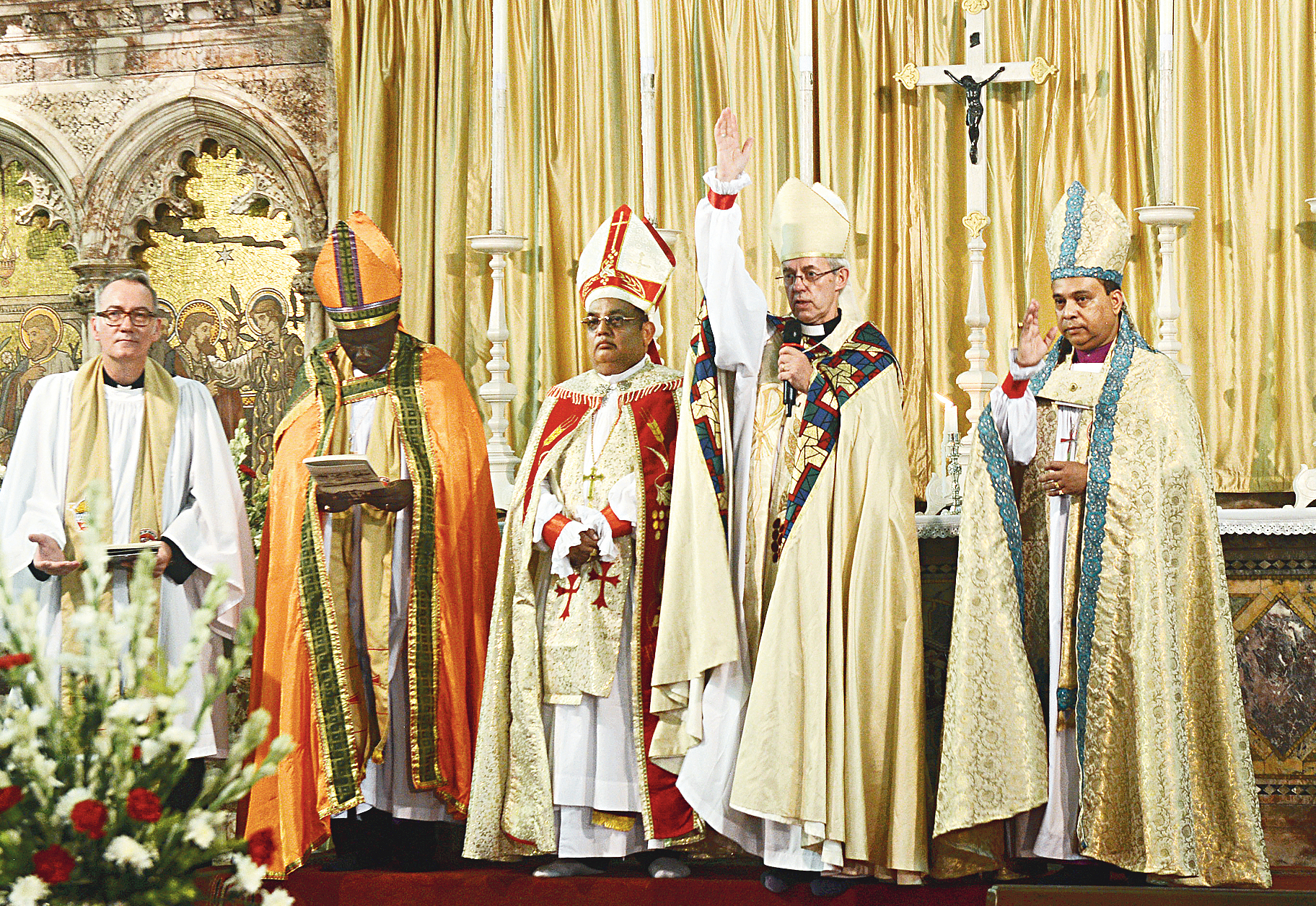 The Archbishop of Canterbury, the Most Revd. and Rt. Honourable Justin Welby (second from right) blesses the congregation at St. Paul’s Cathedral after a thanksgiving worship service on Sunday morning.
Pictures by Bishwarup Dutta
Hilda Peacock   |   Calcutta   |   Published 08.09.19, 07:47 PM 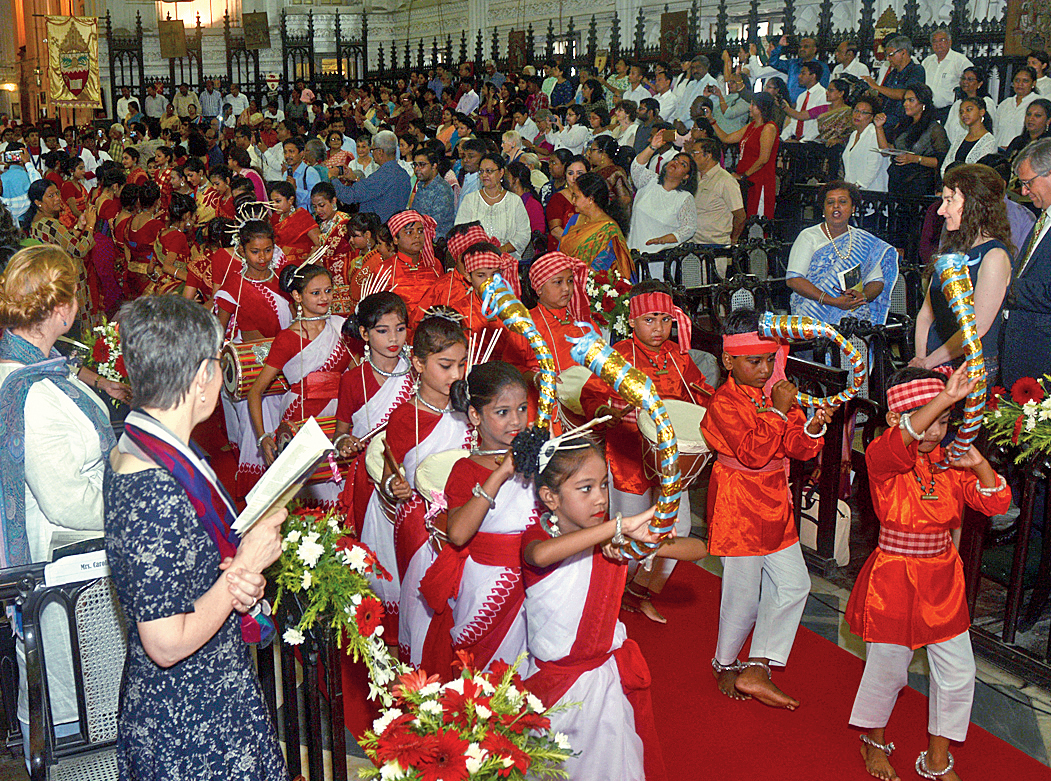 This long-awaited day had been planned many months ago. It is therefore no coincidence that the renovation of the Western corner of the cathedral with the Bishop’s throne, the floor slabs and tiles and much of

the altar and the area surrounding it, which was under repair and renovation, was completed just in time to welcome the Most Revd. and Rt. Honourable Justin Welby, Lord Archbishop of Canterbury for this most important service.

Much planning has gone into it and every detail meticulously worked out. The early morning showers did nothing to dispel the atmosphere of celebration and euphoria that greeted each worshipper as they walked into this historic church.

People were already in their pews an hour before the commencement of the service. The organ was playing softly, the red and white flowers tastefully placed along the aisle, the pulpit and the altar along with the candles only made one conscious of the beauty that is so much part of St. Paul’s.

The church was filled with the regular worshippers, as also visitors from different churches of our city. We were honoured to have the British Deputy High Commissioner Bruce Bucknell. There were senior members of the Church of North India headed by the Most Revd. Dr Prem Chand Singh, Moderator and the Bishop of Jabalpur. Our own Bishop, the Rt. Revd. Paritosh Canning, along with others from Delhi, Revd. Abir Adhikary, Principals of schools and Diocesan institutions, all made up the congregation on this auspicious day.

The service began with the unveiling of the plaque, commemorating the Archbishop of Canterbury’s visit to the cathedral. The Bishop of Calcutta thereafter prayed over and blessed this plaque.

One of the most endearing moments of the service was the processional hymn. Unlike other solemn and staid processions, this one was an outburst of joy, music and singing as the pupils of St. John Diocesan School entered with a tribal song and dance. The song “Jeevan Rupi Mor Donga Aahe”, is specially significant when one realises that a large number of Indian Christians come from tribal communities. The truth of this came home to me when I noticed that the procession of the Clergy which followed the dancers, seemed familiar with the song and were actually singing along with the dancers! In the procession the Visiting Clergy, the Clergy of Calcutta Diocese, the Visiting Bishops, the Presbyter-In-Charge of St. Paul’s Cathedral, the Archbishop’s Chaplain and the Archbishop of Canterbury followed the dancers in a file. They were followed by other dignitaries and finally the Bishop of Calcutta, the Rt. Revd. Paritosh Canning entered the church.

Each member of the congregation was given a booklet which contained the order of the service, all the prayers and hymns so that the thanksgiving service could proceed without announcement or interruption. After the Presbyter-In-Charge welcomed the gathering, the service proceeded according to the liturgy of the Church of North India. The Rt. Revd. Anthony Dangasuk Pogo, the adviser on Anglican Communication Affairs read the Collect for the day. The service proceeded with many Clergy and Laity participating.

The Archbishop of Canterbury, the Most Revd. and Rt. Honourable Justin Welby, and his wife Caroline Welby were then felicitated by our Moderator and Bishop. The Archbishop was invited to give the message. He spoke feelingly of the extraordinary relation with the CNI and Canterbury. The CNI, he said, was a united and uniting body that embraced 85 million people in the Anglican tradition. He said that he was deeply humbled to be a part of this all-embracing body. He compared the church to the human body where if one part suffers, the whole body suffers. The Archbishop exhorted us to come and learn deeply that at the heart of the Christian ministry is the Pastoral Role. It is the role of the Good Shepherd who gives His life for the sheep.

He addressed the Clergymen that even when they are in danger of exile, like Ezekiel, they must warn the people of the need to lead lives that are holy. He called on us to love and care and shepherd one another. He spoke with great emphasis on the dangers of misuse of power. He said, we must turn away from power and offer love and service instead. He told us, like Jesus, we must be willing to wash each others’ feet. We must love one and another and we need not be like-minded to follow this command. We must be willing to bring back those who have wandered away because we are made in the image of the Good Shepherd.

No thanksgiving service is complete without a mention of the music. The old familiar Amazing Grace set to a new arrangement was sung by the Augmented English Choir accompanied by Mr Shanu Banerjee on the piano and Mr Vachhe on the horn. The Bengali Choir “Shantir Doot Aamra Sabai Shanti Chharabo” was led by Mr Kalyan Banerjee.

Both choirs outdid themselves and confirmed the rich tradition of music that our city boasts of. The two hymns, Now Thank We All Our God and the CNI hymn, the chants and the prelude and postlude were played on the Cathedral organ by the Church Organist Dr Samuel Massey.

The lines for the Communion were long, but moved quickly because of the orderly way in which it was served. After the service, the Archbishop visited the Cathedral Friendship Centre and spent time with the congregation at the Parish Hall. St. Paul’s has always been the church for the city. Both the city and the church are proud to have hosted the service and strengthened links between Lambeth and Calcutta.