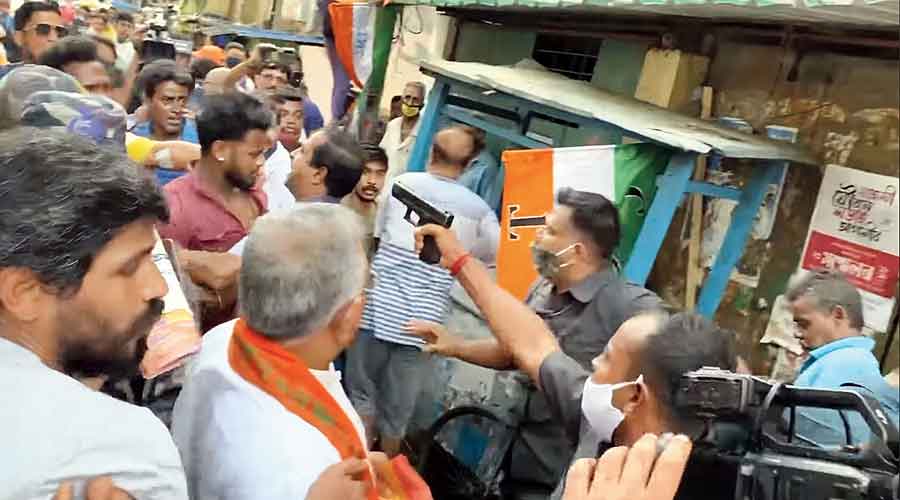 The BJP on Monday urged the Election Commission of India to impose Section 144 of CRPC, which prohibits assembly of four or more people, in the entire Bhowanipore Assembly segment during the bypoll on September 30 to ensure free and fair voting.

Chief minister Mamata Banerjere is contesting the by-election and the BJP has fielded Priyanka Tibrewal.

In their meeting with poll panel officials in Calcutta, BJP representatives led by Rajya Sabha member Swapan Dasgupta also sought monitoring of the entire poll process through webcasting and CCTVs and deployment of central forces at all booths.

The three demands, BJP sources said, were rolled out as part of an attempt to create a narrative that the situation in Bhowanipore was not conducive to polls. The party has put forward these demands before the Chief Electoral Officer, West Bengal, after two of its MPs — Dilip Ghosh and Arjun Singh — were manhandled while they were campaigning in Bhowanipore on Monday.

Although Dasgupta took care to explain the reasons behind placing the three demands, some BJP leaders, including Ghosh, had earlier sought complete suspension of the Bhowanipore bypoll, claiming there was no scope to hold free and fair voting at the moment.

Sources in the BJP said the two different sets of demands from the saffron camp — barely 60 hours before the by-election — exposed the chinks in the party, which got a drubbing in the Assembly polls held in March-April.

“Some senior state leaders met at the Hastings office on Monday evening and the decision to send a delegation to the poll panel was taken there,” a source said.

This person added that while it had initially been decided that the party would demand “complete suspension” of polls, as voiced by Ghosh, the national leadership swatted the idea.

“Delhi was absolutely against the decision. It would have been yet another face loss for us if we had demanded suspension of the by-poll three days ahead. This is why there was a change of mind, which evidently Dilipda was unaware of,” this source said.

Monday was the last day of campaigning for the bypoll.

The Midnapore MP was allegedly attacked by Trinamul supporters during his door-to-door campaign at Jadubabur Bazar in Bhowanipore. Ghosh had entered a vaccination camp organised by the CMC. When he emerged from the camp, some people started shouting “Go Back!” slogans at Ghosh.

After a point, the brawl went out of hand and a scuffle followed and two BJP workers received serious injuries — one was bleeding from the head. The injured were first treated at the SSKM Hospital and later transferred to a private nursing home.

Several local people said the situation became critical only after two of Ghosh’s guards had pulled out their guns to scare the crowd away.

Earlier in the day, the BJP sources claimed, Barrackpore MP Singh was also heckled in front of Sitla Mandir in the same ward.

The BJP alleged that the attackers were “goons of Shri Madan Mitra”.

“In both the instances, there was a complete absence of Calcutta police again raises the issue of the partisan attitude of the DC South Division, Shri Akash Magharia,” BJP’s letter to the CEO alleged. The delegation demanded removal of Kamarhati MLA Mitra from the area and Magharia from all administrative duties till the polls.

Sources said a BJP delegation would meet ECI officials in New Delhi on Tuesday and inform them about the incident.

The Trinamul Congress denied all allegations of the BJP. The official twitter handle of the party criticised how “Ghosh’s security guard audaciously took out his gun, pointed it at the people and started threatening them”.

State’s Minister Firhad Hakim said: “The common people are outraged by the nonsense spoken by BJP leaders and hence, they have protested. There is no question of stopping them.”

The Election Commission had sought a report from the state government over the incident, sources in the poll panel said. The source added that a report had been received but refused to share details

“We will be discussing issues related to Bengal and how to go about in the state in future,” Ghosh told journalists.