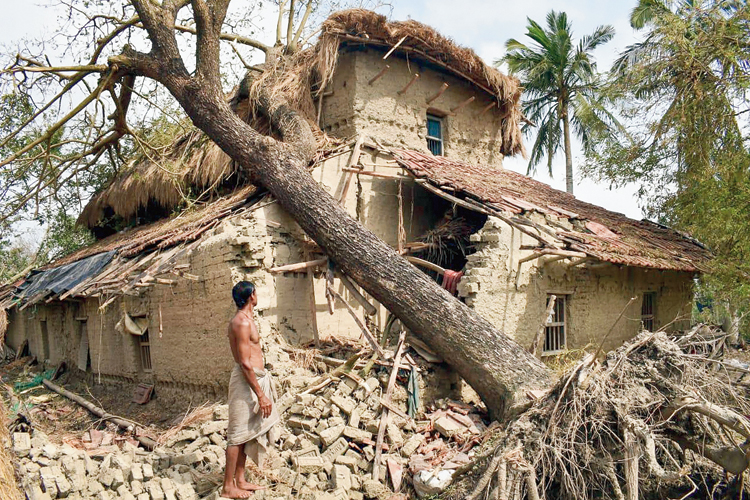 The inter-ministerial central team (IMCT) held a meeting with top state government officials at Nabanna on Saturday afternoon to assess the damage caused by Cyclone Amphan.

The meeting came in the wake of the IMCT’s two-day visit to parts of North and South 24-Parganas that got ripped apart by the May 20 superstorm.

The state government apprised the IMCT that Bengal suffered a total loss of Rs 102,442 crore due to the cyclone, a highly placed source told The Telegraph.

The figure was arrived at by estimating the damages caused to dwelling units, school and hospital buildings, roads and in sectors such as agriculture, power, horticulture and animal resources development.

A source in the state government said that top officials, including Bengal chief secretary Rajiva Sinha apprised the IMCT, led by joint secretary of the ministry of home affairs Anuj Sharma, about the total damage caused by the cyclone that ravaged several districts, including Calcutta.

“The IMCT visited some of the worst-hit areas of South and North 24-Parganas and took note of the damage caused by the cyclone on the ground. We told them about our assessment of the damage,” said a senior government official.

According to the assessment made by the state government, the cash value of the damage done to dwelling units by Amphan is around Rs 28,560 crore. In the agriculture sector, the value of damage is Rs 15,860 crore while in case of industries and micro, small and medium enterprises, the damage is to the tune of Rs 26,790 crore.

An official said that a memorandum of claim by the Bengal government would be sent to the IMCT within seven days. However, senior officials were not sure about the quantum of funds flowing from Delhi.