Home mute witness to a year of govt neglect

Last year, allegations about irregularities in preparing the list of Amphan compensation beneficiaries had snowballed into a major controversy 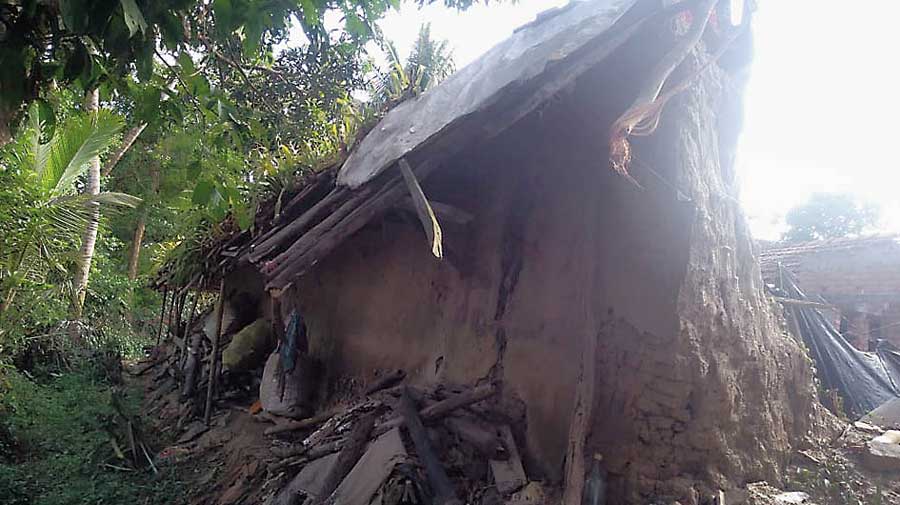 Swadesh Paria’s Amphan-hit home in Kolagachhia village, Khejuri, in East Midnapore district. The aged man has received no compensation from the government yet
Telegraph picture
Anshuman Phadikar   |   Calcutta   |   Published 20.05.21, 06:44 AM

A year after cyclone Amphan, Swadesh Paria, 70, has given up hope of having a proper roof above his head ever again.

The septuagenarian daily labourer from East Midnapore’s Khejuri lives with his wife Anjali in a dilapidated structure he once called home, a major part of which was razed to the ground by the cyclone on May 20 last year.

What is left of Swadesh’s house is a room but it can shelter the old couple as long as its walls don’t fall. However, even the walls don’t evoke much optimism.

As Thursday marks the first anniversary of Amphan, Swadesh recalls the multiple attempts he made to get compensation offered by the Bengal government for victims of the cyclone. He has not received a single paisa yet.

“I had spoken to the masons last year. They estimated the cost of repairing my house as Rs 25,000 to Rs 30,000. Had I received the relief amount of Rs 20,000 (announced by the Mamata Banerjee government) I would have managed the rest,” Swadesh told The Telegraph.

“The only thing I had received was a tarpaulin from the panchayat after the cyclone. Later, I made multiple applications to the panchayat and the BDO for compensation money, but all in vain,” he added.

Swadesh and Anjali are residents of Kolagachhia village under the Khejuri assembly. His three sons, migrant labourers, live far away. His house, Swadesh recounts, had two rooms, a kitchen and a toilet. After the havoc wreaked by Amphan, one derelict room is all that is left.

Anjali, 61, believes that they have been made victims of partisan politics.

Swadesh Paria’s Amphan-hit home in Kolagachhia village, Khejuri, in East Midnapore district. The aged man has received no compensation from the government yet
Telegraph picture

“We are CPM supporters. This is why we weren’t helped by the (Trinamul-run) panchayat or the administration,” she accused. “These walls are all that is left of our house. Now we hear another cyclone is coming. How are we to survive?” she asked.

Himangshu Das, the defeated CPM candidate of Khejuri, said more than 1,000 homes in this Assembly constituency qualify for the compensation but have been deprived of it. He also alleged partisan politics.

The chief of the local panchayat, Mithurani Mondal, denied such allegations. She, however, admitted that the compensation was yet to reach some families.

“Politics is not the reason. Some applicants provided wrong account details. Some applied late. This is why they have not received the money. However, we will look into Swadesh Paria’s case as it has been brought to our knowledge,” Mondal said.

Khejuri Block 1’s BDO, Partha Hazra has also promised to start a fresh inquiry into the matter. However, he added that since he joined duty during the polls, he did not receive any complaint about Amphan relief funds.

Last year, allegations about irregularities in preparing the list of Amphan compensation beneficiaries had snowballed into a major controversy, big enough for chief minister Mamata Banerjee to step in.

In the face of widespread protests over alleged irregularities in distribution of financial relief to the people affected by Amphan, Mamata had admitted “lapses” and said her government would rectify those.

Sources in the district administration pointed out on Wednesday it was unacceptable that a family (the Paria couple) had not received the compensation in a whole year. “Whatever be the reason, this shouldn’t have happened. It must be rectified immediately,” a district officer said.