Instead of Thakurnagar, the Union home minister will go to West Midnapore on the 1 of his Bengal tour commencing December 19 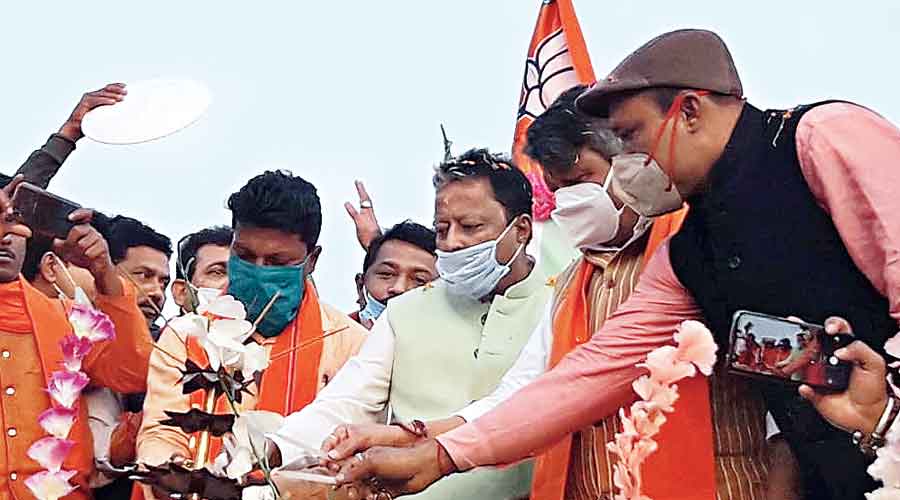 The BJP has said Union home minister Amit Shah’s visit to the Matua stronghold of Thakurnagar during his two-day Bengal tour was cancelled. BJP sources said the cancellation of the visit suggested that the Centre was not yet ready to implement the Citizenship Amendment Act, a major demand of the Matuas.

Instead of Thakurnagar in the Bongaon Lok Sabha constituency, Shah will go to West Midnapore on the Day 1 of his Bengal tour from December 19.

“Amitji is coming (to Bengal) as scheduled but the plan to visit Thakurnagar has been changed. He will visit West Midnapore to take stock of the party’s organisation in the Midnapore zone,” said state BJP vice-president Biswapriyo Roy Chowdhury, who is also the in-charge of the party’s Nabadwip zone, under which the Bongaon parliamentary constituency falls.

“Amitji will visit the Nabadwip zone later,” he added.

Although Roy Chowdhury didn’t elaborate on the replacement of Thakurnagar with East Midnapore, multiple sources in the BJP said the sudden change in Shah’s itinerary was significant.

Several BJP leaders, including state BJP general secretary Sayantan Basu, had earlier said Shah would visit Thakurnagar to address the concerns of the Matuas as discontent was brewing in the community over the delay in the implementation of the CAA.

BJP’s Bengal minder and national general secretary Kailash Vijayvargiya had visited Thakurnagar last week and met local party MP Santanu Thakur to draw up the details of Shah’s programme amid a buzz in the saffron camp that the Union home minister would make some announcements on the implementation of the CAA during his coming tour.

“It seems the Centre is not yet ready to implement the CAA and hence, Amitji is not visiting Thakurnagar,” a source in the BJP said while adding that the plan to drop Thakurnagar from Shah’s itinerary would hurt the party.

“The Matuas are already unhappy with us over the delay in framing of the CAA rules. Sensing an opportunity to woo the Matuas back, Mamata Banerjee had recently visited Bongaon and met representatives of the community,” said a BJP insider.

A section of the Matua Mahasangha has held Santanu Thakur responsible for the change in Shah’s plan. “The MP is not protecting the interests of the community,” said a Matua leader.

Shah’s plan to visit Midnapore has also led to speculation in the BJP about the possible reason. “There is a rumour that some senior Trinamul leaders in the Midnapore region will join the BJP during Amitji’s visit,” a source said.

However, MP and state BJP general secretary Jyotirmoy Singh Mahato, who held a preparatory meeting with party workers at Kharagpore in East Midnapore on Monday over Shah’s visit, rejected all speculations.

“Both Thakurnagar and Midnapore were options in hand and we zeroed in on the latter,” Mahato said. “Amitji will visit freedom fighter Khudiram Bose’s house here (in Midnapore) and will have lunch at a farmer’s house. He will also meet BJP workers on December 19.”

Sources said offices were being set up for each leader in charge of five BJP organisational zones in Bengal.

“These leaders will stay in the respective zones they have been assigned till the Assembly elections are over and hence, they will need work space,” said a BJP leader.

Sunil Bansal, the general secretary (organisation) of Uttar Pradesh, who oversees the Calcutta zone will have his office at the state BJP headquarters at 6 Muralidhar Sen Lane in the city. Pawan Rana, Bhikhubhai Dalsaniya and Ravinder Raju will have their offices in Midnapore, Nabadweep and Burdwan zones, respectively. Ratnakar, the joint general secretary (organisation) of Bihar, will have his office in the north Bengal zone.