Amit Shah is the biggest Pappu this country has seen, says Abhishek 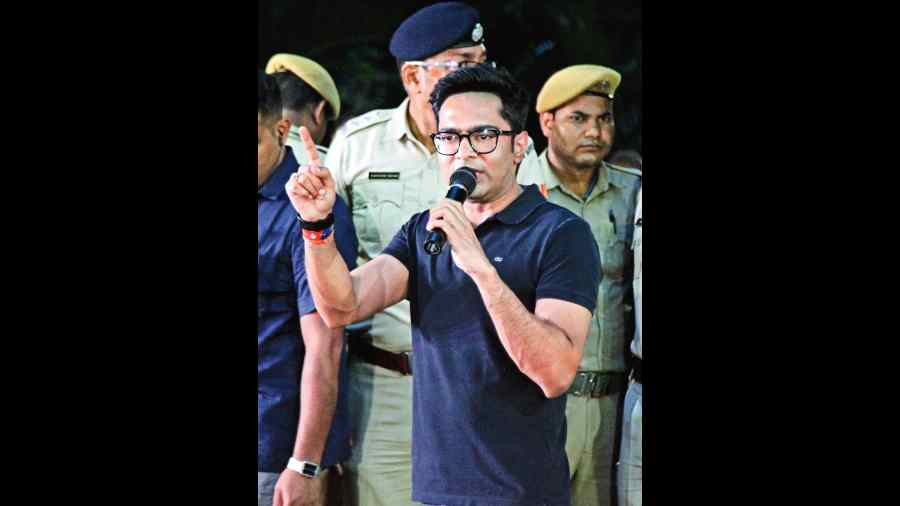 Trinamul MP Abhishek Banerjee emerged from around seven hours of questioning by the Enforcement Directorate (ED) on Friday evening and mounted a scathing offensive on Amit Shah.

Abhishek labelled the alleged cattle-smuggling and coal pilferage “scams” as the “home minister scams”, and called Shah the “biggest Pappu this country has seen”, before daring the central probe agencies to prove he was involved in even six paise of corruption.

The Trinamul Congress national general secretary came out around 5.35pm after the ED interrogation at the CGO Complex of Salt Lake and went all guns blazing during a 42-minute interaction with journalists waiting outside. Earlier in the day, the Supreme Court had prevented coercive measures against him till Monday.

“I will call a thief, a thief. The CISF, the BSF… all report to the Union home ministry. Why aren’t they (those in charge of the ministry) being questioned? This is not a coal scam or a cattle scam; it is the (Union) home minister scam,” Abhishek, Mamata Banerjee’s nephew, said.

Abhishek asked how coal pilferage from mines guarded by the CISF and cattle-smuggling across international borders guarded by the BSF could possibly have taken place without “assistance” from the BJP-led Centre.

“Why isn’t the (Union) home minister being summoned for cattle smuggling? Why aren’t the top officials of the BSF and the CISF not being questioned? If someone steals something from my place, I will contact my security guard, not my neighbour’s guard,” he said.

“They don’t have the guts… they call a leader from another Opposition party (the Congress) ‘Pappu’ (a nickname thrust upon Rahul Gandhi by the saffron camp’s propaganda machinery). But the biggest Pappu this country has seen is Amit Shah,” Abhishek added.

“In states where you don’t have a (BJP-led) government, you will let the CBI, the ED loose on those states’ leaders, try to fell those democratically elected governments by hook or by crook. You do not want there to be a level playing field, you only want to play and score in an unmanned field, in an empty goal. Hence I’m saying that Amit Shah is the biggest Pappu.”

This is the third time the Diamond Harbour MP has faced ED interrogation since last autumn. His wife, Rujira, has been questioned thrice by the ED and the CBI.

“My wife and I have been quizzed for over 60 hours and the net result is zero. I submitted my statements in writing like before…. If, in those 60 hours, they can find evidence of even six paise of corruption, I will gladly walk to the gallows and voluntarily get hanged,” Abhishek said.

“People have seen that whenever I have been summoned, I have gone out of my way to cooperate in the investigation…. I will not blame the officials who have come here to investigate the case. They are only trying to do their job. I will not target those working for the ED and the CBI, but the common people of our country have been witnessing the role of the central agencies,” he added.

“I urge them to live up to the word ‘integrity’ that they wear as a badge of honour, and not succumb to the pressure of the BJP.”

“They have been repeatedly giving out the names of those who would be questioned next…. They are proving that the investigation is happening under the BJP’s instructions,” he said.

“I am not one who will bow before those sitting in their high chairs in Delhi. If they think they can scare me by using the ED and the CBI, because I attacked someone’s son (Shah’s son Jay Shah, the BCCI secretary), they should know that I will be even more critical of them. I will bow my head only to the common people. I don’t know how to compromise my integrity,” he said.

“Why does it hurt them when I call someone ‘anti-national’ based on their actions? You go on forcing patriotism down the nation’s throat, but fail to educate your own son,” Abhishek added, referring to a recent video of the BCCI secretary refusing to hold the national flag after India won a cricket match against Pakistan in Dubai.

Abhishek brought up the BJP-engineered coups in states such as Madhya Pradesh, Karnataka and Maharashtra to fell governments led by non-BJP parties, and accused the ruling party of trying the same in Jharkhand and Bengal.

“They failed in the people’s court, and want backdoor entry to access power…. If they target me, let them target me. I believe that the tree that gives the sweetest fruits is the one shaken the most,” he said.

“Whoever is taking on the BJP’s juggernaut doesn’t just have to fight the BJP. Trinamul is fighting the BJP, the Election Commission of India, central investigative agencies, a section of the media and even a section of the judiciary…. I have the right to question certain judgments. If there is a case of contempt against me, so be it,” Abhishek added.

“We will fight to the finish… to tear down the walls of the propaganda politics of the despotic autocrats in Delhi.”

Arrest me if you can: Abhishek