All need to counter bid to rewrite history: Mamata 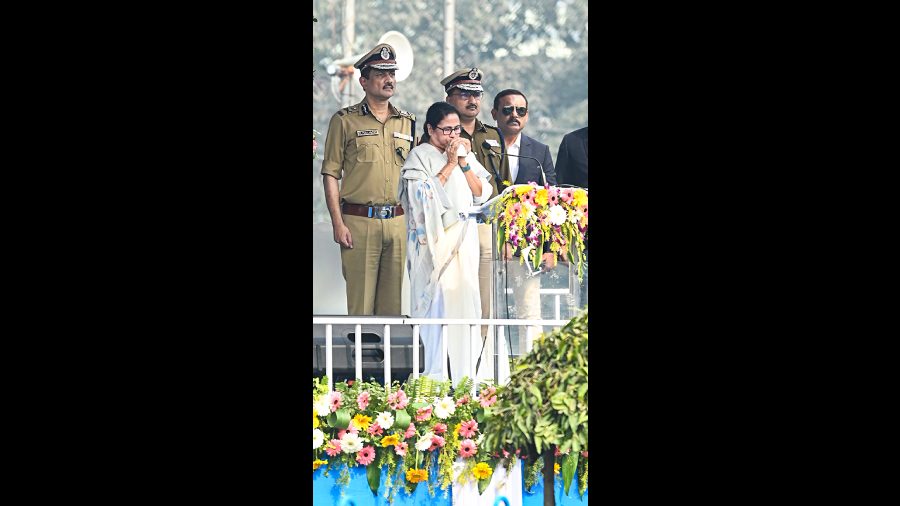 Bengal chief minister Mamata Banerjee on Monday urged people from all spheres to do their bit to ensure that the actual history of the country’s freedom struggle was not distorted.

The plea has come at a time several historians have expressed concerns over the BJP-led right-wing ecosystem’s attempts to rewrite India’s history to suit its political agenda.

“We should not turn up only on Republic Day to become patriotic and commemorate the heroes of our freedom struggle. We must highlight the actual history of India at every event. We should resist all attempts to distort the history of independent  India,” Mamata said while addressing a programme to celebrate the 126th birth anniversary of Netaji Subhas Chandra Bose in Calcutta.

Although this is not the first time that the Trinamul Congress chairperson has become vocal against the saffron camp’s consistent attempt to give a favourable spin to the history of India’s freedom struggle, Mamata sounded really earnest in her appeal on Monday as she gave a call to organise people’s movement to preserve the true history of modern India.

According to her, everyone — including the members of the civil society — should try to ensure that the younger generation gets to know about the patriotic movements held across the country, especially in Bengal. Mamata announced that she would unveil a book on 50 freedom fighters at the Calcutta Book Fair 2023.

“We are answerable to our future generation. They should know about our history. I request people to contribute in their own way to make the future generation aware of the legacy, what our legends left behind for us,” she said.

The chief minister’s emphasis on protecting the actual history of independent India is significant at a time several senior BJP leaders, including Union Home Minister Amit Shah, advocated a need to rewrite the history of the country after accusing the historians of presenting distorted history, biased towards the Mughal empires.

Eminent historians like Romlia Thapar have criticised the BJP’s attempts to create a different historical narrative and expressed concerns over the move aimed at shifting the ideological stand of Indian civilisation from an inclusive and pluralist entity to that of one with a pronounced majoritarian character.

“Netaji Subhas ChandraBose had always respected each and every caste, creed, and religion. He had always spoken about unity, harmony, and traditions,” said the Trinamul Congress chairperson.

Mamata also brought the example of Kazi Nazrul Islam, who had written so many patriotic songs and Shyama Sangits (based on the goddess Kali in Hindu mythology), as she tried to send out a message on the Bengal model of inclusiveness.

“We should not forget the role of Kazi Nazrul Islam who wrote so many Shyama Sangits. He wrote several patriotic songs like Rabindranath Tagore. We should recall them all,” said Mamata who inaugurated an album of a series of patriotic songs, namely Charan Sparshe (touching the feet), at Mondays’ event.

The songs were on several patriots from Bengal and penned by Mamata herself. Pandit Ajoy Chakraborty composed the songs and those were sung by a set of known singers of the state.

After explaining the BJP’s disconnect with Netaji — by explaining how the Narendra Modi regime disbanded the Planning Commission, an idea of the freedom fighter — she went after the central government. Mamata said the Centre was using its agencies against the BJP’s rival parties and had sent 50 teams to states like Bengal to create an atmosphere of fear.

“Unlike others, we do not run away fearing the agencies. Take what you want, but do not sell our nation. Do not attack the unity of India. More than 50 central teams have been sent to Bengal in the past three months. But how many were sent to Uttar Pradesh?” asked the chief minister.

Mamata on Monday said it was not always a demonstration if people went to her to air their grievances.

The comment is significant in the backdrop of ongoing protests against Trinamul leaders, who are visiting villages to connect with people as Didir Doot (Didi’s emissary). The initiative is a part of the ruling party’s mega outreach drive Didir Suraksha Kawach(Didi’s talisman or armour of protection).

“It is not possible everyone will like me. It is not possible I will have no critics. I want people to put air their grievances in front of me. Do not quote it as a demonstration. This is our people bringing things to our notice.”