On November 24, another bear sneaked into a locality in Jalpaiguri and attacked and killed a youth who had ventured too close and was in turn beaten to death 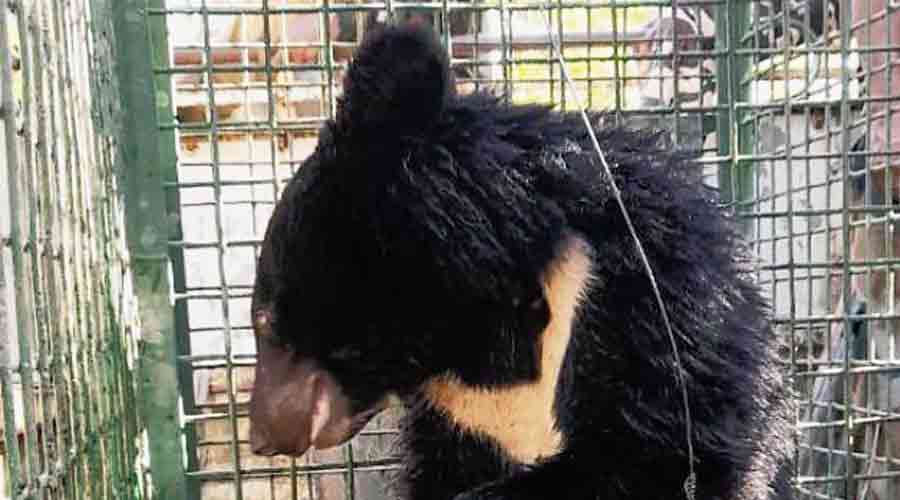 A Himalayan black bear that strayed into a tea estate on the outskirts of Alipurduar town was tranquillised and rescued by foresters on Friday morning.
In the past 10 days, this is the third time that a bear has been sighted in the Dooars.

Sources said early in the morning, the bear was seen near Cheko, a village close to the Majherdabri tea estate. From there, it entered the plantations of the tea estate.
Some tea workers spotted the animal and raised an alert. The garden’s manager informed foresters of nearby Buxa Tiger Reserve (BTR).

Foresters rushed to the spot with vets and tranquillising experts. Two pet elephants were also brought to the site to search the area and rescue the animal.
As the news spread, hundreds started swarming in the area, prompting the SDO of Alipurduar to impose prohibitory orders on the tea estate and adjoining Cheko and Panialguri villages.

On November 24, another bear sneaked into a locality in neighbouring Jalpaiguri district and as people crowded around the animal, it attacked and killed a youth who had ventured too close and was in turn beaten to death.

“We didn’t want to take any risk today (Friday) and hence clamped prohibitory orders to prevent people from crowding near the animal,” said an administrative source.
Around 12.15pm, foresters spotted the bear in the plantations. One of the foresters shot a dart to tranquillise the bear. It was put in a cage and taken away to the BTR area.
“We often see leopards and elephants entering our tea estate near the forest. But this is the first time in recent years that a black bear has been sighted in the garden,” said Chinmoy Dhar, the garden’s manager.

At BTR, the bear was examined by vets and released into the wild after primary treatment, Prabin Kaswan, the deputy field director (west) of BTR, said.