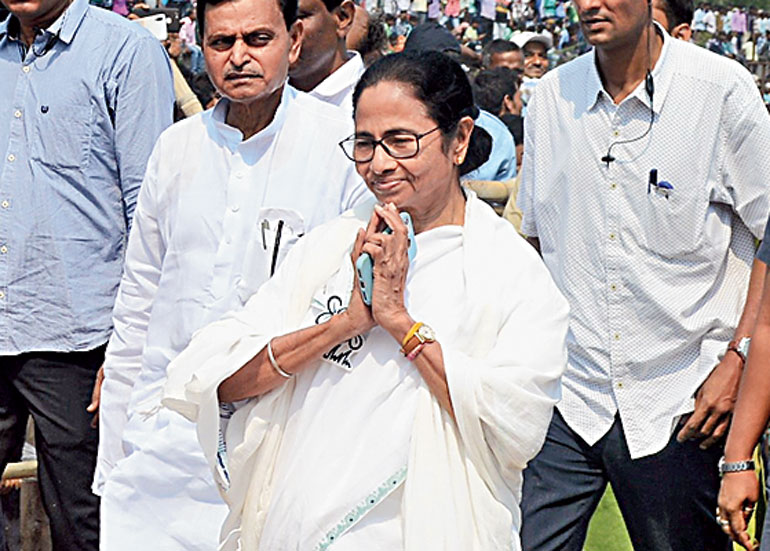 Mamata Banerjee on Monday accused S.S. Ahluwalia, the BJP candidate for the Burdwan-Durgapur Lok Sabha constituency, of hatching a conspiracy to divide Bengal and instigating violence in Darjeeling before escaping from the hills.

Ahluwalia, a Union minister of state, had won from Darjeeling in the 2014 general election with the backing of the Gorkha Janmukti Morcha.

“The BJP candidate has escaped from the Darjeeling hills and come here to seek votes. Do not trust him. He tried to divide Bengal,” Mamata told an election rally at Dewandighi in Burdwan.

The area falls under the Burdwan-Durgapur constituency.

The BJP fielded Raju Bista in the Darjeeling seat which went to the polls in the second phase of the voting on April 18. He was backed by the Binay Tamang faction of the Morcha.

“You know this man had hatched a conspiracy to divide Bengal along with Bimal Gurung. He has escaped from Darjeeling fearing a defeat and is seeking votes here now,” the Trinamul supremo said, referring to the 104-day shutdown called by Gurung-led Morcha in demand of Gorkhaland in the hills in 2017.

The chief minister said Ahluwalia was trying to get sympathy by calling himself a son of the soil in the Burdwan-Durgapur seat after instigating violence in the hills.

At another rally in Kalna’s Purbasthali in the East Burdwan district, Mamata said the RSS and the BJP were playing divisive politics in Bengal in the name of religion.

She also cautioned people and urged them to dump the “dirty politics” of the BJP and the RSS.

“They will offer money to buy your votes. So, you have to be alert. They kill people in the name of religion,” the chief minister, who held three back-to-back rallies in the district on Monday, said.

The Trinamul supremo went to explain how the BJP-RSS combine was trying to instigate violence in the state by holding rallies with swords and mace.

“They are holding processions with swords and mace. What is this? Is it acceptable in a civil society? What are they trying to do with the weapons? They are instigating violence and trying to create religious tensions,” she said.

The Trinamul chief also criticised Prime Minister Narendra Modi on issues like huge spending on publicity, demonetisation drive and claimed that Bengal had done much better on development projects compared to the BJP-led central government.

“Modi babu is saying I have done nothing for you. Now, you tell me whether I have executed schemes like Kanyasree, Sabujsathi, crop insurance, roads and houses for poor. Soon, people will seal his (Modi’s) lips with leucoplast,” said the chief minister.

Aditya Singh, Trinamul youth president of Garulia in North 24-Parganas and son of party MLA from Noapara Sunil Singh, joined the BJP on Monday. Aditya is the nephew of Arjun Singh, the BJP candidate of the Barrackpore Lok Sabha seat.

Arjun had also defected to the BJP from Trinamul. Sunil is also the chairman of Garulia municipality.