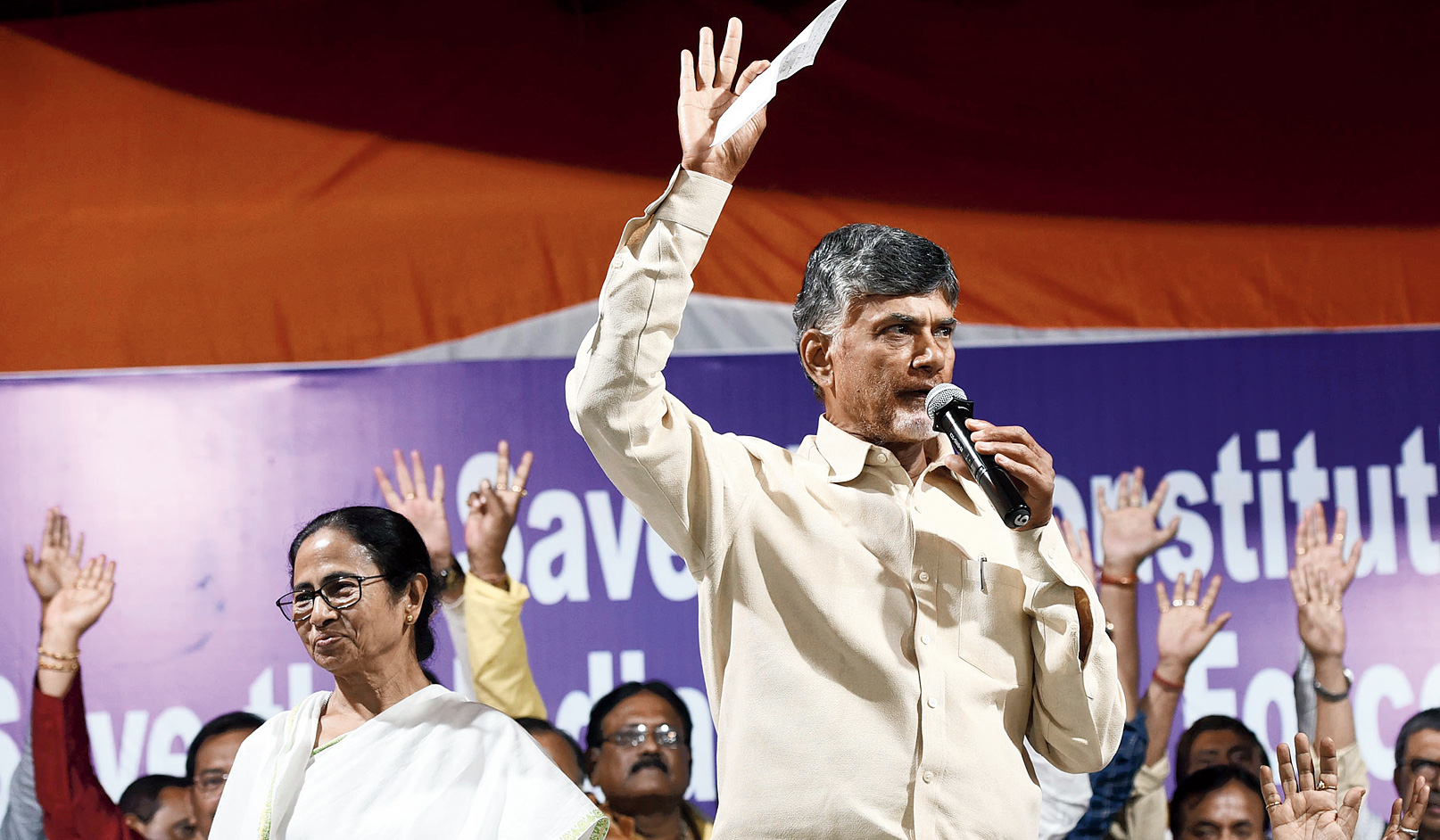 “Moral victory” and a patriotic song on her lips, Mamata Banerjee on Tuesday evening called off her Save India dharna with Andhra Pradesh chief minister N. Chandrababu Naidu by her side, pledging to take her protest to Delhi next week and signalling intent not to allow any let-up in her movement against Narendra Modi.

The 70-hour dharna, which began at Esplanade’s Metro Channel in the heart of Calcutta following a confrontation with the CBI that had sent a team to question city police commissioner Rajeev Kumar on Sunday in connection with the Saradha probe, was lifted hours after the Supreme Court directed the officer to “faithfully cooperate” with the CBI at all times but restrained the agency from taking any “coercive steps, including arrest”.

As Naidu announced from the stage that the Bengal chief minister had accepted a united Opposition’s request to her to call off the dharna, which began at 8.40pm on Sunday, a smiling Mamata thanked the Opposition profusely for backing her movement.

Addressing journalists from the dharna stage, Mamata said around 6.20pm: “The Supreme Court gave a very positive verdict for the people, by the people and of the people…. We discussed this within the national Opposition, Naiduji was here…. We have decided to call off the dharna here today.”

Mamata announced that the “protest will continue in Delhi next week” and that all parties had “united to save India”.

Naidu thanked Mamata for “taking the initiative” of organising the dharna and promised to come “whenever she calls me”.

The Metro Channel dais had become the melting pot of anti-BJP forces and carried on from the January 19 Brigade show of unity organised by Mamata and attended by 23 parties. Mamata and Naidu alleged that the CBI action was the result of the BJP’s envy for the success of the Brigade rally.

During the dharna, Mamata received calls from all prominent Opposition leaders, including Congress president Rahul Gandhi, extending support to her. The RJD’s Tejashwi Yadav and the DMK’s Kanimozhi joined the dharna on Monday.

“On January 19, she got leaders of 23 parties for her United India rally. In the past 70 hours, she got all the Opposition parties by her side,” said senior Trinamul leader and mayor Firhad Hakim while leaving the stage.

Since appearing in public on the dharna dais around 8.45am on Tuesday, tension had been writ large on Mamata’s face. Around 10.30am, she and her party colleagues began making phone calls, apparently to get a pulse of what was transpiring in the Supreme Court, which was hearing the CBI’s appeal.

Celebrations began around 11am following the verdict. While a team led by state security adviser Surajit Kar Purkayastha analysed the verdict, a visibly relieved Mamata walked up to the front of the dais and announced that she would hold a news conference.

Around 11.15am, with a cordless microphone in hand, Mamata hailed the directive and lauded the Supreme Court for upholding her stand. She fielded question after question from journalists, speaking mostly in Hindi and English to reach out to a wider audience. She kept picking representatives of the national media for questions, even asking local journalists to be considerate towards the “guests”.

The tenor of the interaction, during which she often lost her cool but regained composure quickly, made it clear that she was keen to claim victory over the Supreme Court judgment.

Evoking much mirth, Mamata said: “Why is Rajeev Kumar such a terrible nightmare for the BJP? I suggest they make him their prime ministerial candidate.”

Through the dharna, she had tried her best to send out the message that her protest was not political. In a bid to reassert the stand, she gestured to people in the crowd to take down Trinamul flags every time one was brandished.

Like the January 19 rally at Brigade, Mamata often took the back seat and allowed leaders of other parties, like Kanimozhi and Tejashwi, to do the talking. Even the decision to call off the dharna was communicated by Naidu, which was planned to send out the message that the protest did not belong to Mamata or her party alone.

“That’s the biggest success of this dharna. We started it, but then all other Opposition parties joined it…. That’s a big success and Didi has all the reasons to be happy,” said a Trinamul insider.