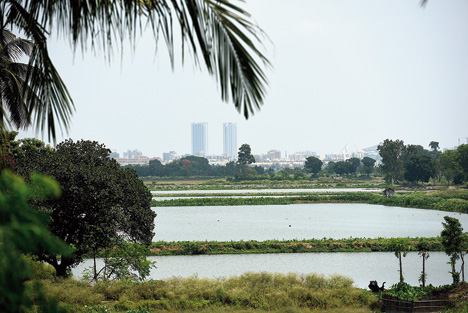 Calcutta: The East Calcutta Wetlands is already under threat and building a flyover or a road through them will only worsen matters, environmentalists have said.

The Ramsar Convention listed the wetlands as threatened in August 2010 following reports of urban encroachment and "noxious pollutant escalation", Yaiphaba M. Akoijam, assistant adviser for Asia-Oceania at Ramsar secretariat, said in an email to Metro.

The Bengal government has planned to build a flyover and widen a road through the core of the ecologically fragile wetlands.

The Calcutta Metropolitan Development Authority has chosen a firm to assess the environmental impact for both projects - a road meant to connect Sector V with Bantala on the Basanti Highway and a flyover between Metropolitan on the Bypass and New Town.

The Ramsar Convention on Wetlands is the intergovernmental treaty that provides the framework for the conservation and wise use of wetlands and their resources.

The Convention was adopted in the Iranian city of Ramsar in 1971 and came into force in 1975.

The government hasn't done any study till now to check if the wetlands' area has shrunk from the original, Bonani Kakkar, a co-founder of PUBLIC (People United for Better Living in Calcutta), said.

The NGO has been fighting for the protection of the wetlands for several years.

"Since the wetlands were listed as a Ramsar site (in 2002), the government never demarcated the area. The demarcation would have made it difficult to encroach on the wetlands," Kakkar said.

The 12,500 hectare that is always cited was the size of the wetlands when they were declared a Ramsar site in 2002.

"If a flyover comes up, the piers will be built either on the water bodies or on the land that comprises the wetlands," an environmentalist said.

"It will lead to environmental degradation. When vehicles start moving through the flyover and the road, it will only add to the pollution."

The wetlands is of "immense importance" to the city's existence, a civic engineer said. More than half of Calcutta's waste water is drained into the East Calcutta Wetlands without any requirement to treat the sewage.

The wetlands has saved the government crores as the waste water doesn't need any treatment, a civic official said.

"We had to build sewage treatment plants at Taratala, Behala, Lake Town and Garia to drain waste water out of these places," a civic engineer said. "Since the waste water from these places don't drain into the wetlands, it has to be treated to reduce the pollution level before being discharged into canals."

Each of the plants were built at Rs 40 crore at least, the engineer said.

Waste water passes through gates at the wetlands into the fisheries. "Once they are filled, the gates are closed and the waste water travels 28km to the Bidyadhari river. During the journey the water gets naturally treated and becomes fit to fall into the river," the engineer said. Tampering with the wetlands would mean the city losing its natural waste water tank, he said.