Advertisement
Home / West-bengal / A vote to restore idea of India

A vote to restore idea of India

Motion: In the opinion of the house, the idea of India needs to be restored 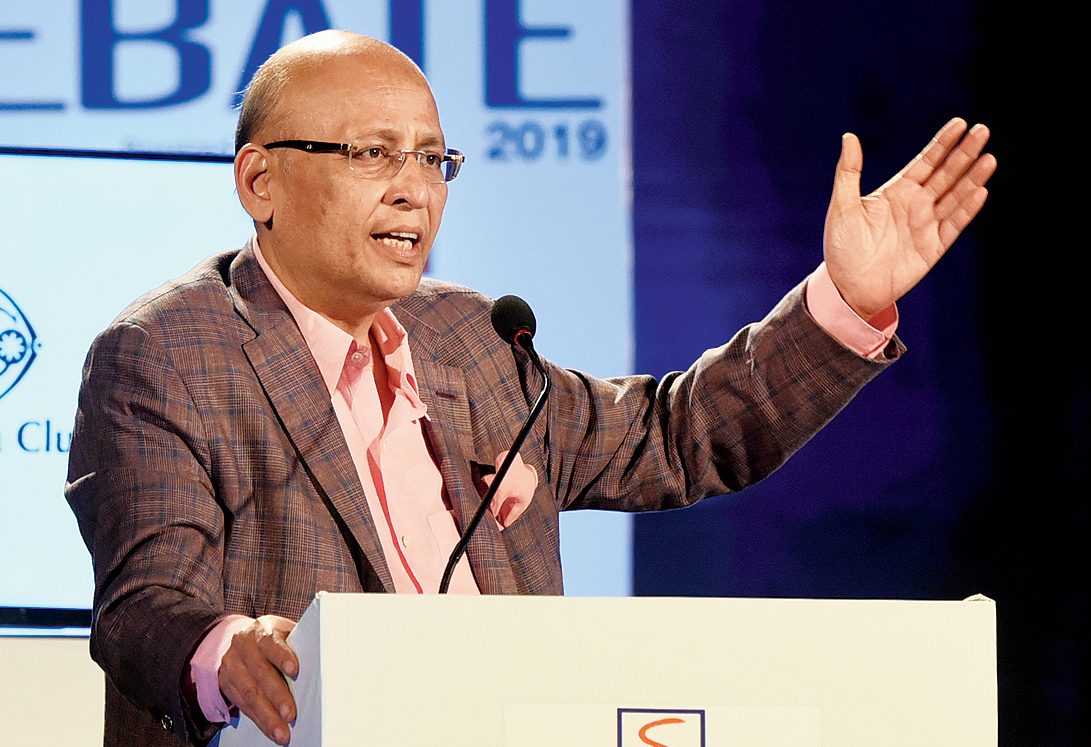 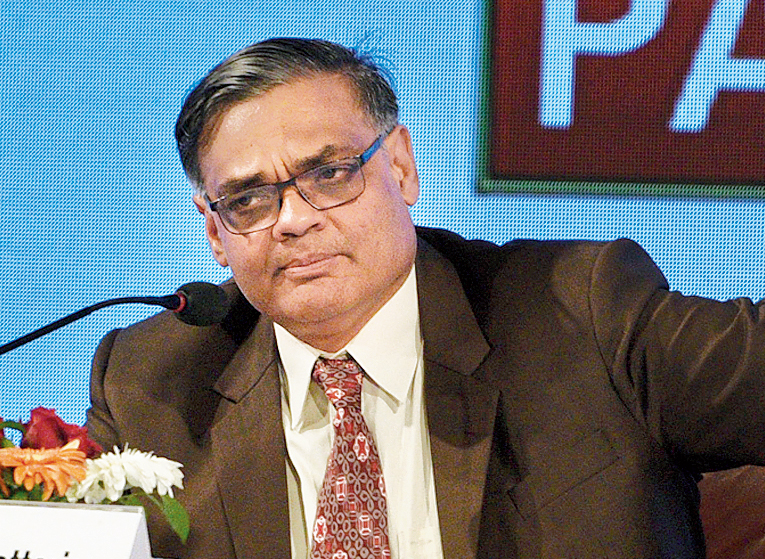 Verdict: The motion was carried

India is far too deep, far too rooted, far too diverse, far too argumentative to be redefined.

There is a word in our Constitution's preamble — fraternity. A much-ignored word. That is the idea of India. Fraternity conveys in its essence trust, it conveys reassurance, it conveys security and, in its antithesis, it conveys the three Ds — divisiveness, distrust and disharmony. We, India, are planet earth’s most diverse spot.

Of the 30-40 countries that emerged from the yoke of imperialism between the 1930s and 1960s, why is it that India alone is a shinning exception amidst the wrecks and ruins of constitutionalism, which litter the landscape in south Asia, in Africa, in South America? In large swathes of the world, we are the only one that remained a democracy. That is because we have the idea of India largely right, at least thus far. We have remarkable institutional and even more remarkable non-institutional pillars of Indian democracy, which form the core of that idea.

We have reduced ourselves to the dictatorship of one-and-a-half persons.

Never before in 70 years have large sections of the press been compromised, weakened, co-opted, threatened…. The Emergency was the crude, formal, overt action and, therefore, much more accountable. You today have a much more insidious attempt. Judiciary: a clear message is being sent. If you are not with us, we will treat you as against us. If you chant Tussi Great Ho, everything is hunky-dory; if you forget, every agency of the world will be unleashed on you. 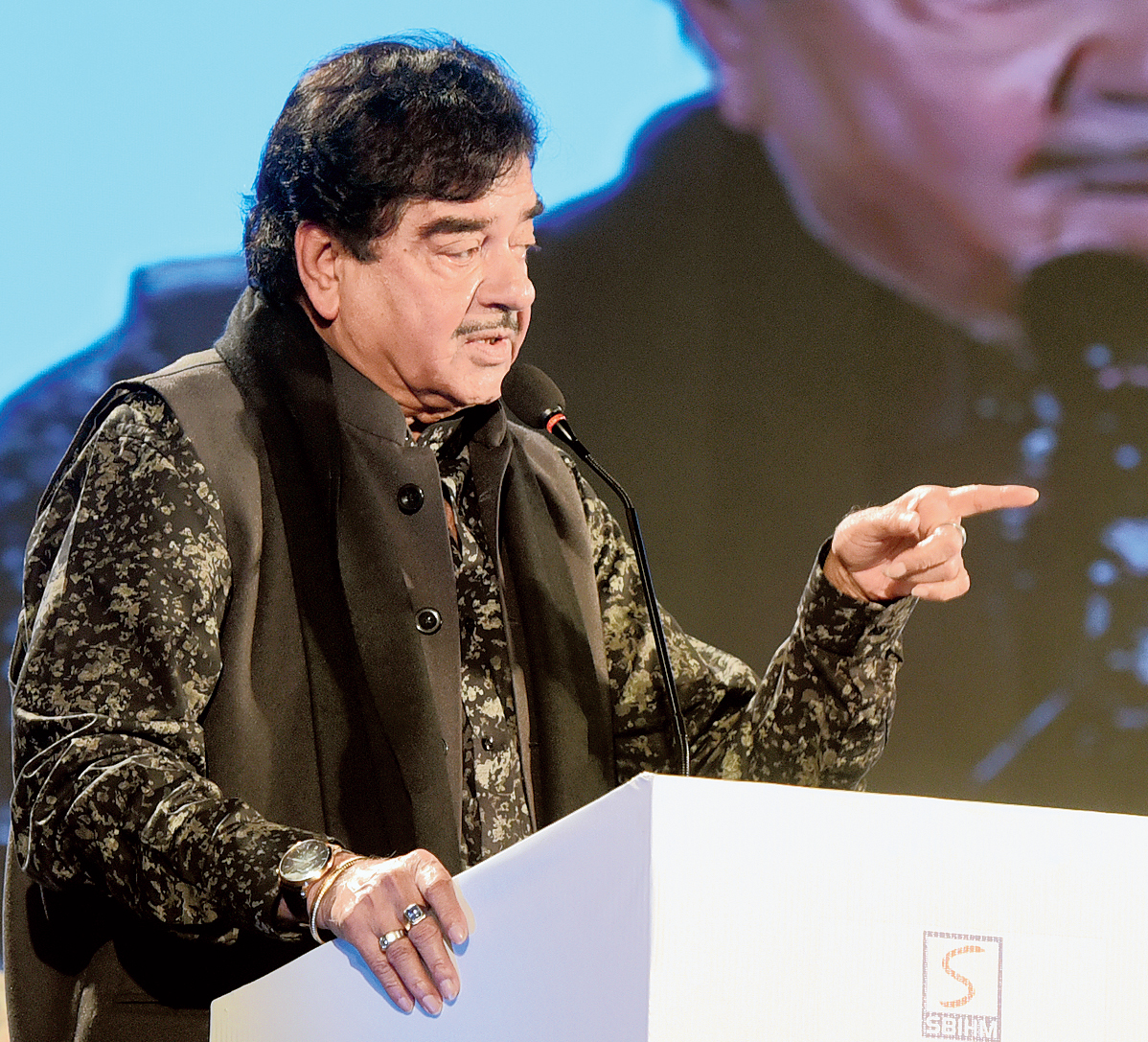 For the motion Shatrughan Sinha 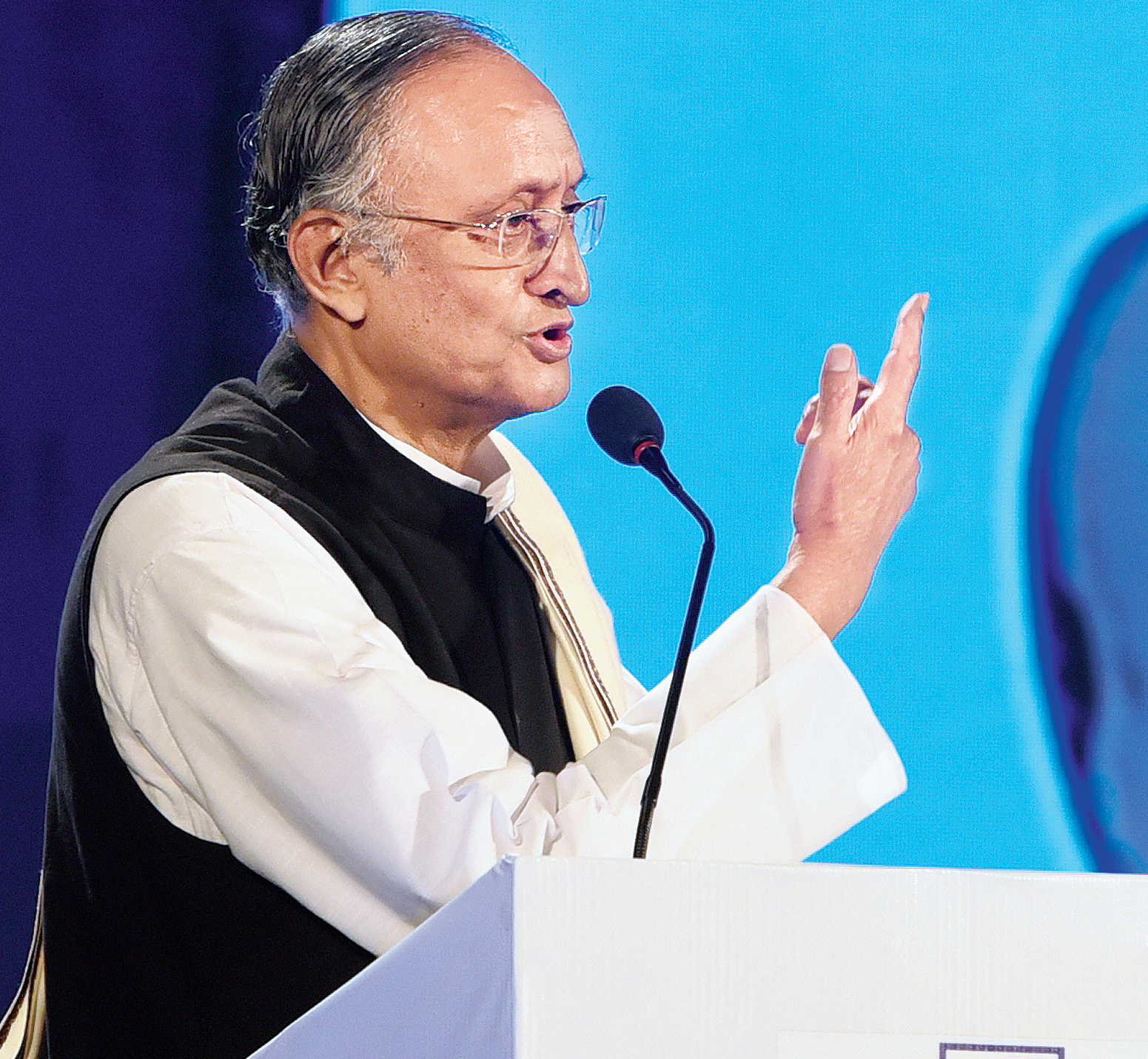 For the motion Amit Mitra

As an attitude of gratitude, I salute the honourable Prime Minister of India and, of course, the iron lady, the true mass leader, the magician and Bengal tigress, Mamata Banerjee.

Somebody asked me what difference do I find between Vajpayee’s time and today’s. Back then, it was lokshahi (democracy); today, it is tanashahi (autocracy). There is an environment of fear. We have to restore the India that had harmony. A one-man show and two-men army, this is not going to work…. You are being repeatedly asked to speak up on Rafale. If you say something once, the chhappan-inch chhati will not become chhai inch. It is when you don’t speak at all that you give people the chance to think and chant: Chowkidar (pause)… I won’t say the remaining bit.

The time-keeper rings the bell and Sinha half-turns and says “Khamosh!” to finish his argument.

I am amazed by what

Ramakrishna Paramahansa had said. Where is jato mat, tato path? Where did the message of ‘many ways fall into the sea’ go? I see on television lynching of the minority person. I see and I shudder. I remember graphically four young people from the Scheduled Castes being beaten with a rod…because they were carrying something that they did not approve of. There was beating, beating, beating. That’s not what Vivekananda had said.

Demonetisation. Do you know that the cabinet of India did not know? Even the finance minister, I doubt. This is democracy.

Fifteen lakhs would be put into all your accounts. Have you got it? When you are asked later, I am told it is jumla. The governor of the RBI resigns. The CBI is pushed around.

Kazi Nazrul Islam wrote, “I sing the song of equality, where all differences have resolved. Where Hindu, Bouddha, Muslim, Christian have all converged.” He’s a Muslim. He was a Shyama-sangeet specialist but doing namaz. That is Bengal. That is the idea of India we are debating.

What did Netaji Subhas Chandra Bose do? In Red Fort, we had (Gurbaksh Singh) Dhillon, (Prem Kumar) Sahgal, Shah Nawaz (Khan). My mother cut her own finger and received Shah Nawaz Khan on behalf of the Bose family. And I was told, he is your Mamajaan. That is the idea of India.

For: The audience at Calcutta Club gave a decisive verdict in favour of the motion on Sunday. Put to vote by moderator Sandip Chatterjee, the hands raised (below) for the proposition clearly outnumbered those raised for the opposition.

The idea of India is strong and resilient and there is no need for any restoration. Look back into history.

The idea of India is the idea of Indian civilisation and culture though the millennia, of a land from Persia to Myanmar, from the Himalayas to the Indian Ocean, united by our culture, by great saints, by Adi Shankara, by Lord Buddha, and our great epics Ramayana or Mahabharata.

People of all faiths have lived here, this country has welcomed them and continues to welcome everybody.

The idea of India is the idea that any individual not born to privilege can through sheer hard work aspire to be the Prime Minister… of this country.

Your own state has an extraordinary individual, who through sheer courage, sheer perseverance and through sheer right to stand up against tyranny rose to be your chief minister. 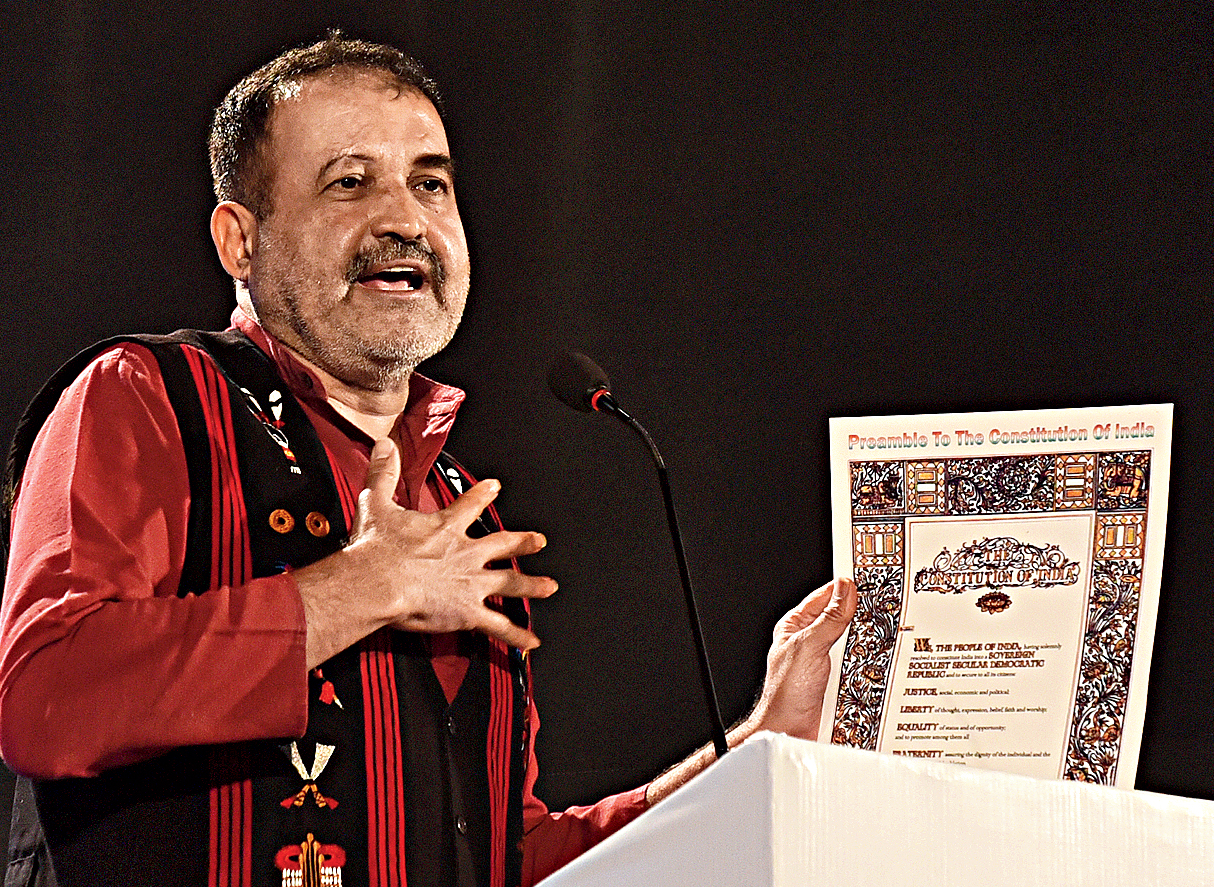 Against the motion T.V. Mohandas Pai 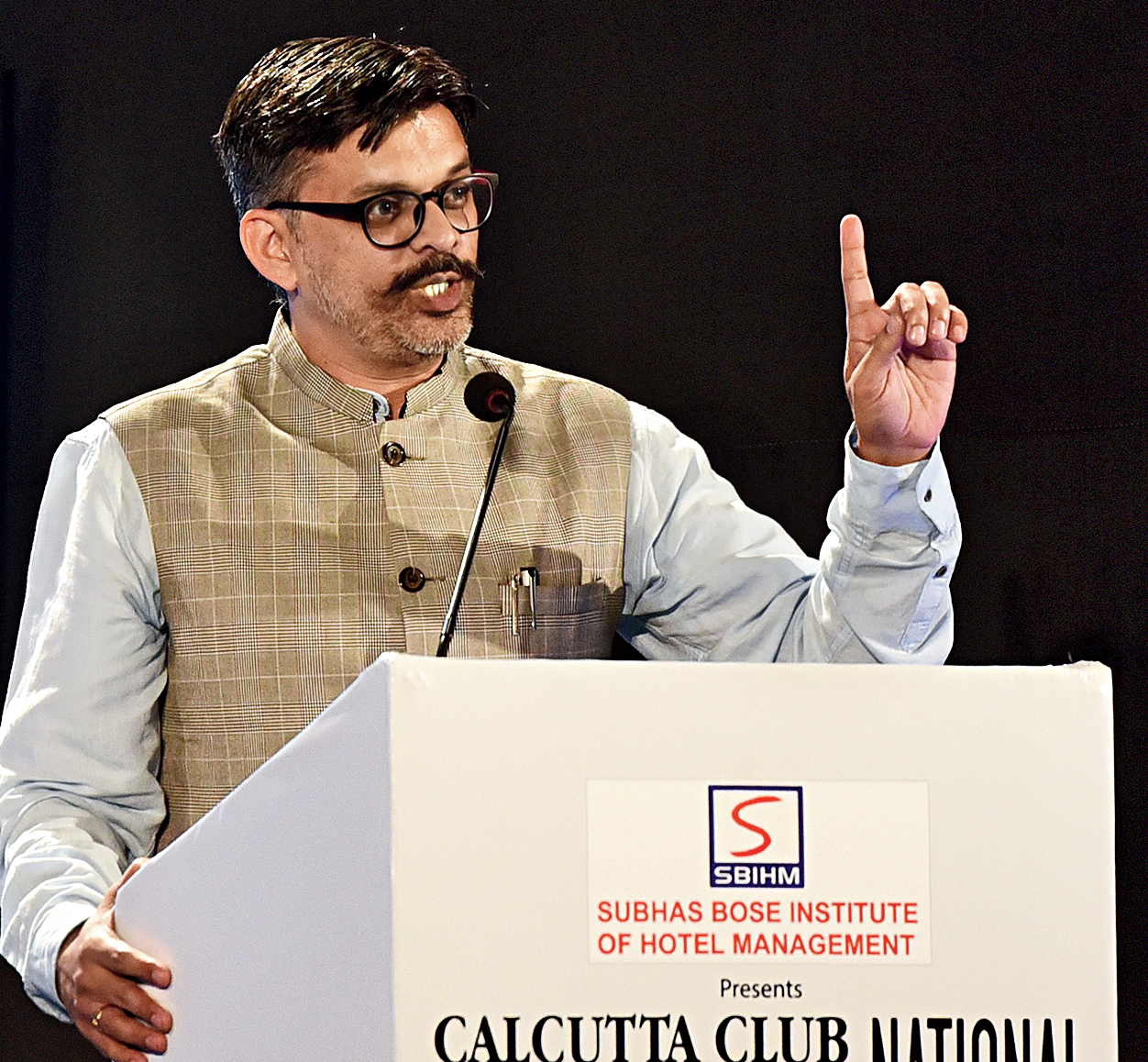 Against the motion Prafulla Ketkar 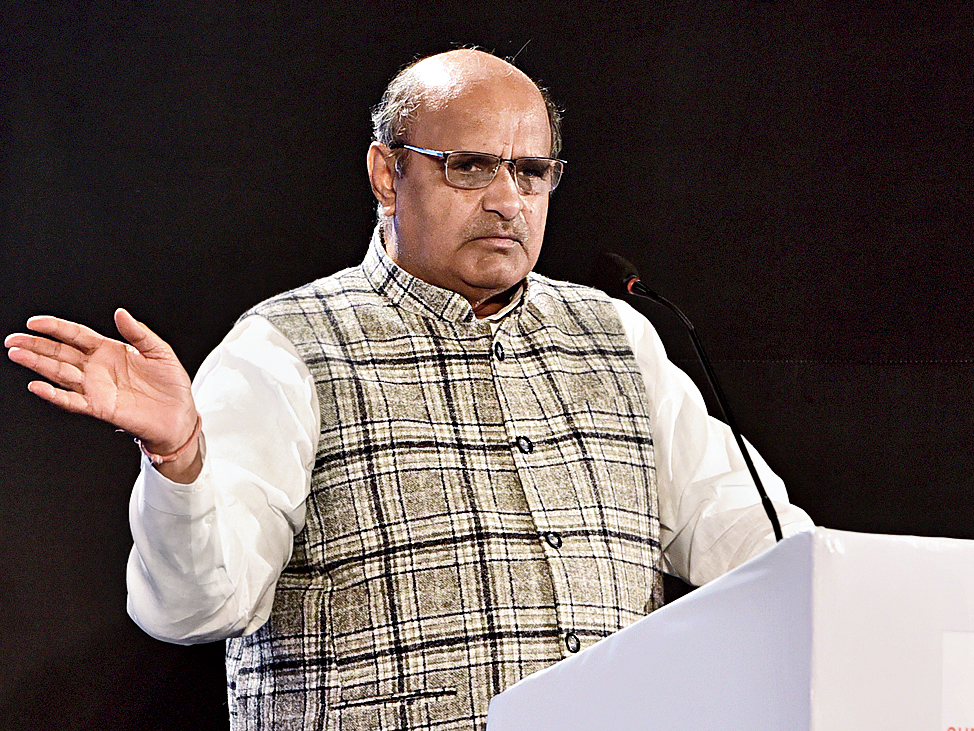 Against the motion K.C. Tyagi
Pictures by Gautam Bose and Pradip Sanyal

Editor of the Organiser, the RSS mouthpiece

India is not an idea. India is a living reality for thousands of years. If anything has to be restored, it is the spirit of Bharat. If at all something happens whenever the BJP is in power, the fake narrative factory builds up. Another fake narrative is the Nehruvian idea of India. If Europe has given political democracy, America has given economic democracy, this is the land that has given spiritual democracy. I don’t want to be tolerant.

Tolerant is not the Indian way. That’s why Swami Vivekananda goes to Chicago and says, I represent the civilisation that goes beyond tolerance.

We don’t tolerate each other. Every new path that came in India, we adopted and accepted and respected to be true…. Problem is you know Akhlaq, you don’t know Ramalingam. This selectivism is building fake narratives of vested interests. One such fake narrative is that the idea of India needs to be restored. Sorry, the spirit of Bharat needs to be restored and that Bharat lives in our Hinduness, rashtra. The Constitution is the outcome of that civilisation, rashtra. I request you to come out of that prism given by (Thomas Babington) Macaulay, (John Stuart) Mill and (Karl) Marx and come up with the real prism of Bharat.

Where do I start from, Singhviji? You have made me take notes on a range of issues — justice, liberty, equality, fraternity. So, I am starting from Jammu and Kashmir. Whatever is plaguing Kashmir today is the contribution of the Congress. Be it insurgency or cross-border terrorism. My leader was Jayaprakash Narayan. He had gone to speak to the Nagas, (Angami Zapu) Phizo, Laldenga (Mizo leader). He was sent back from there because the Congress never believed in dialogue. In Bhagalpur in 1988, 2,000 people were massacred. This massacre had taken place under the nose of the secular government. Emergency. My leader George Fernandes was arrested from a church in Calcutta where he was hiding as a priest. We got to know that George would be arrested and killed in an encounter. So, there was democracy in those days. Federalism. The less said about it the better. Seventy times President’s rule has been imposed against the non-Congress regimes. The killing of Akhlaque was wrong. We oppose whatever few lumpens are doing in the name of cow slaughter. But whatever bad has happened to India started from your time.

Committee members of Calcutta Club with the participants in the Subhas Bose Institute of Hotel Management presents Calcutta Club The Telegraph National Debate 2019, powered by Pan Bahar, on Sunday. “A packed ground on a Sunday evening where there is no food, drink or any singing and dancing speaks volumes about the programme. The crowd stayed till the very end,” said club president Indrajit Roy.
Picture by Pradip Sanyal 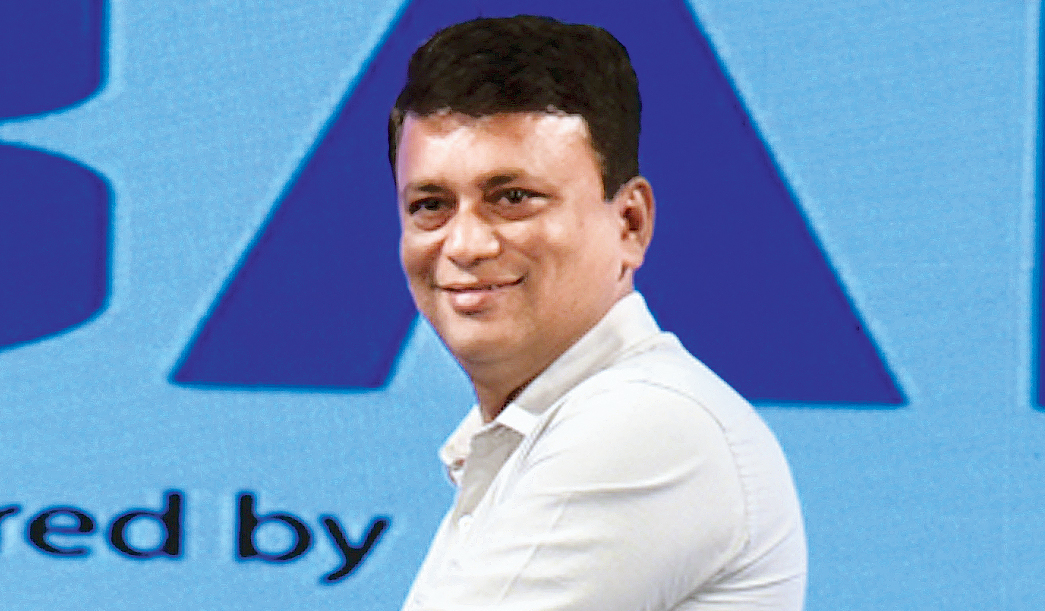 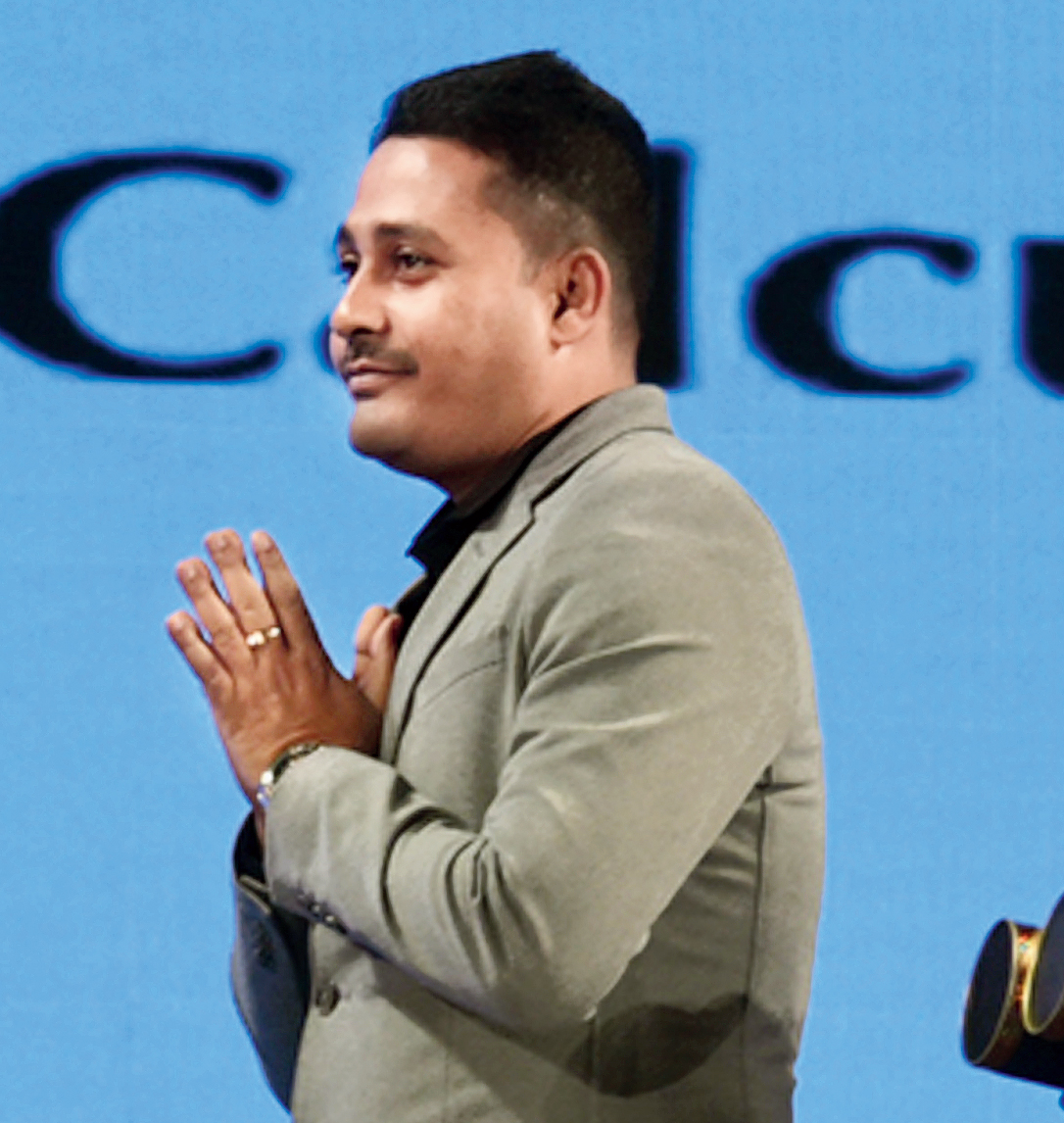