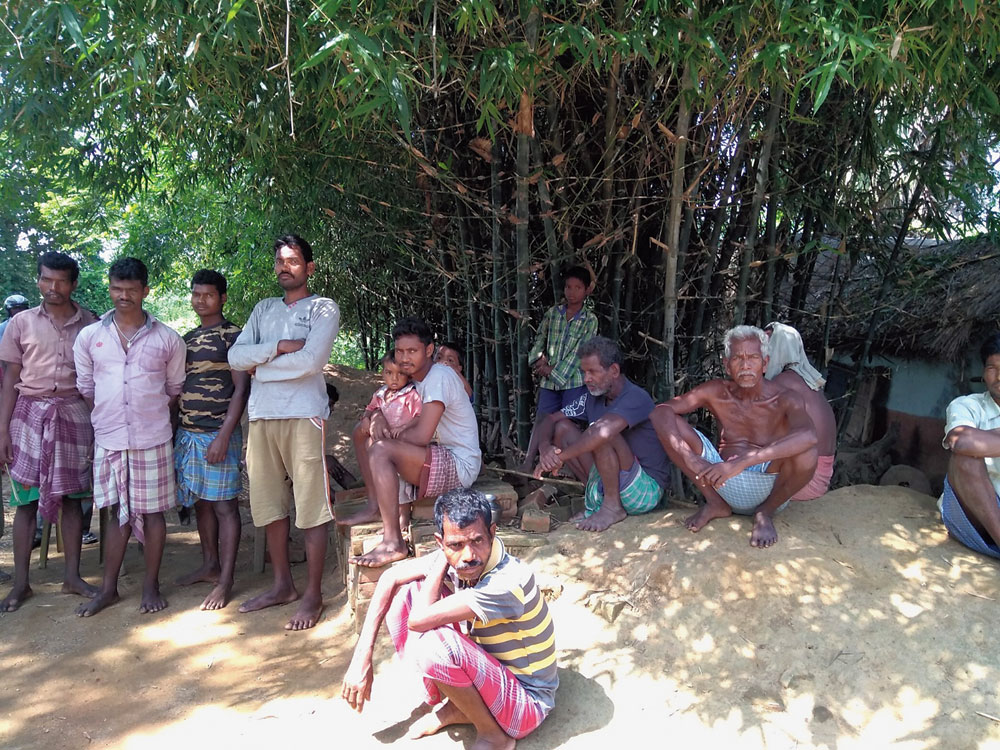 The mound on which the majhi haram (the village head) used to sit at Chatormath in Birbhum. The decision to do away with the majhi haram (popularly called morol) was taken at a meeting held at this spot.
Picture by Dwijodas Ghosh
Snehamoy Chakraborty   |   Suri   |   Published 09.12.18, 10:33 PM

The tribal people of a Birbhum village held an emergency meeting on November 4 and took an extraordinary decision that rang the curtain down on a centuries-old institution.

They elected to do without the majhi haram — the village head, colloquially referred to as the morol — who used to resolve their social problems such as family feuds and land disputes.

The decision by Chatormath, a hamlet of 800-odd tribal people about 15km from district headquarters Suri, has surprised social scientists.

“It’s a significant and uncommon decision that will change the way the tribal people have lived for centuries. The traditional ‘court’, headed by the morol, maintained social stability,” Manas Ray, an anthropology professor at Visva-Bharati, said.

But tribal community leaders elsewhere in Birbhum say they saw it coming and expect more villages to follow Chatormath’s example. They say political parties have invaded and divided tribal society, prompting efforts to put up rival morols — itself a breach of tradition — vitiating the institution and lowering its stature.

Every tribal village in Birbhum has a majhi haram — traditionally its oldest male if he is willing to take on the mantle. Usually he is appointed for his lifetime but tradition allows a morol, if found incapable, to be replaced by a majority decision.

Political rivalry had led to Chatormath witnessing a change of morol last year, and when efforts began recently to force another change, the villagers decided they had had enough.

“Our village is over 500 years old. It had never before in my lifetime been without a head,” said Mangal Tudu, an elderly resident of Chatormath.

“But we are better off without one, because the majhi harams themselves nowadays tend to give in to their political biases, which ends up further dividing the villagers.”

While it remains unclear how the residents of Chatormath will now sort out their social and family disputes, several community leaders in the district told The Telegraph that other villages might follow suit. Political rivalry has landed several of these hamlets with multiple morols.

“These days most people lack respect for the morol system. If a morol gives them a verdict they don’t agree with, they go to the other one…. So, this system is not sustainable any more,” Lalu Soren, a young tribal resident of Joypur, 3km from Chatormath, said.

In Joypur, a newly elected majhi haram is having to work with the previous incumbent, who has refused to step down. Some Trinamul supporters alleged that the old morol was a CPM loyalist and declared they would not obey his verdicts.

Birbhum’s tribal stronghold is spread across nine blocks, which include Mohammedbazar, Rajnagar, Dubrajpur and Rampurhat I and have a combined population of 2.5 lakh. Trinamul and the BJP have been trying to increase their influence in this belt by reaching out to the morols, who are the opinion makers.

“The tribal communities generally voted en bloc. But with all the major political parties focusing their interest on these villages, the local command structure is undergoing a change,” a social scientist said, declining to be named.

In Chatormath, 68-year-old Sukal Kisku was majhi haram for 15 years before being removed a year ago and replaced with Jagannath Murmu, a known Trinamul activist.

But after the BJP emerged as the main Opposition here by virtue of its performance in the recent panchayat polls, its workers began targeting Jagannath. Exasperated at what they saw as a defilement of their traditional system, the older tribal members decided to junk the institution.

Chandi Soren, a village elder from Nirbhaypur in Birbhum, said: “This political problem is a widespread one. Fortunately, it has not affected our village yet.”

Sunil Soren, convener of the Birbhum Adivasi Gaonta, an apolitical tribal organisation, said he knew about Chatormath’s decision but claimed “the situation is actually worse in many other villages”.

“The poor literacy rate and the poor reach of government benefits are among the reasons behind the politicisation of tribal society.”

At Labhpur in 2014, morol Balai Maddi allegedly ordered the gang rape of a 20-year-old woman whom local people had accused of having an affair with a young man from a different community.

In October this year, a 72-year-old labourer at Parui village had all his ten fingers chopped off at the orders of a kangaroo court after having been accused of witchcraft.

“In the past, the village heads would hardly ever issue such brutal verdicts. But things started getting ugly once politics entered the picture,” Sunil Soren said.