Advertisement
Home / West-bengal / A rebel with a cause

A rebel with a cause

At 82, Kedarnath Mondal is known as a rebel in his adopted home in Kadirpur village, near Malda town. And his rebellion continues to be about water 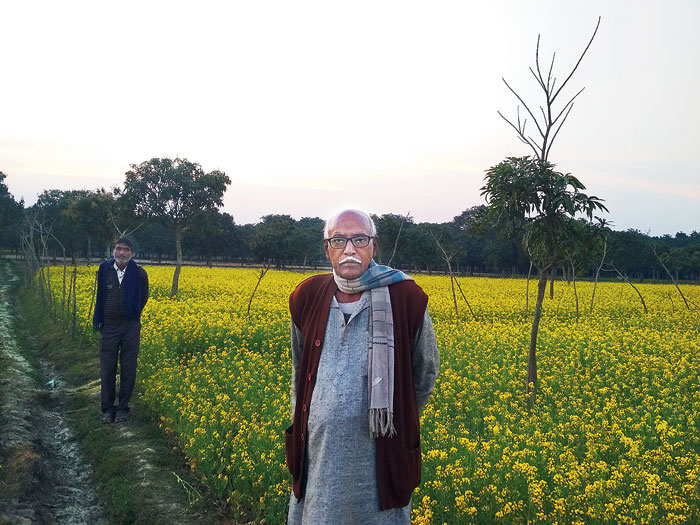 In the 1950s, when Kedarnath Mondal was a student of Class V, a sadhu visited his parents’ house in Malda district, the gateway to north Bengal. Those days it was an accepted thing to wash the feet of a revered guest and drink the water. But the young boy refused to obey the bidding of his elders. He wanted to know what the point of such a gesture was.

Born rebels rarely change their spots. At 82, Mondal is known as a rebel in his adopted home in Kadirpur village, near Malda town. And his rebellion continues to be about water.

It all started in 1998. Those days Mondal was an active member of the CPI(M). He lived on one of the chars (riverine islands formed due to siltation) on the Ganges; river erosion was a serious problem. When Mondal and his neighbours lost their homes to the river, the ruling Left party did little to help them. Says Mondal, “According to Article 11 of the Land Reforms Act, a piece of land remains the property of its legal owner even if it goes under water. The government can claim it for its own only if it has been under water for more than 20 years, but not before that. And yet, way before the mandatory two decades were up, the state government invoked another article [Article 12] and snatched our land.”

Mondal went to the then land reforms minister, Abdur Razzak Molla. Nothing happened. He was asked to contact the local CPI(M) leaders, which he did. Nothing happened. Next, Mondal quit the party and organised a protest rally in Malda town.

The Left party countered this movement, but by then Mondal had convinced the aggrieved people and won their support. Soon after, two Muslim youths came to him and insisted they formalise the movement and constitute a committee. Gradually, it gained momentum. Pamphlets were distributed, awareness programmes were organised, the committee appealed to the high court. They even went to the Supreme Court. But nothing came of anything; the crusade was sacrificed at the altar of politics and eventually the committee too disintegrated.

In 1961, when Jawaharlal Nehru was the Prime Minister and the Farakka dam was planned, Mondal was a feisty 18. The Farakka dam-cum-bridge is built across the Ganges; it connects Murshidabad and Malda. Mondal remembers seeing it come up. Once he and his friend tried to enter the cordoned site but were stopped. Instead, they were left holding a handbill. Today, so many years later, Mondal wonders at the four-point agenda foregrounded by the government in that handbill. The four points were navigability, hydro-electricity, bumper harvest and connectivity between north and south Bengal.

Says Mondal, “Of all these reasons the only one that endures is the point about connectivity. Navigability has not increased. A thermal power station had been established at Farakka in place of the hydro-electric power station. Bumper harvest was never possible because of the nature of the water.”

The part of the Ganges that flows through Malda, Mondal knows it like the back of his hand. He knows it from inhabiting this geography. He knows it because he has educated himself on the issue for the crusade for it. In fact, he understands the river so well that teachers, scholars and journalists come to him all the time to understand the erosion of the Ganges near Farakka. He has even drawn a map of the whole area that visually anticipates the shift of the Ganges in the future. He has marked a portion of the map, a five-kilometre stretch, with a red line. It represents the stretch where the river is at its most vulnerable.

Every year Mondal travels along that route. He studies how the erosion is developing, the speed of it, the depth of the river and so on and so forth.

And what does he think is the future of the Farakka dam? Mondal smiles and says, “Have you been to Nalanda or Gour? Those are archaeological and tourist spots now. Farakka’s fate will be similar. People will most likely see a deserted, ruined construction standing on dry land [a reference to the shifting waters of the Ganges, which are expected to bypass the dam and take a different path].”

Post the demise of the committee and the movement, Mondal has now taken on the role of the ambassador of the Ganges. His time is spent engaging with those who care for the river and the environment and he is happy to share his knowledge with them. People keep flocking to him just to pore over his map.

There is no dearth of causes waiting to be fostered by Mondal. One such is the fight of the Chain sub-caste to be included in the list of Scheduled Castes. Though Mondal has lent his name to the cause for years now and secured recognition for this caste group, his struggle to get them their rightful dues and privileges continues. Not long ago he rallied and built a crematorium in Kadirpur village.

The fights change but the fighting spirit endures. Once a fighter, always a fighter.

Scorched earth, gasping: Not a drop to drink