On Wednesday night, when it was raining heavily, a leopard sneaked into cattle shed Oraon and locked the door from outside and informed his neighbours 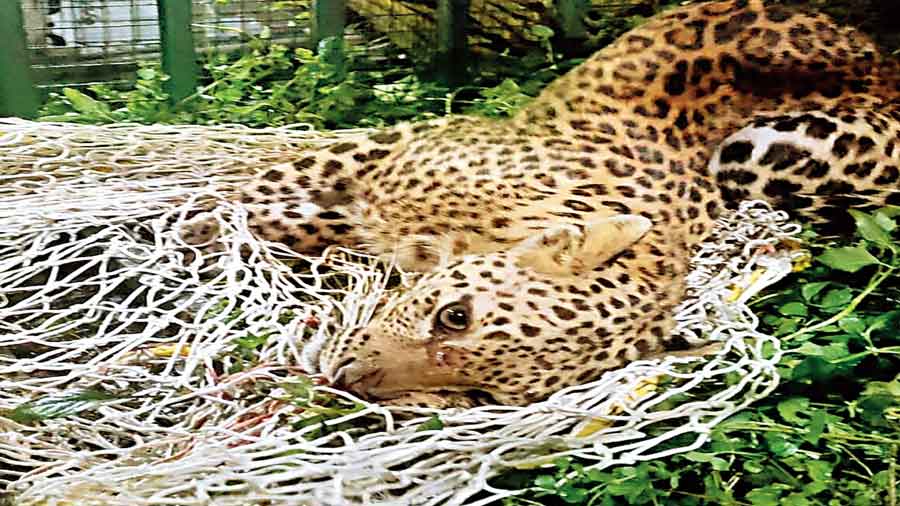 The leopard that was trapped at Kalua Colony in Jalpaiguri district on Wednesday night.
Biplab Basak
Our Correspondent   |   Jalpaiguri   |   Published 19.08.22, 02:22 AM

A 60-year-old man dwelling in the Banarhat block of Jalpaiguri district managed to trap a leopard on his own on Wednesday night.

His feat has drawn appreciation from his neighbours and forest officers. On Thursday, foresters rescued the animal from his home and took it away to Gorumara National Park.Sources said a few days back, a leopard had sneaked into Kalua Colony of Gayerkata, and had taken away a goat of Shyam Oraon.

“I was apprehensive that the leopard might visit my place again in search of prey. Accordingly, I used a net to make a trap and kept it in my room,” Oraon said.

On Wednesday night, when it was raining heavily, a leopard sneaked into Oraon’s cattle shed. “Suddenly I heard the goats bleating. I went out and found the leopard nearby. As I tried to shoo it away, it entered my room and walked into the trap,” said Oraon.

He then locked the door from outside and informed his neighbours. They in turn passed the information to the wildlife squad stationed in Binnaguri. Soon, a team of foresters reached the spot. They asked for the tranquilising team as the animal was trying to free itself from the trap.Eventually, around 9am on Thursday, the leopard was darted.

Forest officials then freed the unconscious animal, loaded it in a cage and took it away.

“The leopard will be taken to the nature interpretation centre at Gorumara National Park. We will keep it under observation and then release it in the wild,” said a forest official.

The carcass of an adult female leopard was recovered from the Manabari tea estate in Malbazar block of Jalpaiguri on Thursday.Sources said a group of workers were busy plucking tea leaves when they smelt a stench emanating from the plantation.

Soon, they found the carcass of the leopard and informed the garden manager. After some time, a team from the wildlife squad of Malbazar went to the spot and took it away.“It seems the animal died three-four days back. We are waiting for the post-mortem report to know the cause of its death,” said a forest officer.