We are not going anywhere unless the black law is repealed: Bilkis 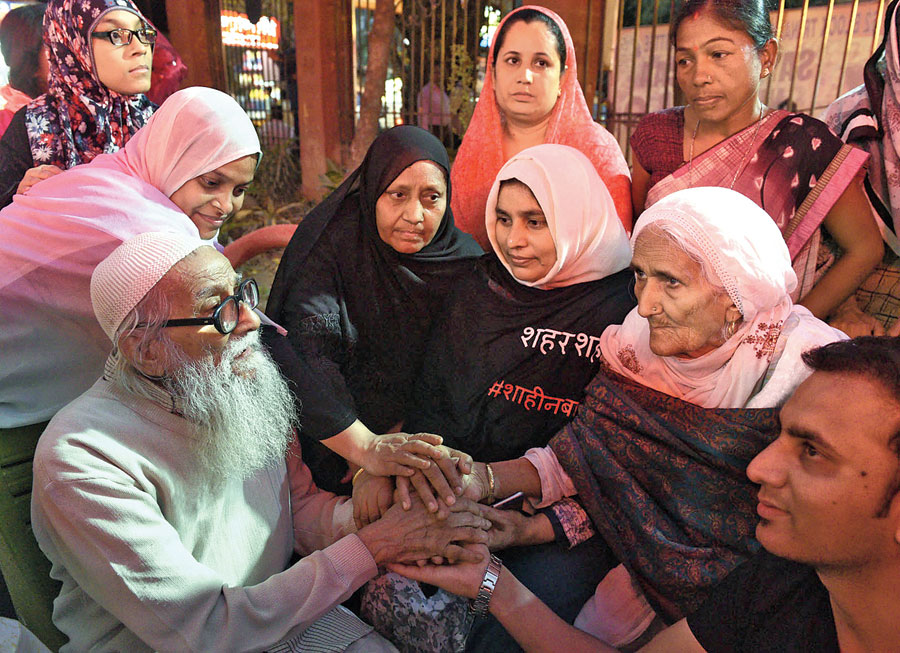 Bilkis (second from right) with Mohammad Nayeem, a 90-year-old man who needed help to walk but was determined to meet the dadi from Shaheen Bagh. The two spent around five minutes, sitting across each other. Hardly a word was spoken as he grasped her hand and nodded several times.
Picture by Pradip Sanyal
Debraj Mitra   |   Calcutta   |   Published 27.02.20, 08:44 PM

Bilkis, 82, would have still been washing utensils and working on the farm or looking after her grandchildren had it not been for the future of the country’s children.

One of the dabang (fearless) dadis of Shaheen Bagh, Bilkis was in the city on Thursday to strengthen the protests against the new citizenship regime.

“I stepped out to protest because I saw our kids being assaulted. If there are no children, what do we do with the future?” asked Bilkis, one of the senior citizens at the longest women-led vigil against the amended citizenship act .

Bilkis’s tour of Calcutta, organised by a citizens’ forum, is packed with visits to demonstrations at Belgachhia, Rajabazar, Kidderpore and Park Circus.

Dadi certainly lives up to her dabang moniker. “The cold was biting. We stayed put. The summer is also going to be harsh. But we are not going anywhere unless the black law is repealed,” she said.

The Shaheen Bagh protesters endured Delhi’s coldest winter in over 100 years. The capital is also infamous for its gruelling summer.

Metro met Bilkis in the courtyard of a shopping complex on Marquis Street, where she spent some time with the residents of the area before heading for the demonstration in Belgachhia.

What the organisers had planned as a brief stopover continued for over 30 minutes. Men and women, of all ages, kept flocking to where Bilkis was seated, scrambling for a few seconds with her. She obliged hundreds of selfie requests and talked to everyone, shaking hands with grown-ups and stroking the heads of the younger ones.

The occupation of Shaheen Bagh has become the face of the protests against the Citizenship (Amendment) Act, National Population Register and National Register of Citizens.

It started on December 15, after the police crackdown on Jamia Millia Islamia, where students were beaten up by baton-wielding cops.

While several senior citizens have joined the 24x7 vigil in Delhi, three dadis, including Bilkis, became viral on social media after their appearance on a television channel.

Bilkis shifted to Delhi eight years ago, from a village in Uttar Pradesh. Her children and grandchildren have been settled in the Capital for over three decades, she said.

Before Shaheen Bagh, Bilkis’s life was taken up by household chores. “I was busy — cooking, working on the farm and bathing cattle. Even after shifting to Delhi, I spent most of my time with grandchildren. I would have continued doing that, had I not seen blood on the faces of children, in their twenties (bees-pacchis sal ke bacche),” Bilkis said.

The Delhi police allowed the violence to spiral because Amit Shah was stung by the Assembly election results, said the octogenarian.

At a January 27 rally in the run-up to the Delhi Assembly polls, Shah had urged voters to press the EVM button with such “anger” that the “current” was felt at Shaheen Bagh.

“He thought we would feel the current after the results. But it was Shah who felt the current. His party is unsettled and wants to instigate people further. That led to the violence and innocent citizens got killed,” Bilkis told Metro.

The dadi spoke about shedding “tears of blood” for lives lost in the violence. “But this fight is our only hope. This fight is for the future. We cannot abandon it now,” she said.

Among the hundreds who wanted a glimpse of Bilkis on Thursday was a 90-year-old man, one of the oldest in the neighbourhood with free flowing white beard and thick-framed glasses.

Mohammad Nayeem needed help to walk but was determined to meet the dadi from Shaheen Bagh. “His vision has blurred. He cannot read the newspaper. Most of the times, he is listening to news and debates on his phone. When he heard that a Shaheen Bagh dadi had come to our locality, he insisted on coming here,” said his granddaughter.

When the car came for Bilkis, she walked towards it with sprightly steps. “Chalo bhai, bahut jagah jana hai (Let’s go, there are several places to go),” she told the organisers.