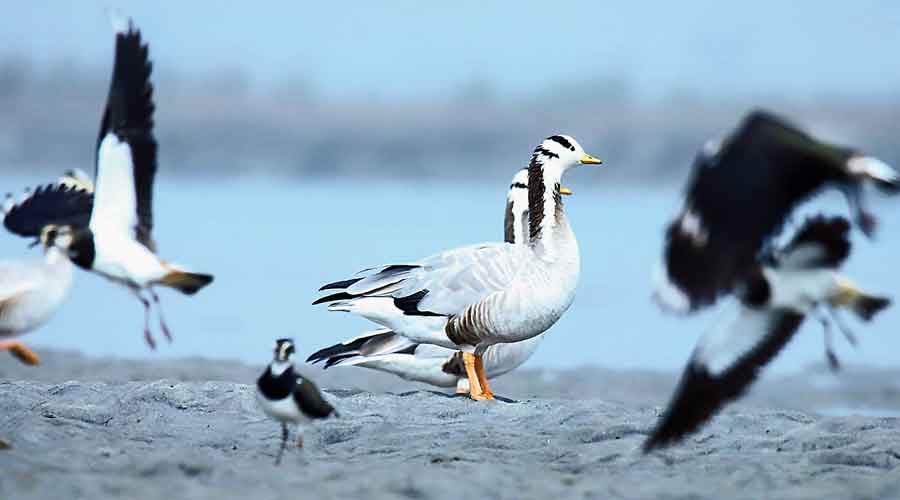 Around 70 species of migratory birds have been sighted in Gajoldoba located on the right bank of the Teesta in Jalpaiguri district and around 25km from here.

The birds were sighted by ornithologists and birdwatchers who joined to carry out the annual waterfowl count in Gajoldoba and at other waterbodies of north Bengal.

“We are conducting the annual waterfowl count in association with the state biodiversity board. This year, we recorded around 10,000 migratory birds in Gajoldoba on the Teesta and in its canal.  Last season, around 7,000 birds were spotted. Also, more species of migratory birds have thronged the location this year. Last winter, altogether 64 species were found while this year, at least 70 species have been sighted,” said Animesh Bose, the programme coordinator of Siliguri-based Himalayan Nature & Adventure Foundation (Hnaf) that has been carrying out the count.

“We have spotted many vagrant species of avian population that includes Smew,

Falcated Duck, Red Breasted Merganser and Dunlin. Also, Pacific Golden Plover, Bar-headed Goose and Northern Lapwing were some other major species which have been sighted in Gajoldoba,” Bose said.

In Gajoldoba, the Mamata Banerjee government has come up with the largest tourism project of the state.

The site has been named as “Bhorer Alo” (light of the dawn), and a series of infrastructure has come up at the location, including accommodations for tourists.  “The area has also been identified as a popular hotspot for birdwatchers and has made the chief minister name a portion of the hub, where the birds can be seen, as Pakhi Bitan. Especially in the winters, thousands of migratory birds can be found at the site. The area is fast gaining popularity and around 20-odd guides can be found at the site who can help visitors to identify the birds,” said a source in the state tourism department.

For the count, a 14-member team of Hnaf is carrying out the counting in five groups, along with foresters posted in different locations of north Bengal.

Apart from Gajoldoba, the waterfowl count would be carried out in nine other locations.
Telegraph photo

Apart from Gajoldoba, the waterfowl count would be carried out in nine other locations. Among these include Fulbari on the outskirts of Siliguri, the Murti-Jaldhaka area near Gorumara National Park, Torsha under Jaldapara National Park, Nararthali in Buxa Tiger Reserve, at Rasikbil in Cooch Behar, at the confluence of Teesta and Karala in Domohoni, and the confluence of Diana and Jaldhaka rivers at Gossainhat.

“Once the reports of bird counting of all these water bodies are ready, those will be collated and sent to the Bombay National History Society and to Wetland International. This time, we will also send a copy of the report to the West Bengal Biodiversity Board,” said a representative of HNAF.

The count, ornithologists said, is an important exercise from which various interpretations can be drawn with regard to the movement of migratory birds.

“It helps us to find out whether the birds are choosing any new locations, the types of species which are visiting any specific location and also, whether the environment at the water body is conducive for them,” said an ornithologist based in Siliguri.