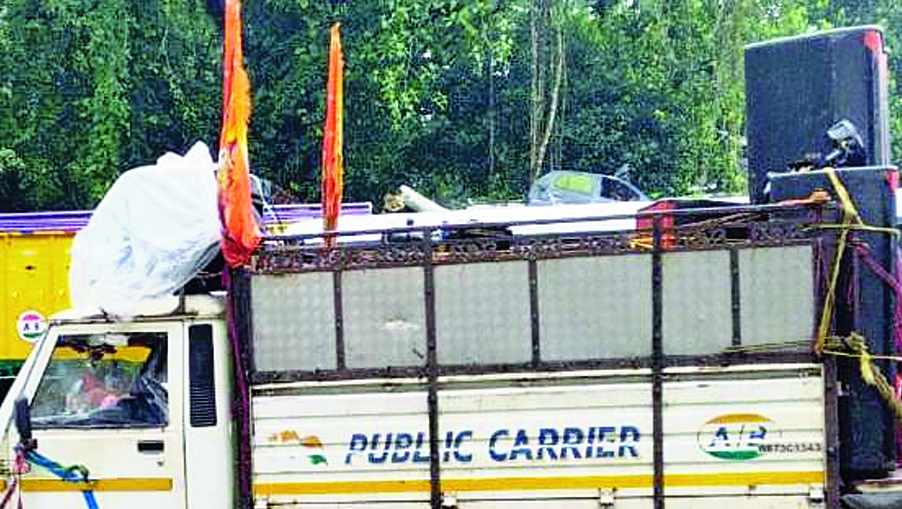 The pick-up van, on which the electrocution occurred, at Mekhliganj police station on Monday
Main Uddin Chisti
Our Correspondent   |   Cooch Behar   |   Published 02.08.22, 01:21 AM

The deceased and the injured were part of a 35-member group of pilgrims who had hired the van, sound boxes and a generator set. Police said preliminary investigation suggested that a short-circuit in the wiring of the generator set had triggered the electrocution.

All the pilgrims were from different villages under the jurisdiction of Sitalkuchi police station in Cooch Behar district. During the monsoon, thousands of devotees throng the Shiva temple at Jalpesh in Maynaguri block.

“The pilgrims had hired sound boxes and loaded a generator set in the rear of the pick-up van. The electrocution happened when the vehicle reached the Dharala river bridge under the jurisdiction of Mekhliganj police station. Preliminary investigations have revealed that there was a circuit in the wiring of the generator which led to the incident,” said Amit Verma, the additional superintendent of police of Mathabhanga.

All the 35 youths were rushed to the block primary health centre in the nearby Changrabandha.

“A medical officer declared 10 of them dead. Fourteen injured persons were referred to the super-specialty hospital in Jalpaiguri. The vehicle has been seized but the driver escaped. We are in search of him,” said Verma.

Later on Monday, nine were discharged from the Jalpaiguri hospital.

Pilgrims on a pick-up van with sound boxes at Jalpaiguri on Monday.
Biplab Basak

Soon after the tragedy, seven pilgrims who didn’t suffer any injury de-boarded the van and were found waiting for vehicles to return home. But the police took them also to the hospital for a check-up.

The boys, sources said, hailed from areas like Golenahati and Thakurpara near Sitalkuchi. The pilgrims mostly belonged to day-wage earners’ families.

Family members and relatives of the deceased and the injured rushed to Changrabandha and Jalpaiguri. A number of political leaders and police officers visited the villages and met the bereaved families.

In the afternoon, state minister Aroop Biswas took a flight from Calcutta and reached Bagdogra.

“I will visit the hospital in Jalpaiguri to check out the condition of those who are under treatment. Tomorrow, I will meet the affected families and hand over compensation to them. Mamata Banerjee and her government have always stood by people affected by tragedies,” Biswas said before heading for Jalpaiguri.

The incident has triggered questions whether use of sound boxes, along with mixer, and generators can be allowed to be carried on vehicles, especially during the monsoon.

“It is definitely risky to run a generator set on a running vehicle. There is always a chance of electrocution. These days, many youths are found carrying sound boxes and generators on vehicles and playing loud music as they set out for pilgrimage. This practice should be discouraged,” said Rakesh Dutta, a schoolteacher.

Fresh batch of over 5000 pilgrims leaves for Amarnath