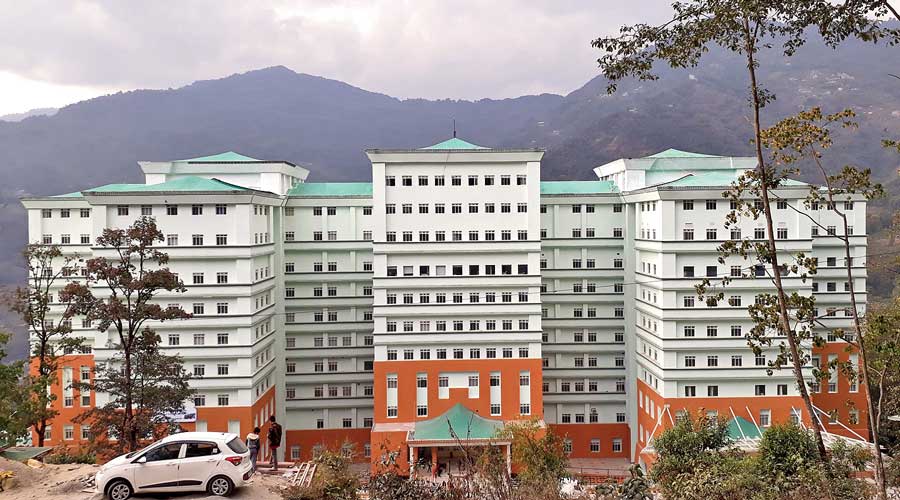 The surge in the spread of the novel coronavirus has put Sikkim’s health system to test with a 26-year-old woman patient dying on Saturday for want of bed in the ICU at the STNM Hospital in Gangtok, the state’s dedicated Covid treatment centre.

P. Chettri, the husband of the deceased, alleged his wife had died because she could not find a bed in the ICU despite her fast deteriorating condition.

“The nurses told me there were no empty beds in the ICU. The doctor, too, said not a single bed was available, and asked me what I planned to do… I also called up Manipal (the Central Referral Hospital, which is also in Gangtok), but there was no empty bed in the ICU there either,” he said.

Chhetri’s wife had been referred to the STNM Hospital from the Singtam District Hospital on Friday and breathed her last on Saturday morning. “One patient (in the ICU) was playing with his phone and appeared normal and was not critical at all. The night staff and doctor pleaded with him to vacate, but he refused,” he alleged.

The hospital authorities while admitting that the woman could not find a bed in the ICU, however, denied that patients who did not require critical care were being kept there. “As medical professionals, we provided all necessary treatment, including oxygen, to her outside (read High Dependency Unit), but such a sad incident happened. We are as hurt as her family,” said K. B. Gurung, the medical superintendent of the STNM Hospital.

Gurung said the hospital had nine beds in the ICU then and another 10 beds had been added since. The hospital, which started with 120 beds for Covid patients in the wake of the second wave of the deadly pandemic, has augmented the number of beds to 400.

Chief minister P. S. Tamang inspected all Covid facilities on Sunday and iterated that his government was geared up to meet the Covid challenge. “There is no panic-like situation here unlike other states. We have Remdesivir injections, we have our own oxygen plant, we have everything, including manpower,” he asserted.

Sikkim on Monday reported 27 new cases, taking the caseload since the start of the pandemic to 8468. With another death, the fatality count is 150.

The government has decided to bar inter-state and inter-district movements from May 6 to 16 and allow shops, other than those dealing in essential items and medicines, to open only between 10 am and 4 pm on all weekdays, according to sources. The decisions were taken at a state-level review meeting chaired by Tamang here on Monday.