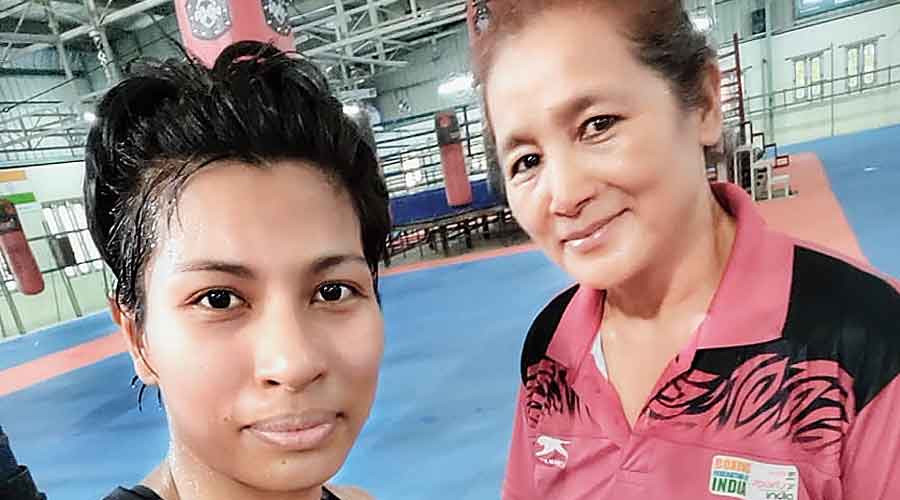 Ace Sikkim archer Tarundeep Rai might not have succeeded in his cherished dream of winning a medal for India at the Tokyo Olympics, but the tiny Himalayan state has had a hand in one of the three bronze medals the country has won so far, courtesy boxing coach Sandhya Gurung, whose ward Lovlina Borgohain has become the toast of the nation.

Following her bronze-winning effort on Wednesday, Lovlina recognised the roles of Sandhya and a host of others in her rise to Olympic glory.

I am grateful to everyone for your love and support.

Sandhya first met Lovlina at a sub-junior boxing camp in 2012, and since 2016, the “shy girl” from Baromukhia, a remote village in Assam, has been under her wings. “Ever since she took part in the sub-junior world championship in 2013, she had set her eyes on the Olympics. Now that she has achieved her goal of not just participating but also winning a medal, I am so proud of her,” Sandhya told The Telegraph.

Lovlina’s story of a girl from a family of modest means to Olympic glory is being well documented now, not so much her mentor, who, too, has an inspiring story of her own. From being paralysed as a teenager, to taking up boxing at a very late stage and now coaching her ward to podium finish at the Olympics, the 50-year-old from Gangtok is a hero herself.

“I had met with an accident and was paralysed for three years as a teenager. I recovered and got married a few years later. Eleven years after my marriage in 1989, I took to boxing in 2000,” said Sandhya, adding that she was initiated into boxing by her husband Manoj Kumar Limbu, who is the contemporary of former Olympian boxer Jas Lal Pradhan.

Jas Lal is the first of the only two Olympians from Sikkim. The other is Tarundeep, who lost in both the team and individual archery events in Tokyo 2020, which was his third Olympics.

Sandhya, though, could not reach Olympian heights as a boxer, but did take part in various national and international level tournaments between 2000 and 2008, winning some of them.

After hanging up her gloves in 2008, she decided to take to coaching and enrolled for one-year diploma’s course in boxing at the Sports Authority of India (SAI)’s Netaji Subash Eastern Centre in Calcutta with the support of the Sikkim sports department and then sports minister and present chief minister P. S. Tamang (Golay).

“On completion of my diploma, I started coaching from 2010 onwards. I am presently attached with the National Boxing Coaching Camp with Elite Women at the Indira Gandhi Stadium in New Delhi,” she told The Telegraph.

The Boxing Federation of India and SAI jointly run national camps under different categories at different centres in the country all-year round.