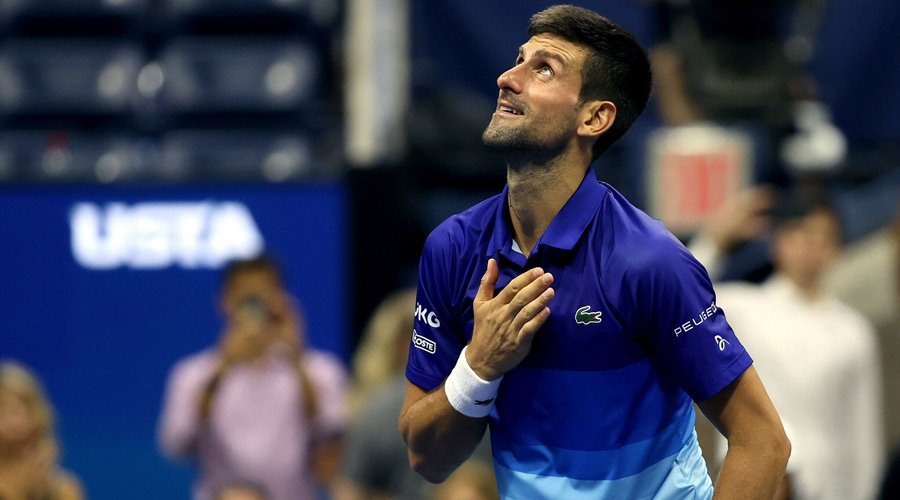 Novak Djokovic fought back from a set down to beat Matteo Berrettini 5-7, 6-2, 6-2, 6-3 and move into the US Open semi-finals on Wednesday. The Serb is now just two wins away from a 21st major that would complete a calendar-year Grand Slam.

Djokovic will face fourth seed Alexander Zverev, the player who last month ended his bid for a Golden Slam by beating him in the Tokyo Olympics semi-finals.

Djokovic swatted away questions about his attempt to become the first man since Rod Laver in 1969 to sweep all four majors in the same calendar year. He cut off Patrick McEnroe during an on-court interview.

“You don’t have to ask me anything about that,” he said. “I don’t want to think about it, I know it’s there, just focusing on the next match.”

“He’s in a fantastic form,” said Djokovic. “Of course looking at his results over the past few years, he’s played very well here on this court. I know it’s going to be battle, even harder than it was today but I’m ready for it.”

Berrettini’s lone break on Wednesday came during a grinding opening set that lasted 77 minutes, the Italian making the breakthrough to go ahead 6-5 before sealing the opener. It marked the third straight match in which Djokovic had dropped the first set. “When I lost the first set I managed to forget about it and move on,” said Djokovic.

Zverev is one win from returning to a second consecutive final here and having another shot at a first career major title after losing to Dominic Thiem last year.

An improved serve has been a major factor in Zverev’s winning run and again contributed to his win over Harris as the German fired down 21 aces and won 82 per cent of his first-serve points.

“I’ve said it before, the serve is the shot I’ve spent the most time on,” said Zverev.

Maria Sakkari leveraged her powerful serve and excellent court coverage to reach the semi-finals with a 6-4, 6-4 victory over Karolina Pliskova, and dedicated her win to the people of Greece, who have endured a summer of brutal wildfires.

The Greek 17th seed maintained the aggression in the second set, converting a break point in the seventh game as the 2016 runner-up Pliskova failed to match her intensity.

Sakkari will need all her energy in her semi-final against British teen Emma Raducanu, who has not dropped a set since arriving at Flushing Meadows as a qualifier.