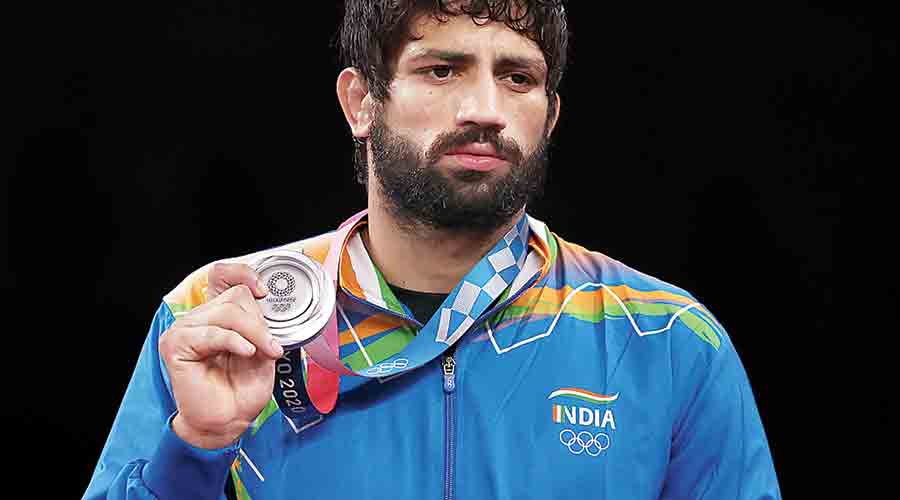 Wrestler Ravi Dahiya, nominated for the Khel Ratna on Wednesday, is focused on his original goal — an Olympic gold medal.

At the Tokyo Olympics, he lost to two-time defending world champion Zavur Uguev in the men’s freestyle 57kg final and had to settle for silver. So now, a gold in Paris is on his radar.

“Yes my goal was gold in Tokyo. I worked very hard for it and I was a bit disappointed that I lost by a very small margin. I still feel I could have got it (gold),” Dahiya told The Telegraph.

“But that has only made me stronger. I am preparing in all earnest for the upcoming competitions. I still have to get back to my serious routine but I have ensured that I am in constant training. I am learning from my experience and growing every single day.

“Yes I want to win the gold medal and the preparations for Paris will be the upcoming big competitions. I have to perform consistently in these competitions to make myself ready for Paris 2024.”

The wrestler is naturally thrilled to be nominated for the Khel Ratna, the highest honour bestowed on a sportsperson in India.

“It is a great honour to be nominated for the Khel Ratna. This gives me even more encouragement to earn more medals for India,” Dahiya said.

With the Asian Games and the Commonwealth Games scheduled for next year, Dahiya will get a measure of his competition ahead of Paris.

But has life changed for the 23-year-old from Nahri village in Sonipat, where he is fondly called ‘Moni Pehalwaan’, after his success in Tokyo?

“I was overwhelmed with so much love and support I received after coming back from the Olympics. It was simply unreal and fantastic. But I try so that the new-found fame doesn’t get to me. My life is still the same.

“The day I got back from Tokyo, I went straight to the stadium (Chhatrasal in New Delhi) as I knew I had to be in practice. I had to attend many functions, but I ensured I didn’t miss my training. I want to work even harder to change the colour of my Olympic medal.”

Dahiya has also been giving back to the society. His association with Smile Foundation has helped underprivileged children.

Asked about his involvement, a passionate Dahiya said: “Smile foundation is doing fantastic work in the area of education for underprivileged kids with their Shiksha Na Ruke initiative which I really am happy to be part of.

“The pandemic has affected many industries but education has taken a massive hit, especially for the kids whose schools were shut and they had to depend on online education. But our country has so many families who can’t even afford a smart phone. I believe we have to ensure no kid is deprived of education.”