Paine sorry for misses that let his bowlers down 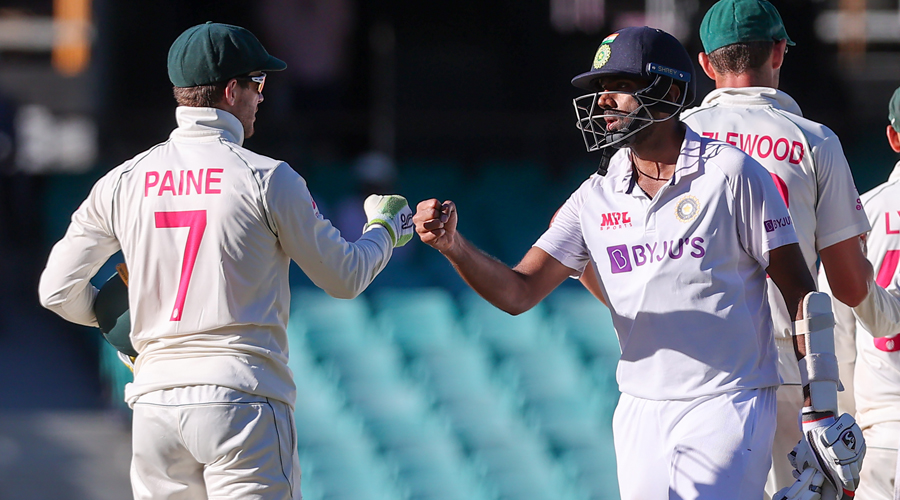 Paine did try to distract Ashwin with his chirping from behind the stumps, reflecting the hosts’ growing frustration.
Twitter / @CricketAus
Our Bureau   |     |   Published 12.01.21, 03:40 AM

Dropping as many as three catches on the final day, captain Tim Paine too was one of the reasons behind Australia’s inability to enforce a result in the third Test at the SCG.

The ’keeper-batsman admitted having let his bowlers down, especially on a pitch that hadn’t deteriorated much even on Day V.

“I pride myself on my wicketkeeping. I haven’t had too many worse days than today (Monday),” Paine said at the post-match virtual conference facilitated by Sony Pictures Sports Network.

Rishabh Pant, whose counter-attacking 97 raised hopes of India’s victory, was first dropped by Paine when on three and again on 56, with Nathan Lyon being the unfortunate bowler on both occasions. With more than eight overs remaining, Paine dropped yet another catch — ironically after his verbal exchange with Ravichandran Ashwin — and the lucky batsman then was Hanuma Vihari.

“It’s a horrible feeling knowing our fast bowlers and spinner bowled their hearts out and gave everything for the team. I certainly feel I let them down.

“I have to wear that, but I’ll get another crack at it next week, so we move on,” the skipper stated.

Pant’s aggression brought back memories of the Headingley Test of Ashes 2019, where Ben Stokes single-handedly led England to victory. Paine, though, insisted that wasn’t on his mind.

“Rishabh played an amazing innings. But at no stage did we have that (Headingley-like) feeling. We thought we had plenty on the board.”

Paine did try to distract Ashwin with his chirping from behind the stumps, reflecting the hosts’ growing frustration. “There was a bit of byplay going on. They were wasting a bit of time, and we were getting frustrated.

“Ashwin had a bit to say back, as it’s all a part of the game. No harm done,” Paine argued.