India’s top order comprising Cheteshwar Pujara, Virat Kohli and Ajinkya Rahane hasn’t infused the confidence in their bowlers, which is vital for success in England 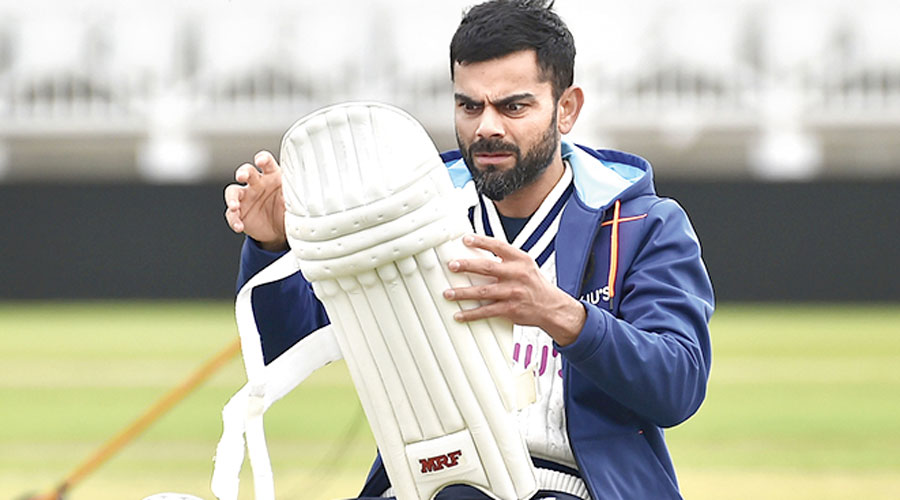 India captain Virat Kohli pads up during net practice in Nottingham ahead of the first Test against England from Wednesday.
AP/PTI
Indranil Majumdar   |   Published 04.08.21, 01:17 AM

The countdown to India’s Test series in England has lacked the usual hype and the only spark was provided last week when Ben Stokes decided to take an indefinite break because of mental health issues.

If Virat Kohli’s men experienced a sudden rush of adrenaline ahead of Wednesday’s opening day in Nottingham, they have to sort out their batting woes to seize the key moments. The absence of Stokes along with the injured Jofra Archer will make the visitors’ task easier, but the shortcomings against the moving ball could return to haunt them.

Shubman Gill’s injury and Mayank Agarwal getting concussed during practice on Monday has altered equations. It’s more or less certain that KL Rahul will open with Rohit Sharma. Rahul has opened in 34 of his 36 Tests and scored a century in India’s last Test in England — 149 at The Oval in 2018.

India’s top order comprising Cheteshwar Pujara, Virat Kohli and Ajinkya Rahane hasn’t infused the confidence in their bowlers, which is vital for success in England.

There’s no doubt that the India captain’s discipline outside the off stump will be tested once again by the likes of James Anderson, having taken a cue from the mode of his dismissal against Kyle Jamieson on the final morning of the inaugural World Test Championship final.

Anderson is three years older while Kohli has become richer in experience since the 2018 tour when his shot selection was immaculate against the moving ball. There’s no reason he can’t enjoy that form again in the second half of the English summer, but it’s his average below 30 since 2020 which is worrying.

Since his hundred at Eden Gardens in November 2019, he has gone 14 Tests and 46 international innings without a century. It is only expected that he will find form during the next six weeks that will feature five Tests.

Pujara’s dour approach is vital, but it’s his intent that always comes under scrutiny. Pujara averages 46.08 in 86 Tests, but in England it has dropped to 29.41 in nine Tests.

“I honestly feel a player of his calibre and experience should be left alone and it should be absolutely with the individual to figure out what the drawbacks in his game are,” Kohli said on Tuesday.

Rahane’s case is concerning too. He led India to victory in Australia in Kohli’s absence and scored a series defining hundred in Melbourne. He has only one fifty in 13 innings since.

The green top at Trent Bridge could force the batsmen to go back to the drawing board. The Indian think-tank is not taking chances and could play four seamers with Ravichandran Ashwin being the sole spinner. Mohammed Siraj is almost a certainty with Ishant Sharma, Mohammed Shami and Jasprit Bumrah.

India last won the Pataudi Trophy in 2007 under Rahul Dravid’s leadership. The lure of winning a Test series in Australia and England in the same year will push them in what is likely to be Ravi Shastri’s final Test series in charge.