Teenagers Emma Raducanu, Leylah Fernandez to square off in US Open final

They will meet in the first major summit clash between two teens since 1999, when a 17-year-old Serena Williams defeated 18-year-old Martina Hingis 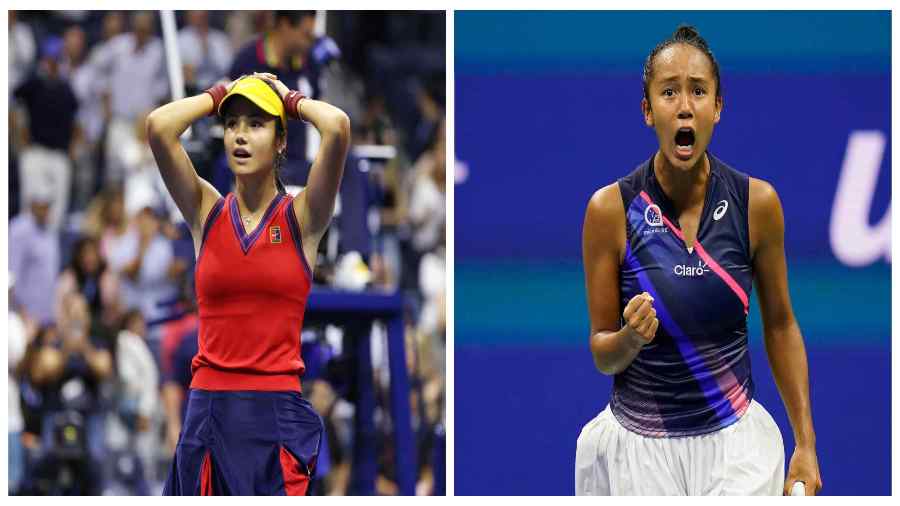 Emma Raducanu and Leylah Fernandez are so similar in so many ways: They possess enviable quickness and anticipation. They take balls low to the ground and redirect them with ease. They don't care how much better-known or more successful opponents are. They love the big moment.

They'll be back in Arthur Ashe Stadium on Saturday for the first major final between two teens since the 1999 U.S. Open, when Serena Williams, 17, defeated Martina Hingis, 18.

Raducanu became the first qualifier to reach a Grand Slam final in the professional era by overwhelming 17th-seeded Maria Sakkari 6-1, 6-4. Appearing in just her second major tournament, Raducanu won all 18 sets she has played during three matches in qualifying rounds and six in the main draw.

"I've just been taking care of each day," Raducanu said. "And before you know it, three weeks later, I'm in the final and I can't believe it."

Who can? Not Raducanu, who originally bought a plane ticket to leave New York after qualifying ended, figuring that might be the end of her stay.

Quickly, she led Sakkari 5-0 and nothing really changed from there. Sakkari earned seven break points in that span; Raducanu got three. The difference? Sakkari couldn't convert any; Raducanu took advantage of two chances or, better, accepted her opponent's generosity on two of them, once on a netted backhand, once on a double-fault.

By the end, Raducanu made just 17 unforced errors to Sakkari's 33 and now is the youngest Slam finalist since Maria Sharapova won Wimbledon at age 17 in 2004.

Fernandez isn't much older her birthday was Monday and she made it through a semifinal filled with momentum swings to edge No. 2 Aryna Sabalenka 7-6 (3), 4-6, 6-4.

"They are both young. They play fearless," Sakkari said about Raducanu and Fernandez.

"They have nothing to lose playing against us."

Raducanu agreed with that assessment, saying, "Being young, there is an element of you do play completely free."

Sakkari is 26, Sabalenka 23. Each recently made her debut in a Grand Slam semifinal: Sakkari lost in that round at the French Open in June, Sabalenka at Wimbledon in July.

"I'm sad," Sakkari said. "I'm very broken that I couldn't make it to my first final, once again. But I'm positive that it will come sometime soon."

Wimbledon was Raducanu's only previous major tournament; she entered via a wild-card entry with a ranking outside the top 300 and made it to the fourth round before stopping in the second set because of trouble breathing. Fernandez's best past showing at a Slam was getting to the third round at Roland Garros last year.

At the outset Thursday, Sabalenka looked in control, claiming 12 of the first 14 points for a 3-0 lead. Just eight minutes had elapsed and most spectators were yet to reach their seats. Not until later did the 20,000-plus in the stands rally the fist-aloft Fernandez with chants of Let's go, Leylah! Let's go! accompanied by rhythmic clapping.

"I'm glad that whatever I'm doing on court, the fans are loving it and I'm loving it, too" Fernandez said.

At the end of the first set and again the third, it was Sabalenka who let things get away from her. In the last game, she double-faulted twice in a row to set up match point, then sailed a forehand long.

This, Sabalenka said, is what we call pressure.

No matter what, seemingly, Fernandez did not feel it. Didn't waver. And why would she at this point? Her poise, much like Raducanu's, is as limitless as their potential.

This was the left-handed Fernandez's fourth consecutive three-set victory over a seeded opponent. First came No. 3 Naomi Osaka, the 2018 and 2020 U.S. Open champion. Then came No. 16 Angelique Kerber, the 2016 champ. That was followed by No. 5 Elina Svitolina and Sabalenka.

There's no limit to what I can do. I'm just glad that right now everything's going well, said Fernandez, who could give Canada its second U.S. Open women's title in quick succession, following Bianca Andreescu's triumph in 2019.

Raducanu and Fernandez are both very much citizens of the world.

Raducanu was born in Toronto to a Chinese mother and Romanian father; the family moved to England when Emma was 2.

Fernandez was born in Montreal to a Filipino Canadian mother and Ecuadorian father; the family moved to Florida after Leylah had success as a junior at age 12. Dad is also her coach, although he is not with her in New York, instead offering coaching tips in daily phone conversations.

Perhaps he told his daughter to let Sabalenka make all the mistakes in a tiebreaker, because that's what happened at the conclusion of the first set. Sabalenka went up 2-0 and then completely lost her way. Every point won by Fernandez came courtesy of a miss by Sabalenka.