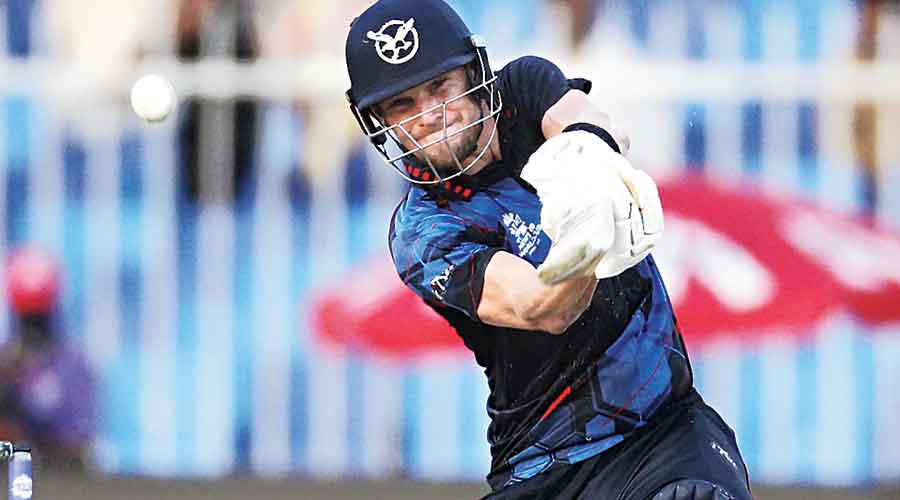 Minnows Namibia pulled off an upset in their final preliminary round match, stunning Test-playing nation Ireland to advance to the Super 12 stage of the men’s T20 World Cup on Friday.

“I said in the press conference that we run a tight ship,” an emotional Erasmus said after the win.

“It’s a small country, and a small number of people play cricket. We should be proud of ourselves.”

Opting to bat, Ireland  settled for a below-par 125 for eight. Namibia made a quiet start to their chase.

Needing 77 off the last 10 overs, Erasmus and Zane Green (24) shared 48 runs for the second wicket to keep Namibia in the contest.

The duo played sensibly and brought down the equation to 55 off 42 balls.

But Green failed to clear Kevin O’Brien at mid-off to make the clash interesting.

After his two wickets with the ball, Wiese came to Namibia’s rescue by hitting Craig Young for back-to-back sixes in the 15th over.

Needing 21 off 18 balls, Erasmus lofted off-spinner Simi Singh over the long-off boundary and then struck two boundaries in the 19th over off Craig Young to finish off the chase in style with nine balls remaining.

Namibia have joined Sri Lanka in the Super 12s from Group A.

In the second match of the day, an inconsequential one, Sri Lanka, who had already qualified for the Super 12, thrashed the Netherlands by eight wickets.

The spin duo of Wanindu Hasaranga and Maheesh Theekshana bamboozled the Dutch, bowling them out for a paltry 44, the sixth lowest total in T20 history. Lanka then cantered to the target in just 7.1 overs.

Dutch all-rounder Ryan ten Doeschate announced his retirement from international cricket after the match, though he was not a part of the playing XI on Friday.