Spain has no track record in badminton. Before Marin only one Spanish player had ever won a match at the Olympics 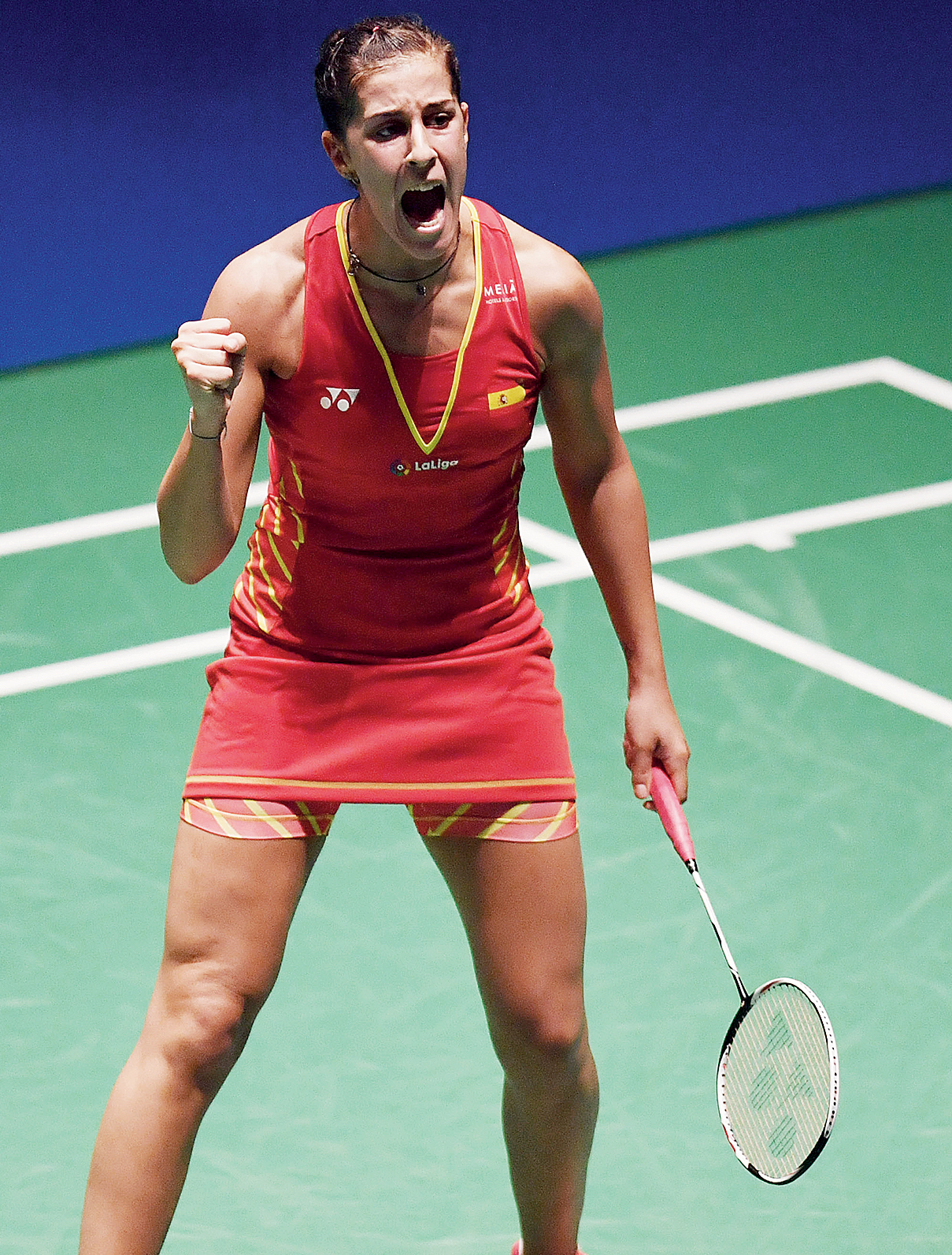 Playing badminton, I’ve always known what I wanted to do and I’ve been willing to train very hard for it, even when it’s got physically painful. Those who watch me train say that I’m a bit bruta — Marin
Agency picture
Raphael Minder /The New York Times News Service   |   Published 03.12.18, 06:53 PM

As a child, Carolina Marin was drawn to badminton because of its oddness, an attraction that grew once she switched from plastic shuttlecocks to the ones used for competition, each made of 16 feathers plucked from the left wings of geese.

“In tennis, a ball is a ball, but trying to control these feathers just felt really weird,” she said.

Now Marin, 25, is something of an oddity herself.

In August, she became the first woman to win three world singles championships. At the 2016 Olympic Games, she became the first European woman to win a gold medal in badminton, ending the longstanding domination of Asian players. The feat was all the more remarkable because Spain had no track record in badminton: Before Marin, only one Spanish player had ever won a match at the Olympics.

“Playing badminton, I’ve always known what I wanted to do and I’ve been willing to train very hard for it, even when it’s got physically painful,” Marin said. “Those who watch me train say that I’m a bit bruta,” she added, using a Spanish word for rough.

“I think the fact that more people now recognise me when I’m crossing the street in Jakarta and other places in Asia than in my own country shows in itself just how much effort I’ve had to make to get to where I am,” she said.

Marin has risen through the world rankings with the help of a Spanish national coach, Fernando Rivas, who spotted her talent at a tournament when she was 13. Rivas persuaded Marin’s parents to let her leave the family home in Huelva, in southern Spain, to train with him at Madrid’s national sports centre. There, Marin’s skill and single-mindedness, and Rivas’s coaching, helped her develop into the world’s best player.

Rivas said that Marin stood out as a teenager not only because of her exceptional speed, but also because of her ability to change pace and “read the game” in a way few young players can. Badminton, he said, demands explosive movements but also relies heavily on deception, akin to the way a volleyball player jumps and pretends to ready a violent smash, only to change direction or gently loop the ball over the net.

During a morning training session in October, Marin moved back and forth relentlessly between the net and the back line of the court in one drill, returning the shots of her practice partners, who alternated drop shots and lobs. At other times, she is the one changing the pace.

“I’m a quick and aggressive player who’s always looking to keep the opponent under pressure,” she said. “If you compare tennis and badminton, we play on a smaller court, with a shuttlecock that crosses the net faster than a ball, so that makes our sport much more explosive — and that suits me just fine.”

Marin won her first world championship title in 2014, overcoming a stress fracture in her foot that had left her, a week before the competition, wondering if she would be fit enough to play at all.

When she did play, and won, her triumph caught the Spanish federation so unprepared that it ignited an open feud over who should reap the financial benefits from the surprising victory. Federation officials tried to force Marin to cede her suddenly marketable commercial rights to the organisation. When she refused, the federation escalated the dispute by withdrawing Spain’s team from a European tournament.

Marin eventually prevailed, keeping control of her commercial rights. And while her advisers would not disclose her precise earnings, they said she had collected more from about 10 sponsorship contracts than the $578,000 in tournament prize money that she had accumulated in her career.

She has made peace with the federation, too, even if she remains critical of the sport’s administrators in Spain, and particularly their failure to promote badminton more extensively in light of her success. The number of licensed players in Spain last year had climbed to only about 7,800, from 6,000 a decade earlier.

“Badminton could be a lot more popular, but I really don’t know what all the people in the federation are doing — or if they’re doing the work that should be done,” Marin said. The federation, she said, remains “disconnected” from the players, to the point that officials still do not watch her and other top players train in Madrid.

But dismal participation numbers might have worked in Marin’s favour at the start of her career, because she could stand out faster than athletes growing up in countries with more established national programmes, coaching methods and hierarchies.

Anders Thomsen, who has worked with Rivas as a coach for Marin since 2008, said she was “probably lucky there wasn’t a real structure for badminton in Spain” at the beginning of her career. Thomsen played and then coached in his native Denmark, one of the few European countries where badminton is among the most popular sports. In his home city, Viborg, Thomsen said, there are seven badminton clubs that nurture players at least until they turn 18, after which the best move on to train under the supervision of the national federation.

“Carolina found herself at 14 getting all the possible attention within a national centre,” Thomsen said, “because there really was nobody better than her in Spain.”

These days, Marin’s unmatched skill means that she practises against nationally ranked male players, rather than the two other female players at Madrid’s national centre.

“If I was training with the other girls, the quality of the training would fall a lot because they can’t cope with my pace,” Marin said. “Of course I would love to have the opportunity that others have in Asia, to have several other girls of a high level with whom to train. We’ve spoken for a while with the federation about bringing some foreign players over, but it’s not that easy to do.”

One of her sparring partners, Alvaro Vazquez, described Marin as an inspiration, while acknowledging a similar frustration that her success had not translated into a broader appreciation in Spain of the complexity of badminton.

“I think most people in Spain still think of badminton as something that you play for fun on the beach,” he said, “when in fact, you can’t really play on the beach because of the wind.”

Rivas, who continues to oversee the national team, is not optimistic that he or the federation will find another Spaniard capable of following in Marin’s footsteps, at least not in the way Spain has produced an armada of highly ranked tennis players, led for more than a decade by Rafael Nadal.

“I don’t think that Spain will find another Carolina in 1,000 years,” Rivas said. “My main job is not to find another star, but maintain the one that we have.”