South Africa has ‘100s’ of worries

At stumps on Day II, South Africa were reeling at 9/2 after India declared their first innings at 497/9 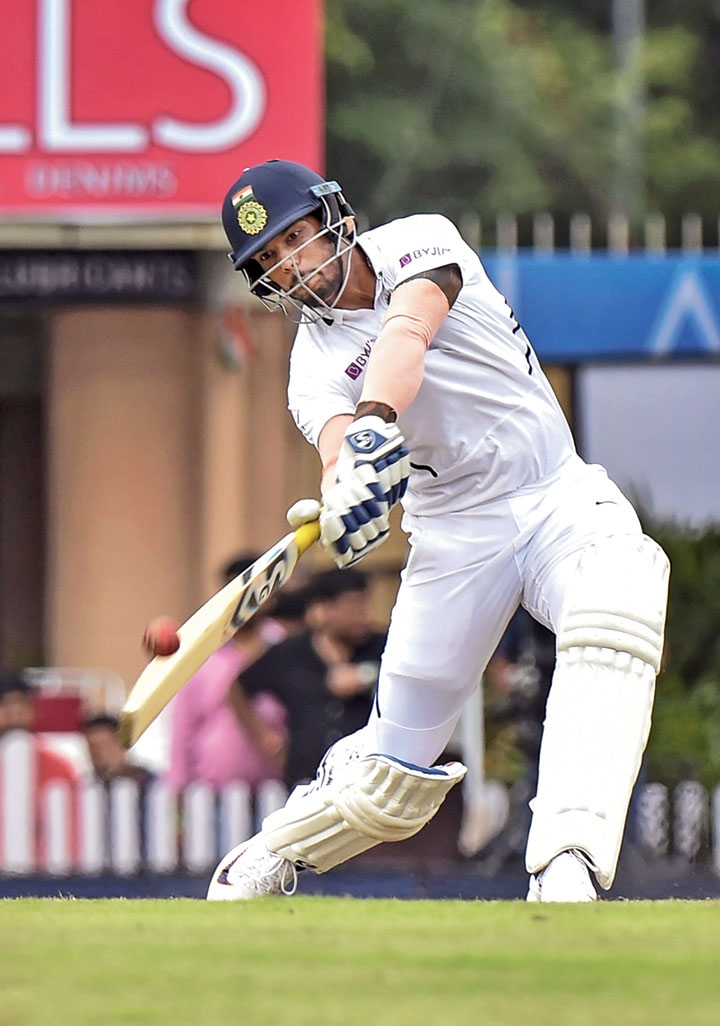 When Rohit Sharma was named as one of India’s openers for this Test series, even his most loyal backers would not have known if he would be able to replicate his form in white-ball cricket in the longest format of the game.

But India’s limited-overs vice-captain not only vindicated the team management and selectors’ faith in him, but also made a massive statement with his maiden Test double-century — 212 — on Sunday. And so did Ajinkya Rahane (115), as India continue to bully South Africa by being in total control of the third and final Test at the JSCA International Stadium and take big strides towards a 3-0 sweep.

At stumps on Day II, South Africa, as expected, were reeling at 9/2 after India declared their first innings at 497/9. The declaration, at tea, must have come as a relief for the Proteas as they had to bear the ignominy of being carted for as many as five maximums by India’s No.9 batsman Umesh Yadav, whose 10-ball 31 helped the home team race towards 500.

After Rohit and Rahane ruled over them for almost three sessions, what the South African bowling attack — probably their weakest since readmission in international cricket — went through was sheer harassment.

Had the final session on Day I not ended so early, the visitors would have been chasing a far bigger total. After India’s declaration, the South African batsmen continued to struggle before bad light again stopped play with 34 overs still remaining in the day.

One can only feel for Shaun Pollock and Graeme Smith, looking at their grim faces in the commentary box. When they played, it was mostly about the Indian batsmen facing the chin music from the Proteas pacers. But the story has turned turtle.

On Sunday afternoon, the two former South Africa captains had to witness the current lot’s utter helplessness against the India pacers’ well-directed short-pitched bowling and a probing line and length. That’s something South Africa’s current set of pacers, barring Kagiso Rabada to a little extent, couldn’t do at all.

Even debutant Shahbaz Nadeem gave nothing away in his two overs of left-arm spin.

In fading light, Dean Elgar and Quinton de Kock looked clueless before the bouncers from Mohammed Shami and Umesh, and thus, perished.

Credit, however, goes to India’s batsmen for making excellent use of the conditions and ensuring scoreboard pressure on South Africa right through the series. But in the ongoing Test, it’s Rohit and Rahane’s 267-run partnership that stands out so far, for they kept calm and didn’t buckle despite a top-order collapse on the first morning of the game.

Resuming on the overnight total of 224/3, the two Mumbai batsmen were quick to switch on. Rohit was watchful in the day’s first over bowled by Rabada, but Rahane got going with two superbly placed cover drives, again underlining his intent with those two strokes.

Rohit too didn’t take longer to add to his overnight score as the duo went about their business with ease and complete command.

On 92, what Rahane needed was a boundary, a two and couple of singles that helped him to his 11th Test hundred and first at home after the 188 he hit in 2016 versus New Zealand.

Rahane fell to George Linde (4/133) shortly after his hundred. All eyes then were on Rohit, who after crossing 150, made his intentions clear of reaching the double hundred before lunch itself.

Going to lunch at 199, Rohit had to play out the first over of the post-lunch session with Lungi Ngidi landing it on right spots. But as soon as Ngidi erred in his second over of that session, Rohit majestically pulled him over the mid-wicket region and reached the landmark.