Russell, who plays for the Kolkata Knight Riders, has so far amassed 257 runs in six matches 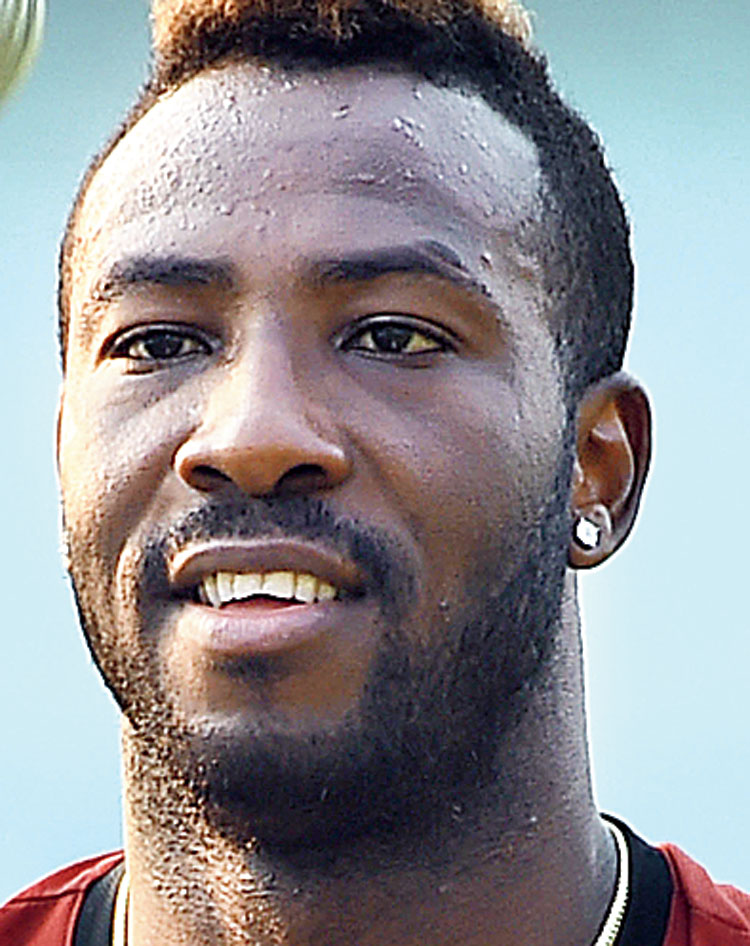 How can one stop Andre Russell? Sourav Ganguly offered a simple solution: “Get him out.”

No matter how humorous that sounds, it only tells you the awe that Russell commands currently.

Russell, who plays for the Kolkata Knight Riders, has so far amassed 257 runs in six matches at an average of 128.50 in the ongoing IPL XII.

The Knight Riders, who returned to base on Wednesday evening after a crushing loss against the Chennai Super Kings, will play their next match against the Delhi Capitals, at the Eden on Friday. Sourav is donning the adviser’s hat for the Delhi franchise this season.

It’s needless to say that the cheers for Russell, who is nowadays referred to as ‘Dre Russ’, were the loudest at the airport.

The impromptu crowd that had gathered at the airport to catch a glimpse of the Knight Riders players chanted the Caribbean superstar’s name once he emerged from one of the arrival gates.

Sourav, a former India captain, was asked what would have been his strategy against Russell had he been in charge of the Delhi Capitals team.

The 46-year-old came up with a more matter-of-factly reply this time: “We haven’t decided anything about strategy for Friday’s game yet… In fact, we haven’t practised here yet.

“We will decide on something after speaking to (captain) Shreyas Iyer.”

However, Sourav, who is also the president of the Cricket Association of Bengal (CAB), doffed his hat to Russell’s enormous power as a batsman. Asked how would he describe Russell, the batsman, Sourav smiled and said: “Power… His power is the sum total of all of us standing here!”

With the Delhi Capitals squad boasting of a couple of top-class pacers in Kagiso Rabada and Trent Boult, much of the spotlight ahead of the match is on the Eden Gardens pitch.

A few CAB insiders hinted that the wicket to be used on Friday could assist the speedsters, but Sourav didn’t want to speak much on the matter.

“You will know about the nature of the wicket on the day of the match. Whatever it is, whichever team plays well will win, it’s simple,” Sourav said.

While the Knight Riders have eight points from six matches, the Delhi Capitals have six from as many games. But Sourav refused to read too much into those numbers. “No team is ahead…

“At this stage, all are more or less in the same position with the Super Kings slightly ahead.” Mahendra Singh Dhoni’s team are on 10 points.

Sourav was also asked about Rohit Sharma’s injury. Mumbai Indians captain Rohit, who opens the batting for India in the ODIs, sat out Wednesday’s game against the Kings XI Punjab in Mumbai with a leg spasm.

With the World Cup just one-and-a-half months away, is their anything to worry about Rohit? Sourav doesn’t think so. “I don’t think there is any concern…

“There’s still enough time before the World Cup, he will surely be alright.”

The selection of India’s Cup-bound squad is scheduled to be done on Monday. Speaking on that, Sourav said: “With the IPL going on, the current performances might be taken into consideration.

“But a player’s overall form in the last few months will also be very important for selection.”

The ‘conflict of interest’ allegations against him notwithstanding, Sourav, in all likelihood, can sit in the Delhi Capitals dugout on Friday if he wishes to.

Asked if he expects the Eden to be divided in support, the city’s favourite son said: “But that’s not something new… I have been seeing that from 1996.”

The Knight Riders will be ready though. It seems they have overcome the disappointment in Chennai.

In a video posted on the team’s social media account, one could see Lynn’s face being smeared with the birthday cake even as teammate Robin Uthappa poured some beverage on the Australian’s head. Russell took a selfie with the birthday boy. The Australian, by the way, turned 29 on Wednesday.

But will it be a cakewalk for the home team against Sourav’s boys on Friday? Wait and watch.