Executing the sweep to good effect and latching on to anything that was in his zone, the batsman smashed a masterful century (161) 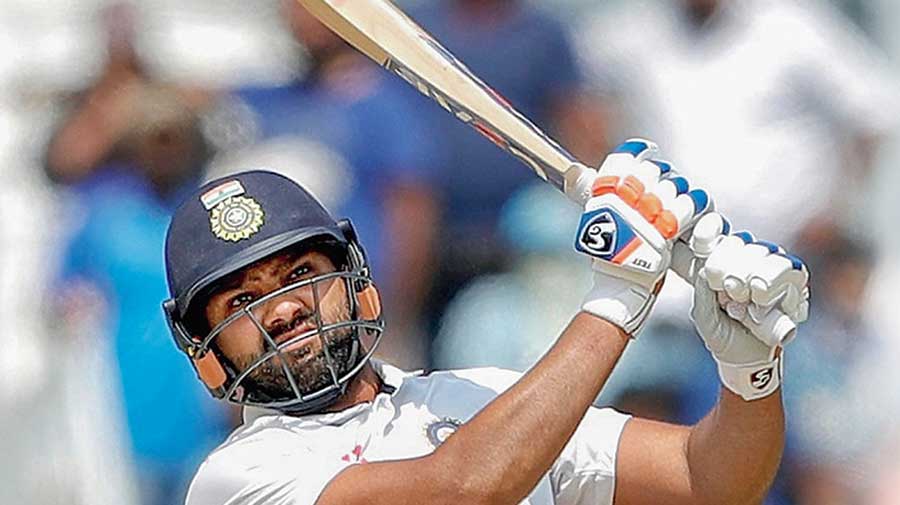 On a pitch that threatened to be a nightmare for batsmen from Day I, Rohit Sharma played like a dream.

Irrespective of the format, Rohit always spells danger for oppositions in Indian conditions. Executing the sweep to good effect and latching on to anything that was in his zone, Rohit smashed a masterful century (161) — his seventh

in Test cricket — and stitched two pivotal stands of 85 and 162 with Cheteshwar Pujara and Ajinkya Rahane (67), respectively, to give India the upper hand on a difficult wicket at Chennai’s MA Chidambaram Stadium.

At stumps on Day I of the second Test of the four-match series, India, winning a very important toss, reached 300/6. Rishabh Pant (33 batting) and debutant Axar Patel (5 batting) will resume on Sunday.

India captain Virat Kohli out for a duck on Saturday.
PTI

In Saturday’s final session, England did pull things back a bit by dismissing Rohit, Rahane and Ravichandran Ashwin. There’s not much batting to come for India once the Pant-Patel pair is separated, but whatever runs are added to the total on Day II, it will double the pressure on England because batting is unlikely to be a cakewalk on a track that offered plenty of turn and awkward bounce. Add to that the threat of footmarks and the fact that India have three spinners at their disposal.

Right from the morning session, puffs of dust came off the surface almost every time the ball landed on it. It can only get worse.

The rub of the green, too, went India’s way as many a time prospective catches fell short of the fielder.

The start wasn’t at all good for India as they were yet to get off the mark when Shubman Gill was trapped leg-before by an Olly Stone delivery that shaped back in. Young Stone was indeed impressive, but not so was his senior colleague Stuart Broad. Did England miss James Anderson’s reverse swing? They have their rotational policy to blame for it.

But Rohit deserves all the credit for mastering the conditions.

He gave due respect to left-armer Jack Leach, but whenever Moeen Ali, who was mostly erratic despite cleaning up Virat Kohli for nought, gave him some room, Rohit brought out the sweep shot to perfection.

“The sweep shot is something you know can frustrate a bowler with if you are playing that very well,” said Rohit after the day’s play. “If you play it right, there’s not much the bowler or the pitch can do.

“I thought it was a safer option as both the fielders (deep square and deep fine leg) were at the boundary. It was a percentage shot to play as he (Moeen) was bowling outside the off-stump, and lbw doesn’t come into play… It was also important to be proactive on such a pitch.”

Like Rohit, Rahane too was short of runs going into this Test, but delivered when it mattered most, especially after Pujara and Kohli departed in quick succession. “You can’t be too defensive on this wicket and need to stay one step ahead of the opposition. We had to make them change their game plan,” Rahane told the official broadcasters.

The English batsmen would do well to remember Rahane’s words when they bat.