The 28-year-old is returning to Manchester from Dubai, where he spent time rehabilitating after a thigh injury in November 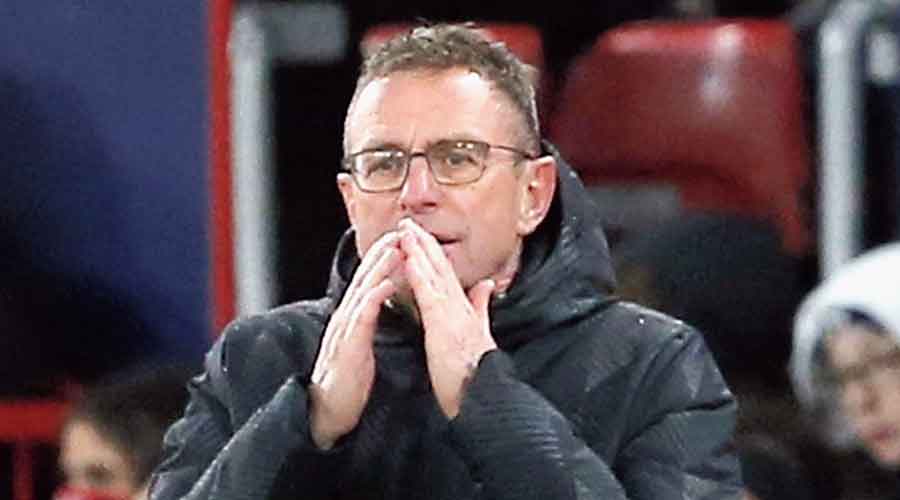 Manchester United interim manager Ralf Rangnick said he did not have to convince players to remain at the Premier League club as media speculation grows over the future of French World Cup winner Paul Pogba.

The 28-year-old is returning to Manchester from Dubai, where he spent time rehabilitating after a thigh injury in November and could yet feature in Rangnick’s plans, despite being out of contract at the end of this season.

United have been in talks with Pogba over a new deal, but the midfielder has frequently been linked with a move away from Old Trafford since rejoining from Juventus in 2016 for a then-world record 89 million pounds ($118.09 million).

“I wouldn’t say he’s not worth keeping but, of course, players have to want to play and stay for a club and a big club like United,” Rangnick said.

“If a player doesn’t want to play for a club like United medium or long-term, I don’t think it makes sense to convince him to change his mind.

“He can be an important player but this is true for all the others ... I’m not just the coach of Pogba, I’m also the coach of all the others and my ambition is to ... improve each individual, this is possible by improving the performance of the team.”

Anthony Martial’s agent said the French forward was looking to leave United due to a lack of game time.

“Anthony wishes to leave the club in January,” Martial’s representative Philippe Lamboley, the executive director of USFA Management, told Sky Sports.
“He just needs to play. He doesn’t want to stay in January and I will speak to the club soon.”

The France striker has started four of United’s 22 matches this season and has yet to feature under Rangnick due to a knee injury.
Rangnick has a wealth of options in attack and it appears that Martial, 26, does not feel that he will be able to force his way into the German’s first team.

Lamboley said on Saturday morning that he would seek talks with the club’s hierarchy in the coming days to try to secure an exit for the forward, who joined from Monaco six years ago in a deal worth up to £58 million.

The Times newspaper reported that Barcelona have been monitoring Martial’s situation with interest.

United resisted attempts by José Mourinho, their former manager, to sell Martial in the summer of 2018 as they felt any sale could come back to haunt them. The board felt that Martial had the ability to go on and become one of the best attacking players in Europe, but he has been an inconsistent performer since.

Written with inputs from agencies