FEDAL AT 20-20: The coming together of the sea and the sky of the sporting universe 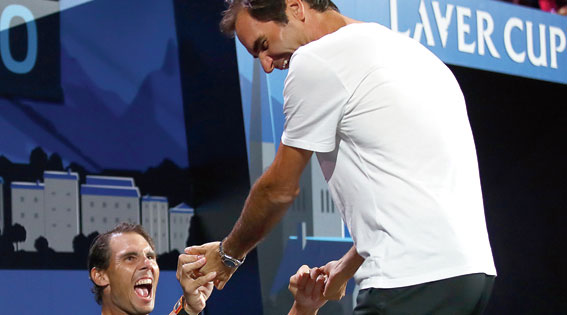 The sea and the sky are opposite forces that are not supposed to meet. The ordered chaos of the former acts as a foil for the infinite imperiousness of the latter. The two are designed to be prisms for one another, to be set against the canvas of nature and appreciated, even admonished, for their contrasting qualities. And yet, the tunes of time are such that they can blend the sea and the sky, uniting them in the harmony of the horizon.

As Rafael Nadal clinched another French Open to go level with Roger Federer at the summit of the men’s game, I felt as if the sea and the sky of the sporting universe had come together, melting into mutual might, even if it were to mark a mirage, a parity forged by the deceit of statistics. Twenty may be a special number, it is certainly a lot of Grand Slams. But can it really lend equivalence to two players who have been, for the best part of this century, utterly inimitable?

Advertisement
The old normal in Paris

No jam-packed audience at the Court Philippe-Chatrier, no scorching early June sun to sap the soul out of opponents, no extra bounce from the usually unforgiving red dirt. None of the traditional factors that had favoured the southpaw from Spain to rule for more than a decade on the Parisian clay. Roland Garros 2020 was meant to be different.

But once the dust settled and Nadal got into his groove, it was the same, old story — a reassuring instance of the all-too-familiar unfolding in the all-too-unfamiliar world of Covid-19. Having broken Novak Djokovic in the opening game of the final, Nadal had made a statement, one he would go on to embellish for the rest of the brutally one-sided contest. Outrun, outmuscled, and outwilled — Djokovic, the owner of 17 majors himself — was played off the court in what must rank among Rafa’s best performances on his favourite surface.

With an unprecedented 13th French Open, a mind-boggling 100 victories in Paris, and the record of being the first man in the Open era to win four different Slams without losing a single set, Nadal had once again left his imprints on the palimpsest of history. But apart from reinstating the old normal in an arena that now oozes the inevitability of his triumphs, Nadal had done something else with his latest victory. He had drawn level with his eternal rival Roger Federer in the numerical race to be the greatest of all time.

I remember the overwhelming relief that had coursed through me when Federer edged out Marin Cilic in a five-set thriller in Melbourne to kick off 2018. A second successive Australian Open had secured the magic number for the Swiss maestro — 20 Grand Slams. Nadal, on 16 at the time, seemed a distant prospect, especially with doubts around his knees. In hindsight, Nadal’s knees have done just fine. His mind and heart have fared even better. Since Federer won his 20th, and till date last, Slam, Nadal has claimed a hat-trick of customary wins at Roland Garros to go with his 2019 championship at the US Open. The two most decorated men in the sport are now locked in the dead heat of greatness.

As someone who has repeatedly professed his admiration for both Roger and Rafa on these pages, this is the perfect scenario for me. No more cat and mouse chases, no more speculation of success entangling rescheduled tournaments, historic performances, and, of course, the effects of ageing. Roger and Rafa now occupy the same statistical abode in the pantheon of sporting immortality, and I would not have it any other way.

Realistically, Djokovic, now 33, could still eclipse both and end up as the one atop the honours list. Just as plausibly, Nadal, a good half a decade younger than Federer, could rack up something close to his once-expressed desire for 25 Slams. But what matters, for me, at this stage is not who is statistically superior. Having transcended the persistent quantitative assessments, I can now dedicate my love for Roger and Rafa to the pure pleasures of a qualitative response.

Just as the palette can simultaneously accommodate the tang of a blueberry cheesecake alongside the sweetness of a chocolate gateau, just as the literary imagination can soar with Shelley as seamlessly as it can float with Keats, and just as an art exhibition can nestle the precision of Da Vinci with the enigma of Van Gogh, so my fandom can now take in the last flourishes of Roger and Rafa without a rerun of cognitive dissonance.

Seeing two of my sporting heroes share the same slice of history has satiated my competitive thirst as a fan. The longing that remains is for Roger and Rafa to sign off in style, which in my refashioned wishlist, need not mean more Slams, just a few more lasso-esque forehands, exquisite backhands, and delectable lobs. No more nervous obsession around who dominates matches, just the unadulterated joy of watching the two decorate games.

If logic and biology are to be considered, Roger Federer will be the first one to go. Probably in 2021. Rafael Nadal, for all his comebacks, should also be on his last surge of the marathon.
Soon enough, the grass and the clay will go back to being mundane elements of mortality to my consciousness, not the turfs on which legends do battle, syncing beauty with belligerence. Soon enough, my collective fascination will be limited to the highlight reel, to the gilded pages of the past.

But soon is not yet now, and between the feverish following of what was and the distant recollection of what will be, there exists the compelling contentment of what is — the feeling that 20 Grand Slams is not really an equaliser, it is simply an enabler; one that has reaffirmed to me that the sea and the sky never actually meet, but in the illusion of the horizon, they tempt us to live through both.

While Federer won his first major at 22 years of age by beating Mark Philippoussis at Wimbledon 2003, Nadal was only 19 when he got the better of Mariano Puerta at the 2005 French Open to register his maiden Slam.

Nadal and Federer have won their signature slams, Roland Garros and the Big W, in the same year on five separate occasions, with the last being in 2017.

Nadal has done the Roland Garros and Wimbledon double twice (2008, 2010) while 2009 was the only time when Federer managed to get his hands on both trophies.

Between winning Wimbledon in 2012 and regaining the Australian Open in 2017, Federer had gone nearly five years without holding a Grand Slam. On the other hand, Nadal’s longest drought lasted for three years, between his ninth French Open crown in 2014 and the much-awaited La Decima  in 2017.

Federer holds an incredible 362 Grand Slam match victories to his name at a win percentage of 86, while the same numbers for Nadal are 282 and 88 per cent, respectively.

Both players possess an astonishing streak of going unbeaten in seven consecutive Grand Slam finals, with Federer achieving the feat between 2003 and 2006, and Nadal replicating it between 2008 and 2011.