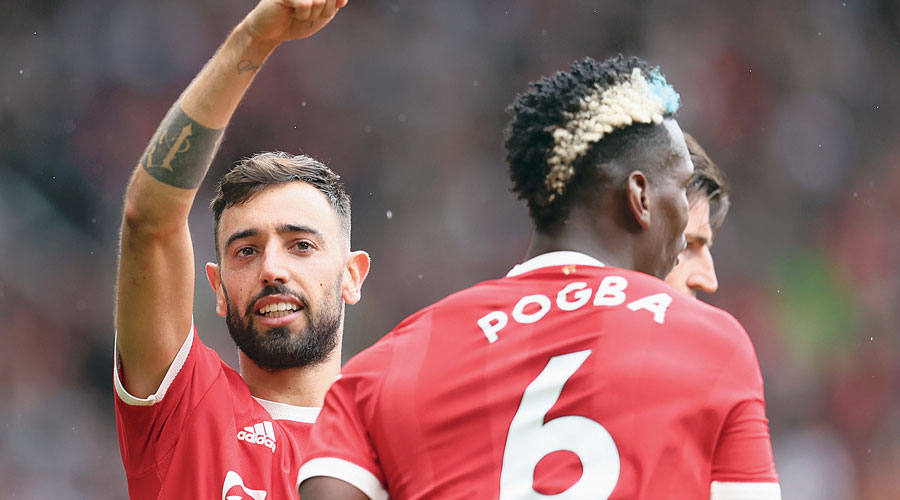 Bruno Fernandes scored his first hat-trick in English football in front of a raucous Old Trafford as Manchester United thrashed Leeds United 5-1 to get their Premier League season off to a flying start on Saturday.

French midfielder Paul Pogba also starred with four assists — one more than he managed in the whole of last season in the league — to help United run riot in front of their first full crowd in 17 months.

Fernandes got the goalscoring underway on the half hour mark, before a Luke Ayling thunderbolt out of nowhere levelled things up three minutes into the second half.

It was only a short reprieve for Leeds, however, as Manchester United livewire Mason Greenwood fired the hosts back in front before Fernandes added a quickfire third to put Ole Gunnar Solskjaer’s side in command.

Fernandes completed his treble with another fine finish on the hour mark, before Brazilian Fred got in on the act to complete the rout and cap a memorable afternoon for the hosts, who laid down an early marker in the Premier League title race.

“My objective every season is being better than the last,” Fernandes said. “Every performance I do, I want to do better and better. I’ve started with three goals but it’s a long way to go.

“We know the quality of the players who have come in, but the team was already very good. We showed it last season but we didn’t win trophies. Our focus has to be game by game. We’ll achieve something with this mentality.”

Pogba missed a glorious chance to open the scoring, slotting wide with the goal at his mercy, and the Yorkshire side then grew into the match with Mateusz Klich forcing a fine save from home goalkeeper David De Gea before striker Rodrigo headed wide.

The hosts, who welcomed new signing Raphael Varane onto the pitch pre-match, began to look nervy with the pressure of an expectant crowd, anticipating their first sustained league title challenge since Alex Ferguson’s final season in 2012-13, seemingly weighing upon them.

But their top goalscorer from last season, Fernandes, came up with the goods once more to settle the nerves, collecting a perfect pass from Pogba before slotting under onrushing Leeds keeper Illan Meslier.

Ayling’s strike from 25 yards out sparked scenes of wild celebration among Leeds’ travelling supporters, who had waited 17 years to see their side truly compete down the M62 motorway at Old Trafford.

Their joy, however, was short-lived, as another sublime pass from Pogba picked out the onrushing Greenwood, with the Yorkshire-born teenager giving United the lead again less than two minutes later.