City, who made nine changes for the game, could still secure it this weekend if United lose at Aston Villa on Sunday 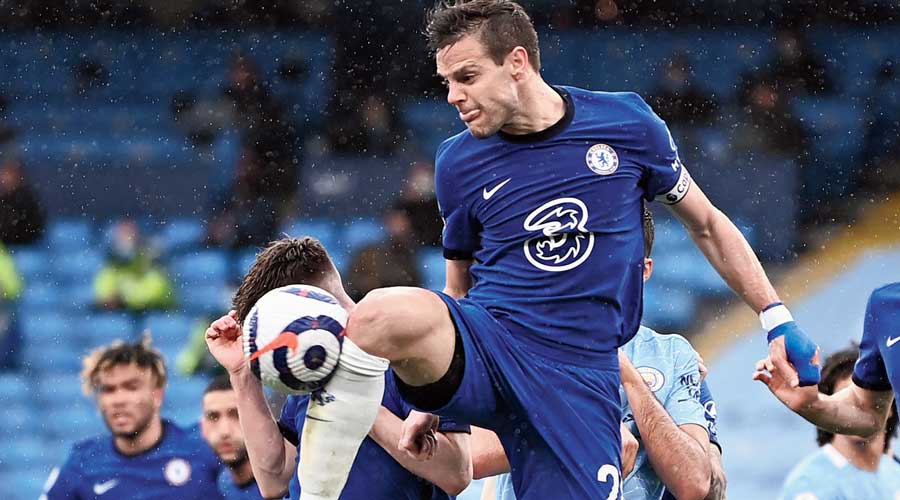 Manchester City will have to wait a little longer to be crowned Premier League champions after they were beaten 2-1 at home by Chelsea on Saturday.

City, who made nine changes for the game, could still secure the title this weekend if second-placed Manchester United lose at Aston Villa on Sunday.

Raheem Sterling put City ahead in the 44th minute and within two minutes they had a chance to double the lead from the penalty spot, but Sergio Aguero’s soft chip down the middle was easily saved by Edouard Mendy.

Chelsea drew level through a low drive from Hakim Ziyech in the 63rd minute, and went on to grab a late winner through Marcos Alonso.

Pep Guardiola on Saturday sent an emotional message for Indians, saying his team was playing for them on the pitch and urged them to stay strong in their fight against Covid-19.

“Pep has sent a message for fans, friends and families in India at this difficult time ... Stay safe,” the club wrote in an Instagram post ahead of their match against Chelsea.

“To all our fans and families around the world, but especially in India, we know these are really tough times and we are fighting for you on the pitch and thinking for all of you.

“On behalf of Team Manchester City and the whole organisation, we wish and pray that you follow all the guidelines to stay safe and look after yourself,” the 50-year-old Guardiola said in a video.

“We can defeat the virus by working together. And hope we can continue to bring smiles to your faces by playing the best football possible. Keep the faith and stay safe please.”

Tottenham Hotspur’s slim hopes of finishing in the Premier League top four faded as goals from Stuart Dallas, Patrick Bamford and Rodrigo condemned them to a 3-1 defeat at Leeds United on Saturday.

Tottenham’s interim coach Ryan Mason, who suffered his first league defeat since taking over from Jose Mourinho last month, rued Harry Kane’s goal being ruled out after a VAR check when the score was 1-1.

“I get it if it is an inch offside,” Mason told BBC. “It is a tight decision but in my opinion it is not offside. You don’t understand the momentum shift that can have in football. It is a totally different mindset at 2-1.”

Leeds dominated the first half and Dallas fired them into a 13th-minute lead when he swept a close-range rebound into the roof of the net after Spurs goalkeeper Hugo Lloris could only parry a mis-hit clearance by Sergio Reguilon.

Son Heung-min levelled in the 25th with a classy finish after Dele Alli put him through with a defence-splitting pass but Leeds were unfazed and Bamford restored their lead shortly before halftime.