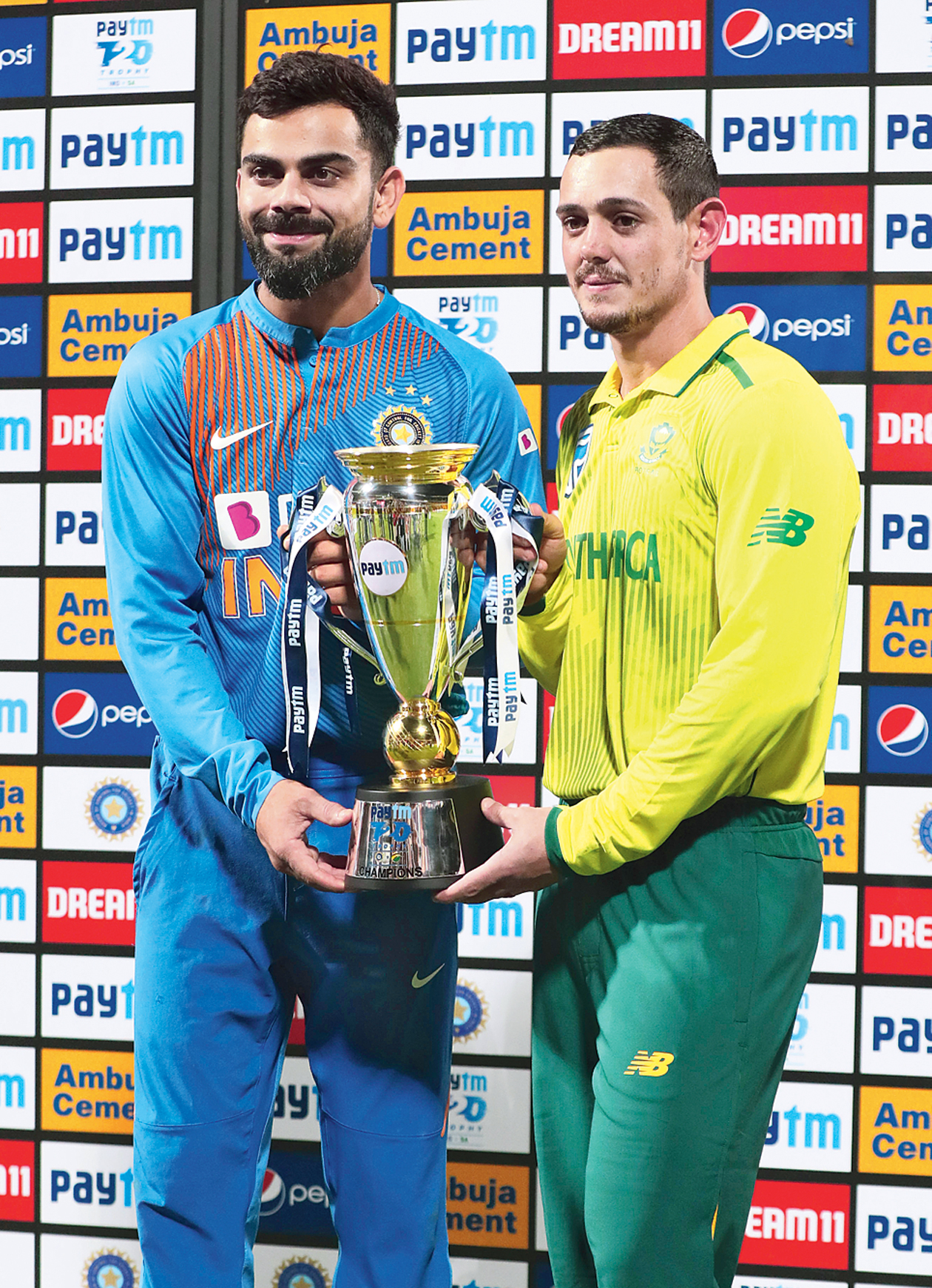 Captain Virat Kohli’s bold move to bat first boomeranged on India in the third and final T20I at the Chinnaswamy on Sunday.

Quinton de Kock (79 not out) spearheaded South Africa’s chase for a nine-wicket win as the series ended 1-1.

To everyone’s surprise, Kohli opted to bat on one of the smallest grounds always known to favour teams chasing in the shortest format.

Initially though, the decision seemed to have worked as India raced to 54 for one after six overs. But the departure of Shikhar Dhawan gave the South Africans an opening and they grabbed it with both hands, snuffing out eight Indian wickets for just 71 runs thereafter.

In their reply, South Africa captain De Kock looked in complete control and struck six fours and five sixes in his unbeaten 52-ball unbeaten 79. He added 76 runs for the first wicket with Reeza Hendricks in 10 overs and then put on an unbeaten 64 with Temba Bavuma.

After moving to 19 without loss in four overs, De Kock cut loose by hitting Navdeep Saini for two sixes and there was no looking back then for the Proteas.

“We kept it nice and simple… Focused on hitting a good length... Our spinners kept it tight too,” Man of the Series De Kock said at the post-match presentation.

Earlier, India were restricted to 134 for nine by a disciplined South African attack. Kagiso Rabada was expensive earlier on, but picked up three wickets, while there were two apiece for Bjorn Fortuin and Beuran Hendricks.

Playing in his first game of the series, Hendricks was the team’s best bowler without a doubt as he choked the run-flow in the middle overs and so did left-arm spinner Fortuin.

“It was just one of those games where things worked for me. I have bowled better than this, though,” Man of the Match Hendricks said.

Dhawan, who began the innings with a boundary, was in charge and had welcomed spinner Tabraiz Shamsi with back-to-back sixes. But going for one too many, Dhawan mistimed Shamsi, who had his revenge after Temba Bavuma completed a neat catch.

Kohli, too, followed suit as Andile Phehlukwayo pulled off a fine running catch at the deep, much to Rabada and his team’s relief. Shreyas Iyer and Rishabh Pant, who improvised to scoop Dwaine Pretorius over the fine leg boundary, threw away their wickets within two balls, leaving India in trouble at 92 for five in the 13th over.

Kohli made it clear that his team won’t deviate from the template of opting to bat first rather than chase on flat decks, going into next year’s T20 World Cup in Australia.

“(This is) exactly what we wanted to do and that’s going to be the template we’ll follow for games we have before the T20 World Cup. The mindset has to be flexible and to try out things when situations are stacked against us,” Kohli said.