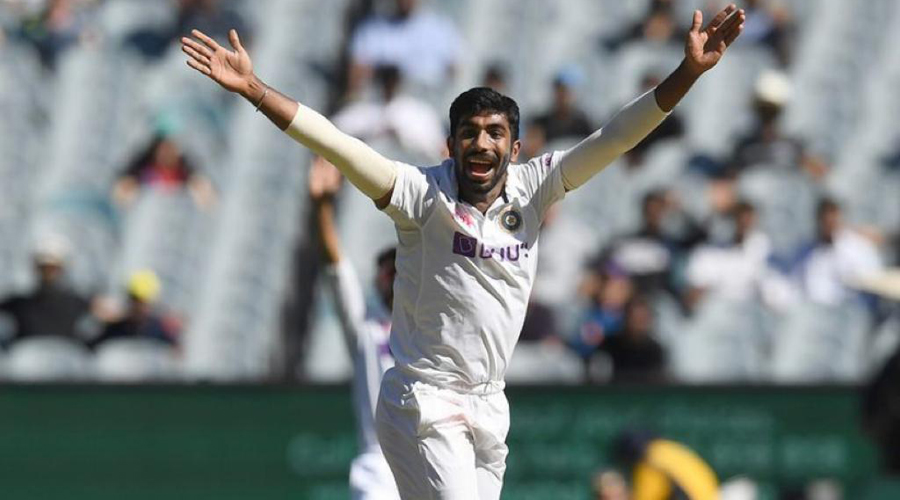 The home series will decide India’s chances of qualifying for the World Test Championship final and a fit Bumrah will be a key factor.
Twitter / @Jaspritbumrah93
Our Bureau   |   Calcutta   |   Published 13.01.21, 03:36 AM

The Indian team is keeping its fingers crossed on Jasprit Bumrah after it emerged that the fast bowler is nursing an abdominal strain ahead of the fourth and final Test at the Gabba, set to begin on Friday.

The Indians reached Brisbane on Tuesday.

The injury is supposed to have occurred during Australia’s second innings on the third day in Sydney and Bumrah even left the field once for medical attention. However, he bowled 25 of the 87 overs that India sent down in the innings.

According to The Telegraph’s sources, the team management is keeping all options open on Bumrah.

“There are still three more days to go for the Test at the Gabba. As of now, he’s near 50 per cent fitness. Let’s wait and see how he progresses. We wouldn’t like to take any chances keeping in mind the home series against England next month,” the source said.

The home series will decide India’s chances of qualifying for the World Test Championship final and a fit Bumrah will be a key factor.

Bumrah, who has featured in three ODIs and three Tests on this tour, has had the maximum workload among fast bowlers from both sides, bowling 117.4 overs across the six innings so far in the Test series.

If Bumrah is forced to miss the Test, the two-Test-old Mohammed Siraj could spearhead the attack along with Navdeep Saini and the uncapped T. Natarajan or Shardul Thakur.

Spin spearhead Ravichandran Ashwin has also been bothered by back spasms and the thinktank is taking a wait-and-watch policy on him too. The off-spinner batted through pain during his herculean effort in the second innings in Sydney.

With Ravindra Jadeja already ruled out with a thumb dislocation, Washington Sundar, who was asked to stay back in Australia after the white ball series to help at nets, may get a chance to play the fourth Test, alongside Ashwin, if he’s fit.

The presence of both Ashwin and Sundar will boost India’s batting since both are considered to be all-rounders. That way Jadeja’s unavailability could be minimised to a certain extent.

Jadeja underwent a surgery on Tuesday and also shared a picture from the hospital bed with his hand wrapped in strappings and tied to his neck. “Out of action for a while surgery completed. But will soon return with a bang!” Jadeja tweeted.

Jadeja was the most successful bowler for India in the first innings in Sydney, picking up four for 62. He also proved his excellence in the field with a sensational throw to run out centurion Steve Smith.

There were further problems after Mayank Agarwal reportedly took a knock in the nets on Monday and is under observation. Agarwal is expected to take Hanuma Vihari’s place in the middle-order.

However, if Ashwin is deemed unfit, India may have to turn to Kuldeep Yadav. The wrist spinner, who was one of India’s finds of their tour in 2018-19, was left out of five of the six white-ball matches and went wicketless in his only first-class game on tour in Sydney.

There’s a school of thought that Kuldeep doesn’t enjoy the confidence of the team management. In that case, they have to consider the option of playing with four bowlers and six batsmen. Prithvi Shaw may return into the scheme of things in such a scenario.