No better Teachers' Day gift than this, says badminton coach on wards' success in Paralympics 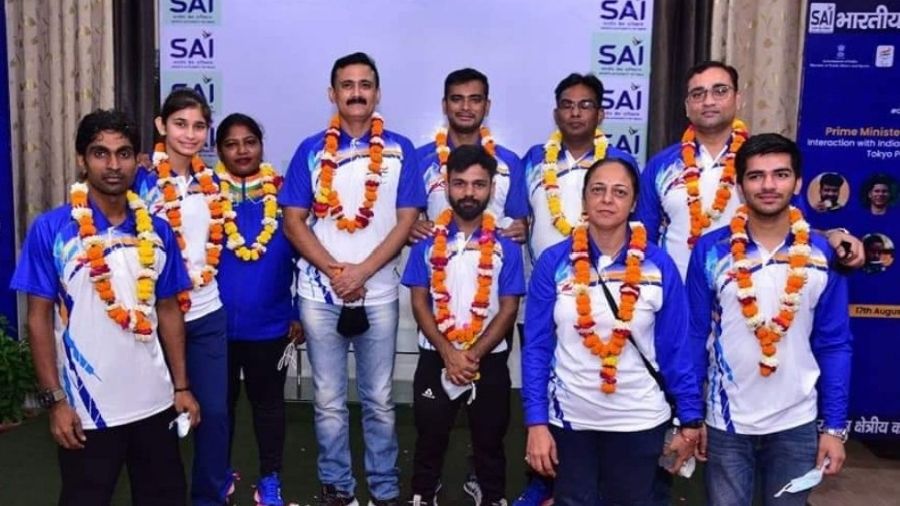 Indian shuttlers claimed four medals, including two gold, a silver and a bronze, at the Paralympics where badminton made its debut this year.
Twitter
Our Bureau, PTI   |   Tokyo   |   Published 05.09.21, 05:04 PM

Overwhelmed by the performance of his wards at the Tokyo Paralympics, India's para-badminton national coach Gaurav Khanna on Sunday said he could not have received a better gift this Teachers' day.

Indian shuttlers claimed four medals, including two gold, a silver and a bronze, at the Paralympics where badminton made its debut this year.

"There can't be a better gift then this. When I had got Dronacharya award, I had a feeling which I couldn't express but this Paralympics with these medals, the feeling is no less than that feeling. I'm overwhelmed," Khanna, said during a virtual press conference.

Khanna was bestowed with the Dronacharya Award last year.

"The targets have been achieved but I am a bit disappointed because I expected medals from Tarun (Dhillon) and Palak (Kohli). We will comeback and take it as a strong learning. If they had won the medals, then we could have delivered six medals."

Asked about the future plans, Khanna said: "I am feeling like as a coach, my exam is over, the session is over, so what's next now?

"The Olympic cycle is over, for the next Paralympic cycle, that is, for 2028, 2032 and 2036, we will have to look for youngsters. In few months, we will have Asian Youth Games, and I am hopeful we will produce good results.

"I am working on some new young and minor players like Palak, who is still young and has also performed outstandingly. I am sure the minor and young players will be in the limelight in few months time and shine like the Paralympic gold medallists."

Khanna, who runs the Gaurav Khanna Excellia Badminton Academy (GKBA), said his academy has all the required facilities and it played a part in India winning so many medals.

"We have all facilities, dedicated courts. Sometimes there are issues with recovery when you play at this level. But now we have sports science, steam bath, ice bath, hydro theraphy, we have all. There has been a great bonding and our professional training have helped us to win the medals."