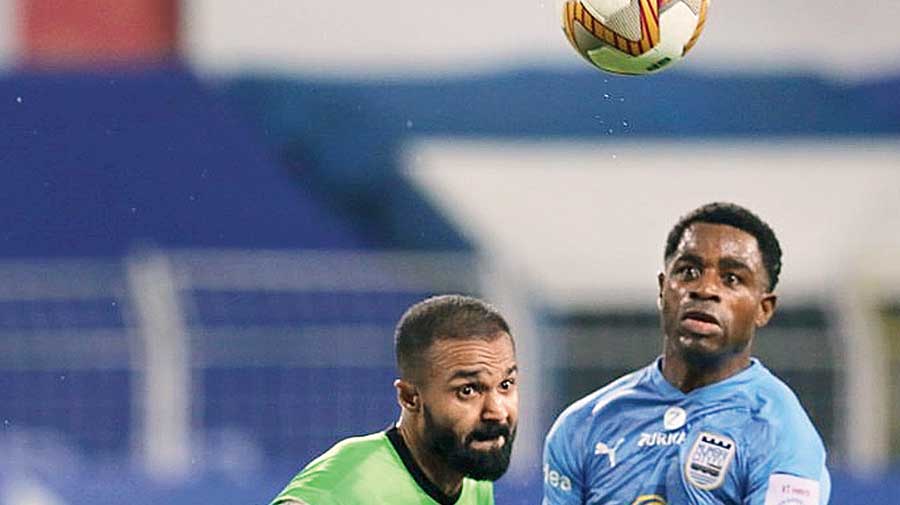 Arindam Bhattacharya (left) makes mess of a simple clearance as Bartholomew Ogbeche is all set to pounce on the ball on Saturday.
Picture courtesy: ISL
Arindam Bandyopadhyay   |   Calcutta   |   Published 15.03.21, 02:02 AM

ATK Mohun Bagan were let down by an inept Arindam Bhattacharya in the ISL VII final against Mumbai City on Saturday. And former India goalkeeper Tanumoy Basu thinks sudden lapse in concentration made matters worse for Arindam.

“He was excellent under the bar for Bagan in most of the matches and rightly won the Golden Glove. But his concentration level was not up to the mark in the final. That was the reason why he erred,” Tanumoy told The Telegraph on Sunday.

Arindam and defender Tiri had faltered quite a few times from the February 19 Derby onwards and Saturday was no different. Tiri scored an own goal after David Williams had given the lead against Mumbai City. The match was decided by Bipin Singh’s 90th–minute winner.

“Look how Mumbai City FC got the equaliser. It was Ahmed Jahouh’s long ball forward and Tiri’s header went in. The Spanish defender made a mistake no doubt but had Arindam been in right position, the disaster could have been avoided. I am not criticising the goalkeeper. It happens during matches but I hope he will learn from the mistakes,” Tanumoy said.

Tanumoy feels Arindam conceded the second goal due to over-confidence. “He made two-three good saves on Saturday. But in the dying moment of an important match, he should have cleared the ball first. Instead he tried to chest it down even when a striker of Bartholomew Ogbeche’s calibre was chasing the ball,” the IFA vice-president said.

Tiri, who had scored an own goal against SC East Bengal too, faced a lot of criticism on social media.

“It couldn’t be, this is football! When we win, we all win and when we lose, we all lose!  I accept all the criticisms that you are making against me, because that will make me stronger.

“I ended up with my head held high because me and the team gave 100 per cent! And I’m very sorry for all of you who only criticise in bad times. I have to tell you that you are going to have Tiri for a long time!” Tiri wrote.

Bagan’s most of the foreign recruits, including coach Antonio Lopez Habas, have left for their respective homes. Roy Krishna and David Williams are supposed to leave in a day or two.