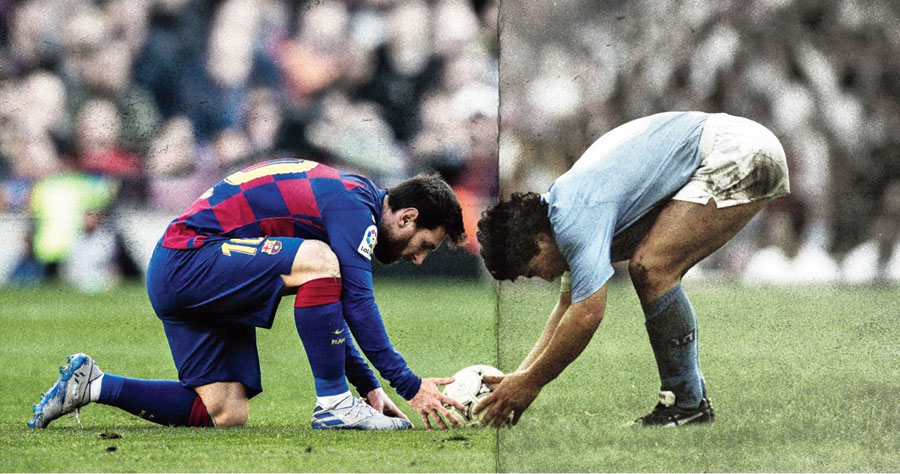 FC Barcelona have posted a graphically merged photo of Lionel Messi (left) and Diego Maradona on their Twitter handle. “The epitome of history. Past & Present. Napoli & Barca. Back on Tuesday,” read the caption
(Picture: Twitter/ @FCBarcelona)
Agencies   |   Madrid   |   Published 24.02.20, 08:00 PM

Lionel Messi has said Barcelona are not playing well enough to win this season’s Champions League but his four goals against Eibar on Saturday were a reminder that with him there will always be hope.

Barca play Napoli in the first leg of the last 16 on Tuesday and will be expected to go through, even if their opponents are on a strong run, having won six out of their last seven matches, including victories over Juventus and Inter Milan.

Yet despite a whirlwind couple of months of political wrangling, remarkably Barcelona approach this tie sitting top of La Liga and with a spring in their step, in large part due to Messi.

His quadruple in the 5-0 rout at Camp Nou on Saturday was cathartic and not only because Real Madrid, whom Barca face in the Clasico on Sunday, failed to regain first place after losing to Levante a few hours later.

“Messi is incredible, he can do things that you only see on Playstation, but we have to try and stop him,” Napoli head coach Gennaro Gattuso, who faced Barcelona six times in his playing days, said.

Messi has scored seven quadruples in his career but none executed amid such an intense time of pressure, with the spotlight on the Argentine.

While other players might have sulked or crumbled, Messi delivered with another breathtaking performance that underlined his ability to drag this troubled team through even the most turbulent of periods.

When Messi climbs up the steps from the moat surrounding the field at the San Paolo Stadium and emerges into the spotlight, he’ll be stepping onto sacred ground.

The ground where fellow Argentina great Diego Maradona achieved some of his most memorable exploits and where the player he is often compared to is still revered with god-like status.

Just ask Alcide Carmine, the owner of a coffee bar in downtown Naples that features an altar dedicated to Maradona.

“For us, Maradona is more than a man. He’s a god. We Neapolitans love soccer and live for soccer,” Carmine said in an interview over an espresso. “We can never forget what he did for us.”

Carmine took possession of the hair in 1990 when he found himself on the same airplane as Maradona while returning from a Napoli away game. “When he got up some of his hair was left on the headrest,” Carmine said. “I kept it and then I had the idea to do this.”

After leaving Barcelona — where Messi now plays — Maradona led Napoli to its only two Italian league titles in 1987 and 1990, plus the 1989 Uefa Cup. He also led Argentina to the 1986 World Cup title, scoring a goal with his fist against England in the quarterfinals that became known as the “Hand of God.”

Napoli had never won anything significant before Maradona’s arrival, and he was treated as a saviour by a city lacking in basic social services.