The Dubai wicket being much better for strokeplay, he latched on to the opportunity to lead his team to a comfortable victory 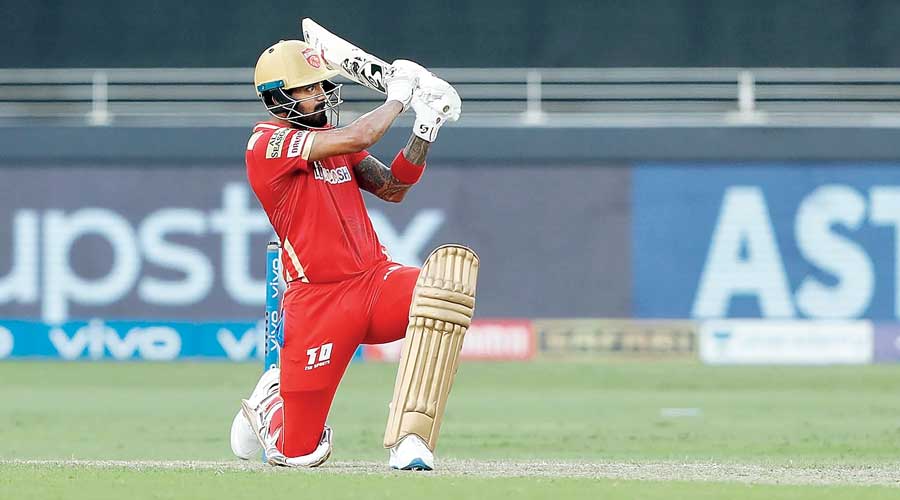 KL Rahul playing blinders to score runs galore and yet Punjab Kings not making enough progress in the IPL has become a familiar occurrence. This season too hasn’t been any different. But then Rahul decided to end their league campaign differently.

Thanks to captain Rahul’s blitzkrieg (98 not out off 42 balls) and their bowlers’ impressive performance early on, Punjab signed off with a bang, thrashing Chennai Super Kings by six wickets with as many as seven overs to spare in their final game of the league phase at the Dubai International Stadium on Thursday.

Opting to bowl first after winning the toss, quicks Arshdeep Singh and Chris Jordan’s early strikes had the Super Kings wobbling at 42/4 in the ninth over, a situation from which they couldn’t really recover. Courtesy Faf du Plessis’ 76, the Super Kings scrambled to a modest total of 134/6.

But the Dubai wicket being much better for strokeplay, Rahul latched on to the opportunity to lead his team to a comfortable victory.

Barring Dwayne Bravo, none of the other CSK bowlers have passed their prime or are in the twilight of their careers, and that makes Rahul’s innings a more special one. Be it playing the pull, the lofted shots over mid-wicket or mid-off, or even the off-drives, Rahul creamed every one, rendering the rival bowlers clueless.

Such was his timing that even a paddle sweep-like attempt off Deepak Chahar sailed into the stands. The rhythm that Rahul, back to being the top run-getter (626) this season so far, is in at present augurs really well for Team India with not too many days left for the T20 World Cup, which will also be held in the UAE.

Punjab, though, have only themselves to blame for their inconsistency. If not for the mess they had made versus Rajasthan Royals, failing to get only four runs off the final over despite having eight wickets in hand, they would have been in a better position on the points table.

As for Mahendra Singh Dhoni and Co., losing three matches in a row going into the play-offs underlines the chinks in their armour, which need to be addressed as early as possible.