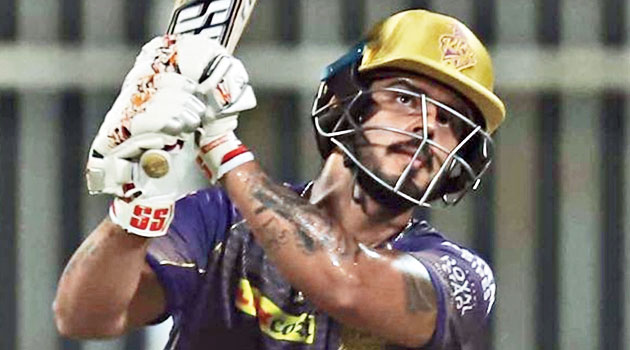 Kolkata Knight Riders’ batting order looks to be out of order. And that could be blamed for their 18-run defeat against the Delhi Capitals at the Sharjah Stadium in Saturday’s second match of IPL 2020.

Sunil Narine, who had scores of 9, 0, 15 opening the innings in the lead-up to Saturday’s game and who has appeared to be terribly out of touch with the bat, was once again sent out as an opener. He was out for 3 this time.

Eoin Morgan, a class batsman in limited-overs formats and someone who is among runs, walked out to bat at No.6, behind an out-of-form Dinesh Karthik, with the team chasing a 229-run target. He smashed 44 off 18 balls in the limited time he got and one wonders how much more he could have got had he been sent higher up the order.

If Morgan, who came in late at No. 6, could re-ignite hopes from such a hopeless situation  — when KKR needed 112 off 43 balls — he might well have done even better had he faced more balls.

Delhi Capitals captain & MoM Shreyas Iyer during his unbeaten 88 against KKR in Sharjah on Saturday.
PTI

The Capitals soared to the top spot in the standings, by virtue of having a better net run rate than Royal Challengers Bangalore, who too have the same number of points — 6.

Delhi Capitals’ innings was built on the foundation laid by Prithvi Shaw (66) at the top of the order and was bolstered then by captain Shreyas Iyer (88 not out of 38 balls). Iyer’s magnificent and classy stroke play, together with Rishabh Pant’s 17-ball 38, helped them post the highest total so far in IPL 2020.

With as many as 78 needed to win off the last four overs, Knight Riders piled up 47 off over numbers 17 and 18 to come back into the game. Along with Morgan, Rahul Tripathi (36 off 16), who is basically a top-order batsman but came out to bat at No.8, tried his level best, but the task was too tall.

Fortunately for Delhi Capitals, Anrich Nortje, the pick of their bowlers, cramped Morgan for room and had him holing out to deep square leg off the third ball of the penultimate over. Marcus Stoinis’s yorker had the better of Tripathi and with that ended the Knight Riders’ hopes of an unbelievable win.

Much was expected from Andre Russell at the Sharjah Stadium which has shorter boundaries, but the all-rounder’s problems against short and back-of-a-length deliveries continued.