It was canny captaincy that ensured 91 for no loss turned into 125 for 8 and before one realised, it seemed there was only one team on the park 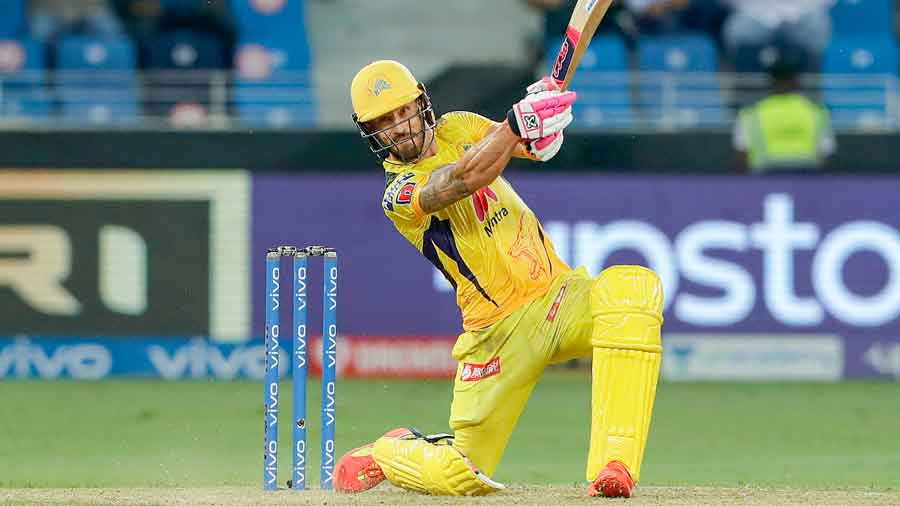 Faf du Plessis of Chennai Super Kings during the final of the Indian Premier League 2021 between the Chennai Super Kings and the Kolkata Knight Riders, at the Dubai International Stadium, UAE, on Friday.
PTI photo
Our Bureau   |   Calcutta, Dubai   |   Published 16.10.21, 12:18 AM

Mahendra Singh Dhoni played his part to perfection in an extraordinary script as he led Chennai Super Kings to their fourth Indian Premier League title, outwitting Kolkata Knight Riders by 27 runs in a one-sided final on Friday.

As the final delivery was bowled, the old 'Band Master' had that lingering smile at the far corner of his lips having orchestrated his 'Men', who knows may be one last time.

Unarguably, the most loved and revered Indian captain of all time led a team of old warhorses with oodles of experience as they first posted a formidable target of 192 for 3 and then squeezed Knights for only 165 for 9 despite a promising opening stand of 91 between Shubman Gill (51 off 43 balls) and Venkatesh Iyer (50 off 32 balls).

It was canny captaincy that ensured 91 for no loss turned into 125 for 8 and before one realised, it seemed there was only one team on the park.

Kolkata Knight Riders had won the toss and elected to field against the MS Dhoni-led outfit.

Both teams fielded unchanged XIs from their respective last games. While Dhoni played his 300th T20 game (all formats) as captain, KKR got inspiration from the fact that they have won their last six games where they have chased targets.

CSK started off as favourites against KKR on 'Dussera' day but in terms of trophies, there hasn't been anything separating the two.

KKR had won both their finals under the mercurial Gautam Gambhir. No team has mastered the art of reaching finals like Dhoni's CSK.

Here are the teams: