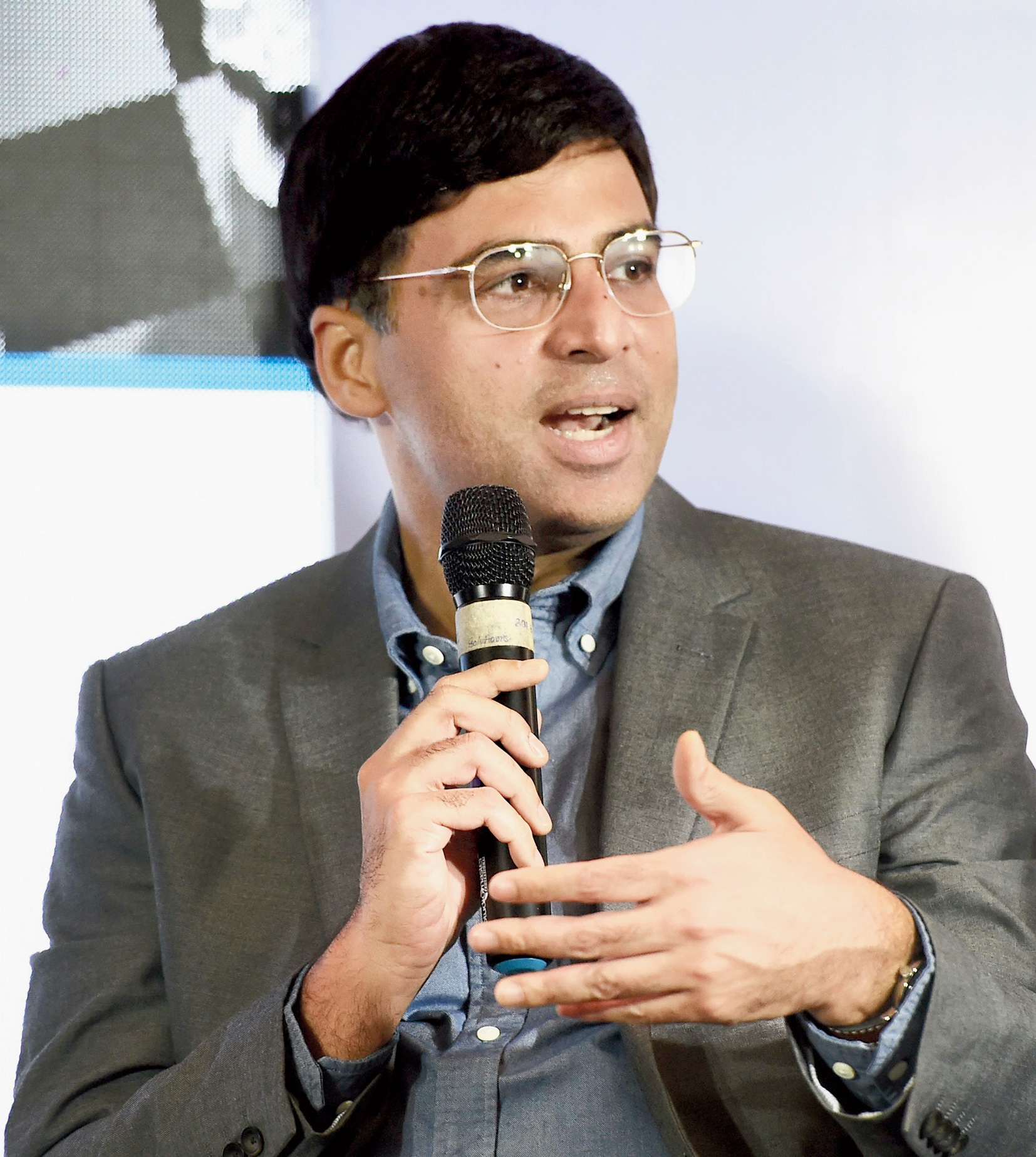 Viswanathan Anand, a five-time world chess champion and national icon, spoke to The Telegraph the other evening.

Few mega achievers, by the way, are as modest as Anand. Little wonder, then, that he has always been admired.

Q Your state, Tamil Nadu, is among the more politically conscious ones. Could we see you going the Rajinikanth and Kamal Haasan way?

A No... Of course, I’m politically aware, but I don’t get into every detail. Not that I don’t try and listen to a conversation on politics. It’s about (gathering) information... That Rajinikanth and Kamal Haasan could enter politics had been whispered for years before they actually did so. In Rajinikanth’s case, people had been expecting that step for such a long time that, when he did take the plunge, it was like ‘okay, he’s done it’... Right now, it’s mixed in Tamil Nadu and the actual test will be in 2021.

A (Emphatically) Because I can’t see myself becoming a politician. It’s not about compromising... Like chess, you have to be fascinated by politics and, like sport in general, you need to spend a lot of time before you become successful. Politicians must create a base and campaign endlessly. I can’t see myself doing that. I’d rather spend time on my hobbies, read up a subject which interests me.

Q Imran Khan struggled for 22 years before his Pakistan Tehreek-e-Insaaf came to power a few months ago...

A Well, yes. Politics may look easy, but it is not.

Q It’s not unusual for big names from other fields to enter politics and make a mark. Your take?

A I have constantly been seeing people switching careers and that has happened a lot in chess too. I’d say go for it if you have the skills set to define something else which engages you... One of the perspectives you have in life, when you are nearing 50, is that if something really fascinates and motivates, then go for it. Everybody doesn’t succeed or win, but if the game (of politics) interests you, go ahead.

Q Some words on one-time rival Garry Kasparov, who has been a fierce critic of Russia’s supremo Vladimir Putin?

A When Garry finished as a regular chess player 13 or so years ago, I’d thought he would become an author for he’d been wanting to write books. Instead, Garry got involved with some causes. I always felt he was more of an activist rather than a politician. Garry advocated causes he never expected to win, but highlighted them nevertheless. I think his Russia activism falls in that category. Personally, I see Garry more as an author or a speaker... He is not quite involved with chess now, but still follows the game at a high level. Garry hasn’t dropped off completely.

[Incidentally, Kasparov, now 55, has authored a number of books.]

A Yes, but I cannot tell you of the impact Garry has been having. I really don’t know much about politics in Russia.

Q Have you met Kasparov in recent years?

A We have met, yes, a few times in a tournament in the US (Sinquefield Cup in St Louis).

Q To talk of the all-time greats... Where would you place Kasparov?

A Difficult to compare, but some say (reigning world champion) Magnus Carlsen is already the greatest. Some say Bobby Fischer or Garry... I didn’t play against Fischer, but have against the other two. Garry rarely plays and, so, Carlsen would have to be seen differently... Most agree that Fischer, Garry and Carlsen would figure in some order in the top three.

Q You’ve been travelling the world from the 1980s... What, for you, has been the biggest change in India?

A We used to be a closed economy then, not so now.

Q I assume you had trouble getting foreign exchange in the India of the 1980s...

A (Smiles) Indeed. In the first seven years of travelling, from 1983, I spent more time figuring out how to get foreign exchange approval than preparing for the tournaments! Much of my parents’ time went arranging for the travellers cheques. Back then you didn’t, after all, have forex or credit or debit cards... Also, if I wanted to know about a city overseas, I had to find a person in Chennai who’d been there to answer my queries. India has greatly benefited from the IT revolution and everyone knows about everyone. You can just search the net.

Q Isn’t there too much information available on different platforms?

A More information doesn’t always mean you are better informed.

Q What about the change in India’s image?

A It has certainly improved and India is seen more positively. People abroad used to have some strange views about India, just like some in India had strange views about men and women overseas... We Indians are no longer perceived as snake charmers! That thinking, fortunately, has gone... Today, Indians are so much more international... Hordes travel overseas and students in massive numbers study overseas.

Q Message for the very young?

A Not for anybody in the 12-13 age group, for that’s very young... For the older ones... I’d say focus and enjoy what you are doing, as the results will take care of themselves... But I’d be a bit worried if a teenager did take my advice as he/she should experience life as a teenager. Advice comes from the perspective of someone else.

Q Finally... You haven’t just been a champion, but a terrific ambassador for India and for sport. When you do say ‘no more’, how should one view your legacy?

A I think I have already made a difference in the way chess is seen in India and the way it is followed... Globally also... That, I reckon, would be my legacy.