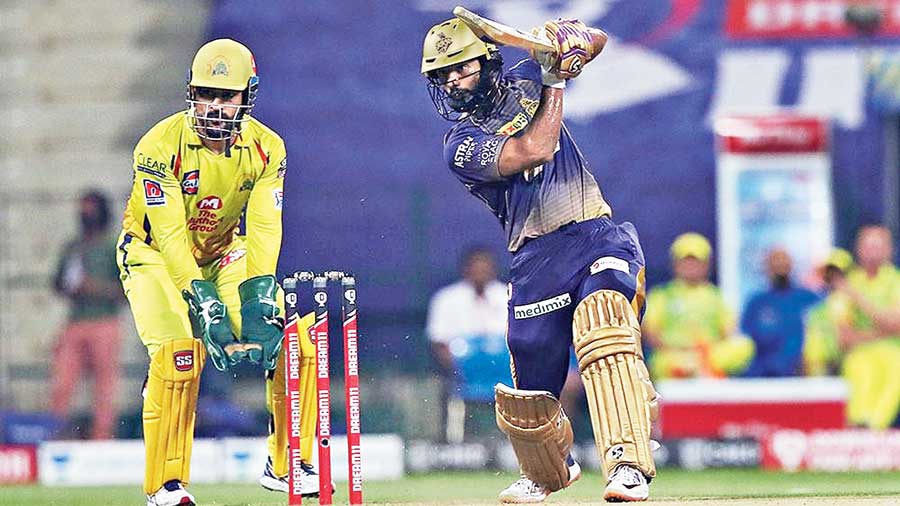 Kolkata Knight Riders brought about the much-needed change in their batting order and achieved the desired outcome — a precious 10-run win over Chennai Super Kings at the Sheikh Zayed Stadium in Abu Dhabi on Wednesday.

The in-form Rahul Tripathi was promoted to open alongside Shubman Gill and he delivered with a quality knock of 81 that pushed the team total to 167 after KKR won the toss and opted to bat.

Sunil Narine, rightly demoted from the opener’s slot to No. 4, accounted for the prized scalp of Shane Watson (50) and bowled perfectly on a pitch which had been used for the Mumbai Indians-Rajasthan Royals match on Tuesday.

From overs 10 to 15, the Super Kings couldn’t hit a boundary, with the spin duo of Narine and Varun Chakravarthy doing enough to restrict the scoring rate. And then Andre Russell was immaculate at the death, picking up the crucial wicket of Sam Curran in over No. 18, which was also his first. It made the equation all the more harder for the three-time champions.

Courtesy this victory, the Knight Riders move up to third in the standings with six points, while the Super Kings are fifth with four.

No wonder principal owner Shah Rukh Khan, present at the ground with his daughter Suhana, was a worried man at the halfway stage of the CSK run chase when a KKR victory didn’t look possible.

The Super Kings were 99 /1 in 12 overs and in cruise control mode, but Dinesh Karthik held Sunil Narine back entirely for the death and that paid off. As the asking rate mounted, Dhoni’s men floundered.

Captain Karthik will certainly breathe a little easy although he failed to score runs again in spite of sending Eoin Morgan out to bat ahead of him.

Tripathi’s classy showing should reduce KKR’s worries as far as their opening combination is concerned. He scored nearly half of the team total with 17 (by Narine and Pat Cummins) being the second-highest individual score in the KKR innings.

Regardless of the slowness of the pitch, the Super Kings were cruising towards the target with Watson and Ambati Rayudu batting really well. Off the last 10 overs, they needed only 78, but after Kamlesh Nagarkoti had Rayudu holing out in the deep, Narine rose to the occasion.

He was brought on in the 12th over of the Super Kings’ innings, and ensured he didn’t take much time to dismiss Watson for the ninth time when he trapped the former Australia all-rounder leg before.

Watson’s dismissal and Mahendra Singh Dhoni’s painstaking 12-ball 11, before Chakravarthy knocked behind his middle stump, gradually turned the game in favour of KKR.